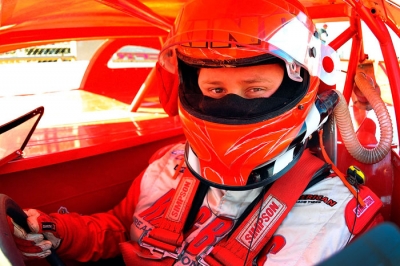 Russ King is closing in on a grand reward for his long, tough season spent getting a dirt Late Model education on the World of Outlaws Late Model Series. With just three events remaining on the 2009 WoO schedule following the wash-out of last weekend's Midwestern doubleheader, the hard-nosed King finds himself on the verge of clinching the tour's Rookie of the Year award.

King, 20, of Bristolville, Ohio, holds a 148-point lead (3,604-3,456) over Jordan Bland of Campbellsville, Ky., in the Rookie of the Year standings, which are determined using drivers' 30 best finishes of the '09 campaign. The only way King can lose the crown is if he fails to finish 20th or better in at least one of the 50-lappers that make up the season-ending World Finals on Nov. 5-7 at the Dirt Track at Lowe's Motor Speedway in Concord, N.C., and Bland wins the two headline races in an unprecedented sweep.

Yes, King is so close to the rookie laurels, he can taste them. But while clinching the honor over a tour-record five-driver rookie class will bring him plenty of attention, he'll be just as proud to finish 10th in the WoO points standings — the last spot that offers a share of the tour's nearly $400,000 points fund.

“Our goal this year is the Rookie of the Year, but we also want to finish 10th in the points,” said King, who is guaranteed the coveted 10th-place position provided he enters the Topless Showdown on Oct. 14 at The Dirt Track (a non-points event) and starts one of the World Finals features. “Winning the rookie deal and finishing 10th in the points means over $30,000 to us. After driving around all season to do this, you want to go home with something substantial like that.”

King stands to pocket $10,000 for the Rookie of the Year crown plus another $21,000 for rounding out the top 10 in the star-studded WoO points standings — a huge chunk of change for a young lion who entered the 2009 season with fewer than two-dozen dirt Late Model starts. His six-year career has mostly come behind the wheel of a big-block modified, the Northeast-based division that his father, Rex Sr., has run for more than 20 years and his younger brother, Rex Jr., now regularly competes in.

King is bidding to become the third consecutive and fourth overall driver with big-block modified roots to win the WoO Rookie of the Year award since 2004. He would join New Yorkers Tim McCreadie (2004), Tim Fuller (2007) and Vic Coffey (2008).

“We've learned a lot this year,” said King, who drives family-owned equipment. “I wish we would've run better, but we know coming into this that it was gonna be tough to run against the best guys in the country at tracks we've never seen. Hopefully what we learned this year will help us down the road.”

King has certainly showed that he's catching on to the Dirt Late Model game. After getting off to a slow start with five DNQs in the season's first nine events, he's started 27 of the last 28 events. He's been especially solid during the critical stretch run; in the seven races contested since the schedule reached the 30-event mark and the rookies began replacing their worst finishes, King hasn't missed a feature and has recorded four of his rookie-leading eight top 10 finishes.

Though King passed Bland for the rookie points lead and 10th place in the standings after the June 24 event at Big Diamond Raceway in Forestville, Pa., and has never relinquished the positions, it's his strength over the last seven shows that has allowed him to pull away. He enters the Topless Showdown with a top-10 finish in four of his last five starts, including a 10th on Sept. 6 at Tri-City Speedway in Franklin, Pa., that came after his second-place heat run put him in the feature redraw for the first time in his career.

King, whose top finish of '09 is a ninth on July 10 at River Cities Speedway in Grand Forks, N.D., has already replaced his six 75-point DNQs with better finishes in the Rookie of the Year points computations. The worst remaining finish on his 30-race ledger is a 21st place (108 points).

The 20-year-old Bland, meanwhile, boasts the best single finish by a rookie to date this season – seventh on June 18 at Ohsweken (Ont.) Speedway – but he's separated from King by his fewer top 10 finishes (three) and more DNQs (nine). His hopes of putting some pressure on King entering the World Finals were dashed when last weekend's rainouts at I-55 Raceway in Pevely, Mo., and La Salle (Ill.) Speedway robbed two races from him.

But while Bland will be disappointed if he falls short of the rookie trophy with his family-owned team, he asserted that the experience he gained following the WoO this season has made him a better driver.

“It was definitely hard trying to figure out a new (Bloomquist Race Car) chassis while racing against the best drivers in the country at a new track every night,” said Bland, who has firm control of 11th in the points standings. “The flip (a wicked crash on June 21 at Ontario's Cornwall Motor Speedway that forced Bland to visit a local hospital for a checkup before returning to run the feature) set us back too, but I've learned more this year than I ever have in my career. Being able to watch these (WoO) guys every night — their good laps and their bad laps — helps you so much.”

Joining King and Bland as Rookie of the Year candidates with perfect attendance on the '09 WoO are Brent Robinson of Smithfield, Va., Dustin Hapka of Grand Forks, N.D., and Tyler Reddick of Corning, Calif.

Robinson, 21, has shown flashes of success in his family's red-white-and-blue cars, but he couldn't quite challenge King and Bland. He's third in the rookie race and 12th in the overall WoO points standings, with a ninth-place finish at Ohsweken standing as his lone top 10 of the season.

A newcomer to open-competition Dirt Late Model racing in 2008, Hapka, 26, decided to hit the highways immediately this season and sits fourth in the rookie and 13th in the overall standings. He has started 17 of 37 features and has a top finish of 12th, at Ohsweken.

Reddick, who at 14 years old is the most fresh-faced rookie contender and ranks 14th in the overall points standings, burst onto the WoO scene in dramatic fashion when he qualified through a heat for the season opener on Feb. 12 at Volusia Speedway Park in Barberville, Fla., to become the youngest driver in tour history to start a feature. He experienced plenty of growing pains after that spectacular debut — he's started just 13 of 37 A-Mains and has a top finish of 13th, at River Cities — but the cool-headed driving and natural talent that he's displayed have impressed.