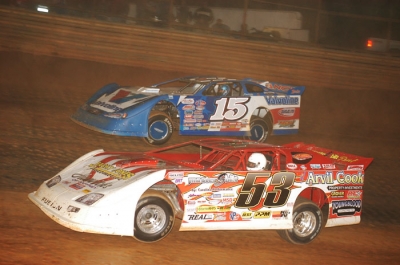 BULLS GAP, Tenn. (Oct. 13) — Ray Cook of Brasstown, N.C., posted his career-best World of Outlaws Late Model Series performance with a second-place finish at the Tennessee Fall Brawl. Cook, 36, earned $10,625, including the tour’s $500 bonus for the highest-placing driver who isn’t ranked among the top 12 of the points standings and has never won a series event.

“It means a lot to get a good finish in one of these big shows,” said Cook, who used American Racer tires in a Volunteer Speedway field dominated by Hoosier-shod cars. “We ran good in the Scorcher, and we brought that setup back and tried to build off of it.

“We got off to a good start, but I was getting a little loose in after a few laps. I just couldn’t drive up in there as hard as I wanted to, and of course, when you’re loose in, it makes you tight off.

“I feel like we had a third-place car,” he said, recognizing Jimmy Owens' misfortune, “but a little luck got us into second.”

Chub Frank of Bear Lake, Pa., entered the Oct. 12-13 Tennessee Fall Brawl weekend 40 points behind WoO leader Steve Francis, and he didn't have much chance to gain ground with Francis winning the $20,000 event. Frank stands 62 points behind the leader with just two feature events remaining on the tour the first weekend of November at the Dirt Track @ Lowe's Motor Speedway in Concord, N.C.

Frank, who qualified through a consolation after battling handling problems in Friday night’s heat action at Volunteer, settled for an 11th-place finish. “We weren’t very good all night,” said Frank. “I don’t know what to do at this place.”

Randy Weaver of Crossville, Tenn., also registered a career-high finish in WoO competition with third place. “Halfway through the race I felt like we were better (than Cook), but I got together with another car trying to make a move on the outside and that messed up the toe on the car,” the 38-year-old Weaver said. “I had to fight a little ill-handling car at the end. I could get to Ray, but unless he messed up, I wasn’t gonna get him.”

Fourth-finishing Scott Bloomquist, meanwhile, felt he had a winning car, but he couldn’t get through traffic on the difficult track. “Every time we had a lap in the clear, we were considerably quicker than the leader,” said Bloomquist, the 2004 WoO champion. “I think Jimmy (Owens) and I were definitely the two fastest cars, but we just didn’t have a racetrack to prove it.

“You’ve never had to hook your left-side tires on the bottom in (turns) three and four at this place. It didn’t matter how good you were (running) high in one and two — if you got outside a guy, you couldn’t do nothing with him in three and four.

“It’s kinda hard to go from behind a guy to all the way in front of him in one end. You need the other end to at least be able to stay beside him.”

WoO rookie Brian Shirley of Chatham, Ill., enjoyed a strong run at the Tennessee Fall Brawl after failing to qualify for August's Scorcher 100 field. Shirley, 26, moved forward from the 14th starting spot to reach sixth at the finish.

“The bottom line is, we had a good car that was capable of running there until somebody made a mistake,” said Shirley, who drove Ed Petroff’s Rocket No. 3s. “If you didn’t have a real good handling car, you couldn’t hit the same line that you needed to every lap. My car was good enough that I could hit that line every lap and take advantage of other guys slipping up.”

Rick Eckert of York, Pa., who started 22nd after grabbing the final transfer spot in the second consolation on the last lap, rallied to finish 10th at Volunteer. ... Three drivers — Josh Richards of Shinnston, W.Va., Ricky Arms of Moss., Tenn., and Roy Mitchell of Hobart, Ind. — pulled into the infield with mechanical trouble during the race’s pace laps. Only Richards was able to get back on the track, but after his crew hastily installed a new driveshaft, he slid onto the track in turn one as the leaders completed the first lap and was immediately put down one lap.