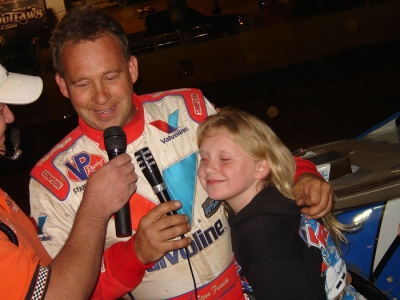 The winner's daughter joined him in victory lane. (Kevin Kovac)

Francis, 40, of Ashland, Ky., holds a 62-point edge over Chub Frank of Bear Lake, Pa., who finished 11th, heading into the two feature events that make up the Outlaws World Finals on Nov. 1-3 at the Dirt Track @ Lowe’s Motor Speedway in Concord, N.C.

“It ain’t over yet,” cautioned Francis, the WoO points runner-up in 2004 and 2005. “I’m happy that we’re finishing the season strong, but we still have to put together two more good nights to finish the points deal up.”

Francis, who started from the outside pole, was flawless. He passed polesitter Ray Cook of Brasstown, N.C., for the lead on lap 22 and never looked back in his Valvoline Rocket No. 15.

After Jimmy Owens of Newport, Tenn., saw his bid to overtake Francis end with apparent mechanical trouble on lap 62, the Kentucky Colonel was essentially home free. He handled late-race lapped traffic and beat Cook’s MasterSbilt mount to the finish line by 2.473 seconds.

Randy Weaver of Crossville, Tenn., advanced from the ninth starting spot to finish a close third in the D&R Racing GRT car, followed by 10th-starter Scott Bloomquist of Mooresburg, Tenn., in a Team Zero chassis of his own design and third-starter Dale McDowell of Chickamauga, Ga., in the Childress Vineyards Rocket.

Francis’s triumph was his fourth of the season on the WoO and his first-ever at Volunteer Speedway, a 4/10-mile, high-banked oval that he’s struggled to master. He did capture a 12-car charity Super Late Model race (worth $5,000) at the track on Aug. 21, but his ninth-place finish in the Scorcher 100 two days later left him uncertain about his chances on Saturday night.

“I wasn’t very confident coming here because I didn’t run good last time,” said Francis, who registered his 14th career WoO victory. “I was just hoping to maintain what I had (as a points lead), so I’m just tickled to death to get something extra out of it.

“This is kind of the hometrack for Scott, Jimmy and those guys,” he added. “They come in and beat us at our hometracks a lot of times, so it feels good to finally get a win at their place.”

Francis was outgunned for the lead at the start of the 100 by Cook, but he soon realized that his Custom-powered machine wasn’t going to fade.

“Ray fired out there and I thought he was gonna be really, really good,” said Francis. “Then, all of a sudden, it looked like he got really loose. I got up to him and showed him the nose two or three times, and then he kinda moved down and gave me the top of (turns) one and two.

“My car was so good around the top of one and two, once I got out there we were able to clear him down the backstraightaway.”

Owens, who started fifth in the Reece Monuments Bloomquist No. 20, passed Cook for second on lap 27 and was closing on Francis when the race’s first of three caution flags flew on lap 45, for the stopped car driven by Knoxville, Tenn.’s Mark Douglas. The Newport Nightmare continued to challenge Francis until shortly after a lap-58 caution period for Donnie Moran of Dresden, Ohio, who slowed with a flat left-rear tire.

A wicked vibration in Owens’ car caused him to cede second back to Cook on lap 60, and two circuits later he slowed to bring out the race’s final caution flag. He pulled into the infield and didn’t return, derailing his hopes of duplicating his victory over Francis in last month’s World 100 at Eldora Speedway in Rossburg, Ohio.

“The car just got real loose in the corners,” said Owens, who came within five laps of winning the Scorcher 100 at Volunteer two months ago. “I thought it was the rearend, but it doesn’t look like that was the problem. I’m not sure what happened yet.”

Owens paused, and then jokingly added, “I’ve been known to pull in for no reason – and if I did it tonight, I’m gonna be sick. I think we had a good car and might’ve had a chance to get (Francis) in lapped traffic.”

Francis never knew that Owens drew close to him, but he wasn’t surprised to hear such a report following the race.

“When you get in lapped traffic at a high-speed place like this, I knew somebody had to be close to me,” said Francis. “I was just trying to make sure I never gave the bottom of (turns) three and four up.”

Actually, after Owens departed, no one threatened Francis. Cook spent the final laps holding off Weaver and Bloomquist, who slid by McDowell for fourth on lap 94 after spending more than 10 circuits battling for the position.