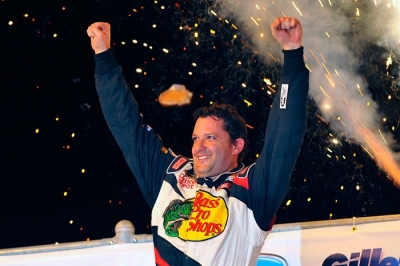 ROSSBURG, Ohio (Sept. 9) — Each year, Tony Stewart invites many of his fellow NASCAR drivers to his half-mile dirt track. And more often than not, they end up chasing him to the checkered flag.

The sixth-starting Stewart, a two-time Sprint Cup champion, took the lead from inaugural race winner Kenny Wallace on the 13th lap and led the rest of the way of the charity all-star race for Dirt Late Models. Stewart won his second Prelude in a row and third in five years. | Prelude slideshows

Polesitter Clint Bowyer, who fields a Dirt Late Model team for Georgia veteran Dale McDowell, crossed the finish line more than three seconds behind Stewart. Kyle Busch, Ryan Newman and Matt Kenseth rounded out the top five. Cruz Pedregon, the NHRA funny car champion who has taken a liking to oval dirt racing, advanced nine positions to finish sixth in a race slowed by four cautions. Wallace, who led the first 12 laps, dropped out after 20 laps with a flat tire after tangling with Bowyer.

“We had a lot of fun tonight. This makes up for the spring rainout for sure," Stewart said. "What a great race with Kenny Wallace, Clint Bowyer, Rowdy Busch, Ryan Newman and Kasey (Kahne) — we had an awesome run there. We got lucky to get by them on the top and then to get by Kenny was great.

“This was probably the best I’ve run in the Prelude. We won last year, I think we led the whole thing, but this was one I had to work for. We weren’t exactly perfect, and we weren’t perfect because I hit the wall on the first two starts right off the bat. I’m sure there is a lot of bent up stuff on this Rocket Chassis car, so I’m just really proud of Mark and Josh Richards and all of these fans here and that watched tonight. This is something that took a lot of time and effort, not on my part, but with everyone involved with this event here at Eldora Speedway. They have just done an awesome job of helping us to raise thousands of dollars for these charities."

With Stewart playing the role of track owner and racer, Bowyer didn't feel too bad about seeing him win.

“He works his butt off for this event. Man, it's only right that he does win it. You put in that much work into something and he wants to win, too," Bowyer said. "He's a competitor and he runs good. He's one of the best racers in the world, and he showed it again tonight."

Notes: Stewart's Rocket Chassis is sponsored by Old Spice, Office Depot and Bass Pro Shops. ... A.J. Allmendinger crashed on the first lap. ... A lap-13 accident involved Ken Schrader, Robby Gordon, Casey Mears, Joey Logano and Marcos Ambrose. ... Mears spun for another yellow on the 20th lap. ... The event was a makeup after June's rainout. ... The event drew a capacity crowd of more than 23,000 and thousands more on HBO Pay-Per-View.