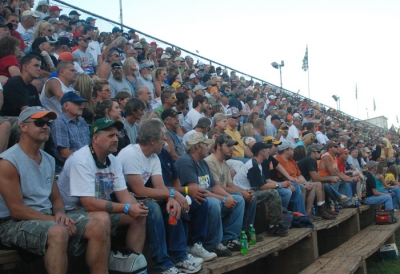 Among past Hillbilly 100 winners expected at the Middlebourne, W.Va., track, which has hosted the event since it moved from Pennsboro (W.Va.) Speedway after the '97 season, are Bart Hartman, Steve Shaver, Earl Pearson Jr., Eddie Carrier Jr. and last year's winner, Jimmy Owens.

Tyler County's biggest event is more than just race as the community of Middlebourne hosts its fourth annual Hillbilly Days, giving fans something to do at the racetrack or in town. Entertainment for Hillbilly Days includes live music, merchant specials, a street fair, softball tournament and more.

ANOTHER STRONG MASTERSBILT RUN: Ray Cook of Brasstown, N.C., continued his 2009 resurgence Aug. 29 with his Lucas Oil victory at Bluegrass Speedway, his first-ever victory in Kentucky. The driver of a MasterSbilt Race Cars house cars led four MasterSbilts in the top seven spots at Bardstown. "MasterSbilt, I've never doubted 'em," Cook said of Keith and Tader Masters of Crothersville, Ind. "I've always said if they wanted to, they could do it, because the proof's there. You go up there and look through their shop at the history from from Boggs and Moyer and Freddy Smith and Bloomquist — they've had everybody in their cars at some point. When those guys apply their selves like they have this year, they can do it. It took some people leaving, I think, to sort of wake 'em up, and they've built a great car." — From staff reports

WALL LEANS TOWARD FOLLOWING SERIES IN 2010: Former Mississippi State Championship Challenge champ Chris Wall of Holden, La., has been considering a run on the Lucas Oil Series for 2010, and his second-place finish Saturday at Bluegrass Speedway only encouraged him. "I'd say judging by runs like tonight, ya'll might be seeing more of the Gator Man," the alligator farmer told fans in a frontstretch interview. "We're pretty committed to it. I think we're going to be eligible to run the rookie deal," Wall said later in an interview. "So we wanted to set out and run a few of their tracks. This was an open date for us. We're just trying to get our feet wet and see if we can stack up." — From staff reports