Babb back in winning form on Outlaw tour 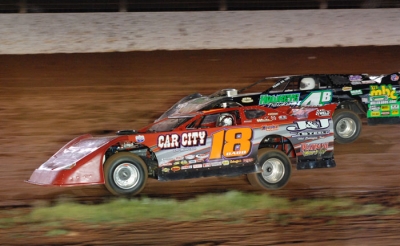 CONCORD, N.C. (Oct. 10) — Down deep, Shannon Babb felt like the Dirt Track @ Lowe's Motor Speedway might've owed him one. "We've had pretty good runs before, but we just never had won one," Babb said of the 4/10-mile oval in the shadow of one of NASCAR's premier venues. "It seemed like we always take off real good, and toward the end of the race somebody's always better than us or something." | Slideshow

No one was better than the Moweaqua, Ill., driver at the Jani-King Southern Showdown as he pocketed $18,000 for his fifth victory of the season on the World of Outlaws Late Model Series. Sticking with the safer low groove most of the race, Babb avoided a variety of collisions that eliminated top contenders for his first WoO victory since June 2.

"This time my car was a little bit more consistent," Babb said. "I think we've learned a few things over the last couple of times here."

Regaining the lead when Josh Richards fell out on the 13th lap, Babb led the rest of the rough-and-tumble 50-lapper, a race where just a dozen of 28 starters were running at the finish.

Polesitter Mike Balzano of Parkersburg, W.Va., who spun because of a flattened left-rear tire on the eighth lap, rallied to finish second with a last-lap pass of 28th-starting Darrell Lanigan of Union, Ky., who had loaded up his car earlier in the night before getting an 11th-hour notice he was a provisional starter. Another provisional starter, Steve Francis, picked up key positions late in the race to finish fourth ahead of Tim McCreadie and Rick Eckert, yet another provisional.

For virtually every driver except Babb, it was an up-and-down race as drivers got caught up in wrecks, rallied back into contention or dodged trouble.

"A typical Charlotte race," said Balzano, who briefly considered loading up his car before making a lap-eight tire change. "You never know what's going to happen."

Former Lowe's winner Jackie Boggs started outside the front row and jumped into the early lead while a turn-two scramble on the first lap sent Tim Dohm crossways, triggering an accident that eliminated Steve Shaver and Scott Bloomquist, winner of April's Colossal 100 at Lowe's.

Boggs was on top the first eight laps before Babb jumped ahead on a restart. The Illinois driver's first stint up front, however, lasted a single lap as 19-year-old Josh Richards of Shinnston, W.Va., exploded from sixth-to-second on one restart, then blew past Babb on the ensuing restart to grab the point while running the trickier high groove. "Josh drove by me like I was on jackstands," Babb said. "He was gone."

But the high groove, littered with dirt clods and a fluffy cushion, proved to be Richards' undoing on lap 13 when his fender got caught up under his right-front tire exiting turn two. "The bumper just got into the cushion and folded up underneath the tire," Richards said, "and you just couldn't steer or nothing."

Babb was out front for the next restart, but the green didn't stay out long. Brady Smith clipped Boggs in turn one, setting off a track-blocking pileup between turns one and two that involved more than half the cars still in action. Earl Pearson Jr.'s machine was partially perched atop Chuck Harper's with Rick Eckert, Chris Madden, Tim McCreadie and Eric Jacobsen also caught up in the mess.

That shuffled the field, moving up several cars in the back — including the tail-starting Lanigan — into contention as Babb led Boggs, Shirley, Jimmy Owens, Lanigan, Tim Dohm and Balzano back to the green flag.

"You hate to see that," said Balzano, who had pitted just five laps earlier, "but it's easier to pass 'em like that."

The longest stretch of green-flag racing followed as Babb built a lead of more than a straightaway on Lanigan by lap 25 with Balzano, Shirley and Jacobsen in futile pursuit. Babb appeared to have the race all but wrapped up with 15 laps remaining, but difficulties in trying to lap Owens and Smith allowed Lanigan to cut the lead in half.

"They don't know you're there and they're bouncing and I'm bouncing, and if you bounce together or something, it can get really crazy," Babb said. "But we survived."

Babb was fortunate to survive a turn-four skirmish on lap 45 involving a fading Shirley that brought out the final caution. The leader slipped just underneath the trouble and faced a five-lap shootout with Lanigan and Balzano licking their chops.

"I didn't really feel like I was running the best line, but I was just staying as low as I could," Babb said. "I didn't know where Darrell was, but I knew he was really tough, and it was just kind of a nightmare thinking if an axle was going to break, or a driveshaft, or what was going to happen. It's hard to run the same line that many laps in a row going across those holes."

But Babb executed perfectly in his low groove over the final five laps while Balzano edged Lanigan at the finish for the second spot. "We were running pretty good laps there at the end. We just ran out of time," Lanigan said. "Then that last lap I hit that rut trying too hard, and gave it up to Balzano."

Babb was glad to tell the crowd about his victory from just in front of the main grandstands following the race. "The track was super racy and there was a ton of good cars out there tonight," he said. "We drove all night to get here and had thoughts about not coming for a little bit, but I sure am glad we did."

Babb's Rayburn Race Car is sponsored by Car City and J&J Steel. ... Babb's winnings included $10,000 in purse money and an $8,000 for winning from the eighth starting spot. ... Richards started in the third row of his consolation race but blasted into the lead halfway through the first lap and won by nearly a half lap over NASCAR's Ryan Newman. ... With Richards earning a transfer spot, that gave Rick Eckert a provisional starting spot. Eckert and Steve Francis are the only two drivers to compete in every WoO feature since the series was revived in 2004. ... Ricky Weeks scratched from his consolation race after running just a few laps in the heat race.