McCreadie back on dirt for Charlotte WoO event 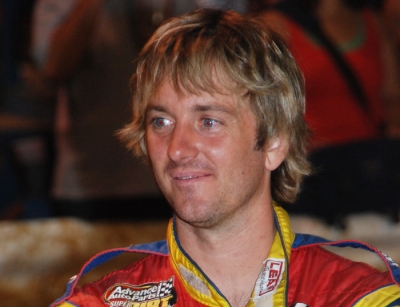 Hot off his first career stock-car start on the imposing high banks of Talladega Superspeedway, Tim McCreadie will return to the World of Outlaws Late Model Series on Wednesday to compete in the Oct. 10 event at the Dirt Track @ Lowe’s Motor Speedway.

The 2006 WoO champion-turned-Richard Childress Racing Development Driver will be behind the wheel of his familiar Sweeteners Plus No. 39 Dirt Late Model for the Jani-King Southern Showdown Presented by Ferris Commercial Mowers, which kicks off Bank of America 500 Week at Lowe’s Motor Speedway.

“I’m excited to get back in the Late Model,” said McCreadie, whose development deal with RCR this season has seen him enter NASCAR Busch Series, Busch East Series, West Series and ARCA RE/MAX Series events. “It’s been hard for me to plan any Late Model shows in advance this year, but my schedule is free this week so I’m ready to go.”

McCreadie, 33, of Watertown, N.Y., will be in action just five days after making his debut at Talladega in Friday’s ARCA RE/MAX Series 250. After advancing from the 23rd starting spot to run as high as second, he finished on the lead lap in 15th place.

“It was an awesome experience,” McCreadie said of racing at Talladega. “You’re definitely nervous when you first go out there because it defies logic that you can go wide open around the place. To me it looked like turn three was a 90-degree turn and there was no way you could go in there wide-open, but you get used to it and then it’s like driving on the highway when you’re by yourself.”

Following his Talladega appearance, McCreadie, who has been spending most of his time this year living in a rented home outside Winston-Salem, N.C., flew home and spent the remainder of the weekend at the New York State Fairgrounds in Syracuse, where Super DIRT Week was being held on the famed one-mile oval. McCreadie couldn’t jump in a DIRTcar big-block Modified because time trials and heat races had already been run for the Rite Aid 200, but he visited with friends and served as a radio spotter during Sunday’s big race for big-block Modified regular Justin Haers of Phelps, N.Y. He also reveled in the $50,000-plus Rite Aid 200 victory of his Sweeteners Plus Racing teammate Vic Coffey, joining in the team’s postrace celebration.

McCreadie’s short trip home also allowed him to attend the classic Monday Night Football game in Buffalo, where he watched his beloved Buffalo Bills fall in heartbreaking fashion to the Dallas Cowboys.

Hoarse and tired from cheering on the Bills, McCreadie was hard at work on Tuesday at the Sweeteners Plus Racing shop in Avon, N.Y., to prepare his Rocket Chassis for duty at Lowe's. The car was in need of an overhaul since he last ran it on Aug. 11 in the North-South 100 at Florence Speedway in Union, Ky., and he also had to restock the team’s hauler with dirt Late Model equipment and tires because Coffey had used it at Syracuse.

“It’ll be cool to work with Tommy again,” said McCreadie. “I still see him all the time at RCR (Bowyer’s dirt Late Model is housed there), and a few weeks ago I went with him to West Virginia (Motor Speedway) when I ran Austin’s car (Austin Dillon, the teenage grandson of Childress running a dirt Late Model as part of the RCR Driver Development Program).”

There is a possibility that McCreadie will also enter this weekend’s (Oct. 12-13) WoO LMS ‘Tennessee Fall Brawl 100’ at Volunteer Speedway in Bulls Gap, Tenn., but he can’t commit to the event because he is scheduled to sign autographs on Friday morning during RCR’s Fan Appreciation Day at the team’s campus in Welcome, N.C.

Thus McCreadie’s primary focus is on Wednesday night’s 50-lap A-Main at The Dirt Track, a four-tenths-mile oval that is one of his favorite speedways. “I enjoy racing at Charlotte,” said McCreadie, who finished fourth earlier this year in the Circle K Colossal 100. “I’ve tried to run every big show they’ve had there.

"It’s definitely a tough track, but I enjoy the atmosphere and racing in front of a big crowd. It’s always cool to be part of a show there, and you can win some big money in (the Jani-King Southern Showdown) if you start in the back and pass cars.”

The Jani-King Southern Showdown offers a base first prize of $10,000, but the winner can potentially pocket as much as $28,000. The top three finishers in each of the six heat races will advance directly to the main event and then draw for starting positions; if the driver who wins the 50-lap finale submitted an official entry form prior to Sept. 15, he will receive the $10,000 first-place prize along with an amount equal to $1,000 multiplied by his starting position.

Date: Oct. 10, hot laps scheduled for 6:45 p.m.
Location: The Dirt Track @ Lowe’s Motor Speedway in Concord, N.C.
Purse: $10,000 to the winner with potential bonuses up to $18,000 (The top three finishers in each heat will redraw for starting positions; if the winner entered the race prior to Sept. 15, he'll receive a bonus of $1,000 multiplied by his starting position)
Format: Instead of using the usual World of Outlaws Late Model Series format, drivers will draw for heat race starting positions. WoO competitors will all receive equal show-up points.
Who's hot: Shane Clanton of Locust Grove, Ga., the fourth-place driver in WoO standings. He spent the past two weekends winning the $25,007-to-win Magnolia State 100 at Columbus (Miss.) Speedway and the $5,000-to-win O'Reilly Southern All Star event at Talladega (Ala.) Short Track.
Star power: NASCAR Nextel Cup standouts Clint Bowyer and Ryan Newman are expected to race. Bowyer will drive his own Jack Daniel’s-sponsored No. 07 Late Model and Newman will steer a Rocket No. 39 from the stable of WoO points leader Steve Francis.