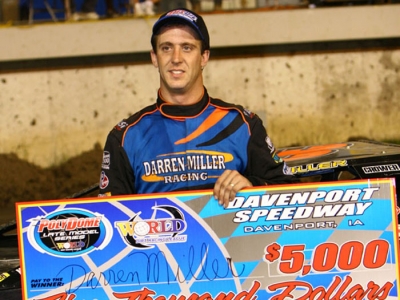 By lap four, Miller had taken the lead, and he was able to work through lapped traffic while holding Kaanta and Justin Fegers at bay. As lapped traffic became thicker, Kaanta was able to close in on Miller. But a yellow flag would fly again, giving Miller a clean racetrack to work with on the restart.

"That late yellow helped us out a lot," Miller said in victory lane. "After the dash, I had my guys change just about everything, and they thought I was crazy."

Kaanta, who had set fast time and started fifth in the 50-lapper, worked hard to cut his way up to second, but he could not overtake Miller for the win.

Ray Guss Jr., substituting again for the injured Brian Harris in the No. 21H, finished third despite tangling with another car in the race, causing some damage.

"I got into someone, and it messed something up with the right front," Guss said. "I didn't see a car down low, and when I tried to get out of the way, I ended up making contract with another car."

Birkhofer had a flat tire early in the race but marched his way back to the front for a fourth-place finish.

Fegers, of Mound, Minn., became the 2007 WDRL champion simply by taking the green flag in the series finale. Miller held off Kaanta, the WDRL's rookie of the year, to win the championship. Fegers and the rest of the top 10 will be honored at a Nov. 10 banquet. Banquet details will be announced.

Jimmy Mars, Ray Guss Jr. and Justin Fegers won heat races. ... Fegers won the dash and Jeremy Grady won the consolation. ... Andrew McKay got the hard luck award after flipping in an accident that also involved Jeremy Grady and Jason Rauen. None of the three were injured.