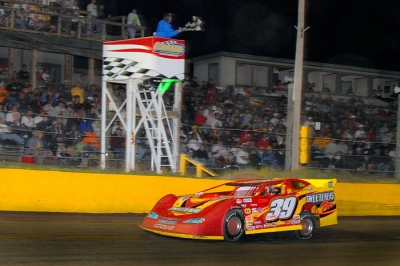 NEW RICHMOND, Wis. (July 31) — The 22nd annual USA Nationals is Wisconsin's richest Dirt Late Model race, but the Badger State definitely has a little New York flavor for the $50,000-to-win event. Tim McCreadie and Tim Fuller, both of Watertown, N.Y., are scheduled to start on the front row of Saturday's unsanctioned event after running 1-2 in Friday's pole dash at the 3/8-mile oval. | Slideshow

McCreadie ran uncontested over Fuller in the six-lap dash among heat winners to earn the pole position for the 100-lap main event. Four Upper Midwest drivers rounded out the remaining finishers in the six-car dash with Brady Smith of Solon Springs, Wis., third ahead of Justin Fegers of Mound, Minn., Terry Casey of New London, Wis., and Adam Hensel of Barron, Wis.

They'll start in the first three rows of the 25-car field that will also include former race winners Brian Birkhofer of Muscatine, Iowa, Rick Aukland of Zanesville, Ohio, and Jimmy Mars of Elk Mound, Wis., who rallied from eighth to second in his heat race.

In an anticlimactic race among heat winners, polesitter Tim McCreadie won the pole dash to set up up another all-New York front row at Cedar Lake. McCreadie and Tim Fuller, Thursday night's WDRL feature winner, also started on the front row for that race. Brady Smith was second followed by Justin Fegers and home-state drivers Terry Casey and Adam Hensel. McCreadie cut his winner's interview short, hoping that 40-lap NASCAR Late Model feature could be completed "and we can go have some fun," he said. Moments later, rain began to fall and the track announced the feature would be held Saturday.

Polesitter Brady Smith fought off an early challenge from overall fast qualifier Jason Feger and raced to a victory in the final heat race. Feger lost the second spot to fifth-starting Josh McGuire when he got too high exiting turn two on an early restart, and he couldn't fight his way back past McGuire in tight racing the rest of the way. Feger got the final transfer spot while sixth-starting Scott James was fourth, fading late behind the McGuire-Feger battle. Jeremy Payne was battling for fourth on the third lap when he spun in turn two to draw the race's lone caution; Payne ended up sixth.

Thursday night's WDRL feature winner Tim Fuller rocketed into the lead from outside the front row and cruised to victory. Polesitter Nick Anvelink stumbled a bit on the first lap but recovered to hold the second spot, fighting off challenges throughout the second half of the race from third-starting Shannon Babb. Babb got third after an early battle with Ashley Anderson for the final transfer spot. The race ran caution-free.

In a race with some strange twists, polesitter Adam Hensel, running third most of the race, found himself out front for a lap-10 restart and raced to a victory in the 15-lapper. Wendell Wallace, who started 10th, rallied for a second-place finish with Dustin Hapka finishing third to earn his first career USA Nationals start. Wallace and Hapka were unlikely transferring cars until the last five laps. Zach Johnson led the first eight laps, losing the lead to Matt Miller. But less than two laps after Miller took command, Johnson spun alone in turn two and Miller slid over the turn-four cushion then pitted under yellow with a flat tire. That handed the lead to Hensel, who went on to the victory despite a lap-13 caution for debris when Dan Shelliam lost right-front bodywork from his blue No. 16. Miller got back to fourth or fifth — it was close at the line between him and Dan Shelliam. Third-starting Russ Scheffler, the third fastest overall qualifier, fell from contention when he spun into the turn-two infield on the fourth lap.

Polesitter Terry Casey's comfortable lead in the early laps disappeared quickly, but he was able to fight off challenges from third-starting Clint Smith for the victory. Smith had his hands full at different times with Wall, Billy Moyer and eighth-starting Jimmy Mars, who put on a late charge and took second from Smith by a few feet at the checkered flag. Smith got the third and final transfer while Moyer and Wall, who ran as high as second but fell back after losing a spot to Moyer's inside move entering turn three, were on the outside looking in. Two cautions slowed the action. Bill Koons spun exiting turn two on the sixth lap to draw the first caution of the heat races, and Alan Mondus stopped on the ninth lap for a second yellow. Brian Shirley, whose time trial was disqualified because he failed to report to he scales, started on the tail and finished sixth.

Polesitter Tim McCreadie outran third-starting Brian Birkhofer to win the second heat while outside front-row starter Chad Simpson ran third all the way. Terry Phillips, who started fifth, ran fourth and was the only other driver with a real chance at a top-three transfer spot as the frontrunning cars quickly pulled away from the field. McCreadie led Birkhofer by a few lengths early, then pulled out to a half-straightaway lead by the 10th lap. Tail-starting Chris Madden rallied to finish sixth.

Outside front-row starter Justin Fegers slipped by polesitter Rick Aukland early and dominated the first heat, building a straightaway advantage halfway through the 15-lapper and cruising the rest of the way. Several drivers were bottled up on the backstretch of the first lap, shuffling the top five cars. Aukland held on to second most of the way while sixth-starting Jeep Van Wormer, who slid back after challenging on the first lap, rallied to take third from Al Purkey in the final two laps for the third and final transfer spot. Dennis Erb Jr. also overtook Purkey but couldn't gain on Van Wormer.

Feger blazed to a lap of 13.922 seconds on the 3/8-mile oval to top 63 qualifiers for one of Dirt Late Model racing's richest unsanctioned events. Feger earned $1000 from R2C Performance for his fast time, $500 as a bonus and an additional $500 for using an R2C filter.

"It's a good way to start the night," said Feger, who finished ninth in Thursday's WDRL feature at Cedar Lake.

First qualifier John Anderson got too high in turn three on his first qualifying lap, then slowed on the frontstretch when crossing the line for his second lap, leaving him with a subpar 16.775-second lap. .... Dave Eckrich was also off the pace as his car popped with mechanical problems during his time trial laps. ... Jimmy Mars, won of the last 10 qualifiers, slipped over the turn-four banking and brushed the wall on his first lap. That flattened a tire and left him without a qualifying time. The track allowed him to return as the final qualifier for his second lap. ... Chris Madden also jumped the cushion twice, knocking him out of a chance for a decent time. ... Most of the fastest qualifiers came from the first half of the time trial session as it became increasingly more difficult to turn quick laps later in the time trial session. One of the best latest qualifiers was 56th qualifier Justin Fegers of Mound, Minn., who was 13th fastest. ... The top 18 qualifiers for the USA Nationals are inverted for six heat races, meaning the top six fastest qualifiers start inside the second row. ... The top three finishers from each 15-lap heat are locked into the main event with the six heat winners running a dash to determine the first three rows of the feature. The starting positions for the dash will be drawn. ... On Saturday, six cars will transfer from consolation races, and the winner of a last-chance race will tag the 25-car field. ... Chief among Friday's newcoming drivers who didn't compete in Thursday's WDRL action (a race won by Tim Fuller of Watertown, N.Y.) is two-time Dirt Track World Champion Shannon Babb. ... Several drivers are competing in both Super Late Model and NASCAR Late Model competition. There are 41 NASCAR Late Models. ... The track qualifying record at Cedar Lake is 13.345 seconds set by Earl Pearson Jr. of Jacksonville, Fla., on Aug. 4, 2006. .... Lee Thomason of Marion, Ill., a sponsor for driver Dennis Erb Jr. of Carpentersville, Ill., piloted an Erb backup car. ... Long-time USA Nationals competitor Larry Stockwell of Ellsworth, Wis., was back on the track for the first time in two years. ... Fast qualifier Jason Feger and nine other drivers were offered $1,000 tow money by the FANS fund to compete at Cedar Lake, a fan-backed effort to draw more talent to the Upper Midwest's richest Dirt Late Model event. ... Rain may move into the area by 9:30 p.m. or so; it appears the track plans to continue racing as schedule and complete the action after any potential rain delays.