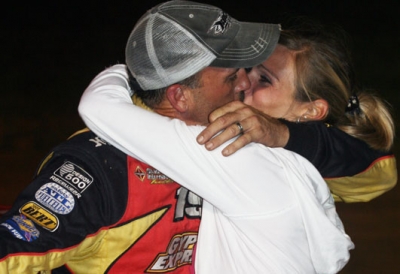 Tim Fuller got a kiss from wife Lori at Sharon. (Todd Battin)

Tim Fuller's convincing victory in Saturday night's Buckeye Bash at Sharon Speedway in Hartford, Ohio, meant more to him than the end of his year-long, 46-race winless streak on the World of Outlaws Late Model Series. It happened to mark the first time that his wife Lori and 4-year-old daughter Ainsley had an opportunity to celebrate a Dirt Late Model triumph with him.

The five previous wins in Fuller's three years as a steady Dirt Late Model driver — including the three career WoO victories he captured over the two seasons in the far-off locales of North Dakota and Wyoming—– came with no family members in attendance. But both of his girls were at Sharon and met him in victory lane.

“They've been there when I won (big-block) modified races, but they never saw me win a Late Model show,” Fuller said. “It feels great to finally win one of these things with them here. Now I don't have to just tell them about it.”

Fuller, whose $10,600 victory came less than one week after he pocketed $6,000 for finishing second in the inaugural DIRTcar Racing All-Star 100 for big-block modifieds on July 19 at Cayuga County Fair Speedway in Weedsport, N.Y., started off Ohio Speedweek with an eventful outing the previous night at Attica (Ohio) Raceway Park. He used a provisional to start 24th at Attica after relinquishing the lead on the final lap of the first consolation race because his car's starter broke bolt off and caused a vibration that busted the driveshaft. Quick work by his crew got him to the starting line with the same machine and he planted it in the outside groove to charge forward for a satisfying seventh-place finish.

Shaver then hugged his 8-year-boy Dylan, who said to his dear old dad, “Nice present!”

“He asked me if I was gonna win for him tonight because it was his birthday,” Shaver said of his son. “I told him I was gonna do my best. I'm glad I was able to get it done for him.”

Buoyed by his strong run at Attica, Shaver was itching to continue on the Ohio Speedweek trail to Saturday night's stop at Sharon. But the 45-year-old had to bypass the event because he was committed to attending his high school reunion in West Virginia.

World of Outlaws veteran Clint Smith proved he's a class act during Saturday night's show at Sharon. Despite experiencing a frustrating evening that saw him plagued by a sour-running motor, Smith didn't flinch when Iowa's Jill George approached him just minutes before the start of the feature and asked if she could take the green flag in his backup car.

Smith had his chief mechanic, Darrell Cooper, hastily pull out the second machine for George, who was scheduled to start 24th in the 50-lapper (track officials decided to put all 26 entered cars in the race) but was without a ride after her car was sidelined by terminal mechanical trouble during heat action.

“I can't thank Clint enough for letting me start the race in his car,” said George, who became the first female to qualify for a WoO feature through a heat race on July 16 at Dakota State Fair Speedway in Huron, S.D. “When I walked over to him he put his arm around me and said, ‘What can I do for you?' I asked him if I could take his backup car out for a lap and he just said, ‘Sure.' ”

“She needed some help,” Smith said of George. “I've needed help before, so I helped her out.”

George was credited with a 26th-place finish, while Smith struggled to a 16th-place run.

Darrell Lanigan was so focused on trying to win Sharon Speedway's feature that it took him a while to realize that he had a problem with his left hand. “A rock came up off the track and hit my (middle) finger about lap 10,” said Lanigan, the defending WoO LMS champion. “I didn't realize my finger was bleeding until I started feeling some blood on the steering wheel.”

Lanigan, who was not wearing driving gloves, ran the remainder of the distance with his finger bleeding from a cut. He held his bloodied hand out the window of his car during a caution period to show his crew that he had been injured; later, after Lanigan climbed out of the machine following a second-place finish, blood was visible splattered throughout his cockpit (and a chunk of his car's rock-guard was missing where it was hit by the rock).

“It's OK,” Lanigan said of his finger, which he wrapped with a bandage in his hauler after the race. “It's no big deal.”

Lanigan had another interesting experience at Sharon. When the race's first caution flag flew, on lap 29, he was running second but mistakenly thought he was in the lead. He had to be directed during the caution period to catch up to the pace car and leader Fuller, who had been ahead by nearly a half-lap.

“I saw a 19 (Fuller) up on the scoreboard as the leader, but I had just passed a 19 (Steve Francis) and I thought that maybe they hadn't changed the board yet,” Lanigan said. “Fuller was so far ahead I couldn't even see him.”

Following an Ohio Speedweek that saw two races completed (Attica and Sharon) and two shows postponed by rain during qualifying (Thursday's show at Muskingum County Speedway in Zanesville, Ohio, was rescheduled for Aug. 20 and Sunday's program at Eriez Speedway in Hammett, Pa., was reset for Aug. 23), the battle for the WoO points lead is nearly a three-way dead heat.

Josh Richards (fourth at Attica, fifth at Sharon) headed into the tour's two-and-a-half-week break leading the standings by a mere two pointsï¿½ over both Lanigan (third at Attica, second at Sharon) and Steve Francis (second at Attica, third at Sharon), who are tied for second.

The place to be following Saturday night's show at Sharon was Russ King's hauler, where a big crowd of the WoO LMS Rookie of the Year contender's family and friends gathered to spend some rare time with their favorite long-distance traveler.

The 20-year-old King won his first career big-block modified feature in 2005 at Sharon, which sits less than a 20-minute drive from his family-owned team's shop in Bristolville, Ohio. Thus he had been anxiously awaiting the tour's stop at his home track after traipsing all over the country since February.

King wasn't satisfied with his performance, but his 14th-place finish did earn him the $250 bonus for being the event's highest-finishing WoO LMS rookie contender. He also extended his lead in the Rookie of the Year standings to 20 points over Jordan Bland of Campbellsville, Ky.

Joining King at Sharon were his father, Rex Sr., and younger brother Rex Jr., both of whom didn't expect to attend Saturday's show. King's father and sibling are big-block modified regulars and were scheduled to compete in a BRP Modified Tour event on Saturday night at Tyler County Speedway in Middlebourne, W.Va., but the card was canceled by rain early in the afternoon when they were just 20 minutes away from the track. Rex Sr. turned the King Bros. Racing hauler around and drove it straight to Sharon, pulling into the pit area shortly before hot laps began.

Brady Smith knows that if he just keeps knocking on the door to victory lane, he'll eventually break it down. But that doesn't make it any easier for the impressive first-year WoO regular from Solon Springs, Wis., to accept the fact that he remains winless on the 2009 tour.

He craves a win, and he's arguably been fast enough to capture two of the last three races, including Friday night's 50-lapper at Attica.

Coming off a crushing disappointment in the Wild West Tour finale on July 16 at Dakota State Fair Speedway (Smith was making a stirring outside charge to the front when contact with Tim Fuller forced him to pit with a left-rear flat as he ran third with 11 laps remaining), the talented Outlaw newcomer made another exciting come-from-behind bid for victory at Attica. He advanced from the 17th starting spot to a fifth-place finish; he thought he could've pulled off a win “if the race was 10 more laps.”

Smith conceded that his car wasn't fast enough to win on Saturday at Sharon, but he was headed to a probable fourth-place finish when its rear end broke with eight laps remaining. He was in line for his 12th top-five of the season — a number exceeded by only the top-three drivers in the points standings.

Chub Frank entered Ohio Speedweek coming off his first win in over a year, an O'Reilly All Star Series event on July 18 at Lawrenceburg (Ind.) Speedway, but the momentum didn't help him at Attica or Sharon. He had to use a provisional at Attica, finishing 13th, and finished a quiet 11th at Sharon. .... Gregg Satterlee of Rochester Mills, Pa., drew attention at Attica and Sharon. While he didn't lead any laps after starting both race from the pole position, he finished a respectable eighth at Attica and ran second at Sharon until his car's handling became hampered by a broken nosepiece brace that finally forced him to pit for repairs on lap 36. “I think we're getting closer," the 24-year-old Satterlee said. "Running these Outlaw races is helping us.” ... Sunday's rainout at Eriez Speedway came after unusual weather. The track dodged waves of thunderstorms, but with just two cars left to time-trial a cloudburst soaked the track and ultimately led to the event's postponement. Bizarrely, the sun shined through most of it, creating a brilliant rainbow that at one point appeared to arc from the pit area to the middle of the infield. ... Next up for WoO competitors is a three-race swing in the Northeast from Aug. 13-15. Grandview Speedway in Bechtelsville, Pa., leads off the tripleheader with its first-ever tour event on Thursday followed by stops on Friday at Bedford (Pa.) Speedway and Saturday at Hagerstown (Md.) Speedway.