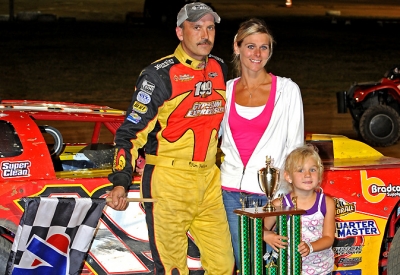 HARTFORD, Ohio (July 25 ) — Everything finally fell into place for Tim Fuller on Saturday night at Sharon Speedway. Ending a year-long victory drought on the World of Outlaws Late Model Series, the 41-year-old driver from Watertown, N.Y., flexed some serious muscle in dominating the 50-lap WFMJ-TV Buckeye Bash that served as the second stop of Ohio Speedweek. | Slideshow

Fuller surged off outside the front row to grab the lead from polesitter Gregg Satterlee of Rochester Mills, Pa., at the initial green flag and never looked back. He led by as much as a half-lap before three caution flags during the race's second half forced him to hold off defending WoO champion Darrell Lanigan of Union, Ky., to secure the $10,600 payday.

“It's great to get this monkey off our back,” said Fuller, who snapped a 46-race WoO winless streak dating back to his last triumph, on July 16, 2008, at Gillette (Wyo.) Thunder Speedway. “We've been fast and maybe could've had a win three or four times this year, but the stars just didn't line up right in my favor.

“It was getting frustrating, but I said to (car owner) John Wight, ‘We're gonna hang around in this top five long enough and get a win.' When you're fast a win will eventually come, and we got one tonight.”

Fuller simply had no peer at the 3/8-mile oval co-owned by NASCAR veteran and former World of Outlaws Sprint Car Series champion Dave Blaney. The 2007 WoO Rookie of the Year wasn't even concerned when the race's first caution flag, on lap 29 for a flat left-rear tire on the car driven by rookie Jordan Bland of Campbellsville, Ky., wiped out his commanding advantage.

“Those cautions actually helped me,” said Fuller, who also dealt with restarts after yellow flags on lap 36 (for Satterlee's stopped car) and lap 42 (when Brady Smith of Solon Springs, Wis., relinquished fourth place due to a broken rear end). “I had on a softer right-rear (Hoosier) tire than most people, so I could fire better (after cautions).”

Lanigan, 39, got the nose of his Fusion Energy Rocket car up to the rear deck of Fuller's Gypsum Express Rocket several times entering turn one, but Fuller never flinched.

“There was one preferred groove and I didn't move out of that,” said Fuller, who became the 15th different winner in 27 WoO A-Mains this season. “Once I got in the lead I knew it was gonna be tough to pass me as long as I didn't have a tire problem.”

The victory was the fourth of Fuller's career on the WoO but first in his home time zone. His previous triumphs came in 2007 at River Cities Speedway in Grand Forks, N.D., and in 2008 at Gillette and North Dakota's Williston Basin Speedway.

Lanigan, who ran the same soft-compound tires as Fuller, reached second place on lap 27 when he passed Satterlee. But he couldn't overtake Fuller, leaving him with his sixth runner-up finish of the 2009 WoO season.

“He had that momentum line running up front,” Lanigan said of Fuller. “I could get up close to him, but it was just too hard to clear him.”

Lanigan ran virtually the entire distance with blood flowing from the middle finger on his left hand after it was struck by a rock that entered his cockpit. Lanigan, who was not wearing gloves, wrapped his finger in gauze following the race.

Francis, 41, saw his streak of three consecutive runner-up finishes come to an end when he drove his Beitler Motorsports Rocket under the checkered flag about one second behind Lanigan. He took third on lap 30 from a fading Satterlee, who pitted six laps later to repair a broken nosepiece brace that was getting into his tire.

“We went a little harder on our right-rear tire and I think that was our problem,” said Francis, who started fifth. “But I don't know if we would've had anything for Fuller. His car was good all night and he was due.”

McCreadie, 35, and Richards, 21, were also hampered by their tire choices, leaving them fourth and fifth, respectively, at the finish. McCreadie, who started third, said his Sweeteners Plus Rocket was shod with a right-rear tire that was too hard and a left-rear that was too soft, while the sixth-starting Richards was too hard with his rubber selection.

Boom Briggs of Bear Lake, Pa., finished a WoO career-best sixth to earn the $500 Bonus Bucks cash that goes to the highest-finishing driver who has never won a tour A-Main and isn't ranked among the top 12 in the series points standings. He secured the extra cash when he grabbed sixth on lap 45 from Matt Lux of Franklin, Pa., who was also eligible for the money.

Notes: Russ King, 20, of Bristolville, Ohio, whose shop is less than 20 minutes from Sharon, finished 14th to grab the $250 bonus as the highest-finishing WoO Rookie of the Year contender. ... A 26-car field was signed in for the event, which was run under a threat of rain. Forecasts called for as much as an 80 percent chance of thunderstorms in the area from noon to midnight, but the only significant precipitation was a short burst of rain that slickened the track surface with four laps completed in the third heat race. The prelim restarted after a 34-minute delay and the night's final checkered flag flew shortly before 9:15 p.m. ... Donnie Moran was penalized to the rear of the field for the start for reporting late to the pre-race lineup staging on the racetrack, and Jill George fell to the rear because she started the feature in Clint Smith's backup car. ... Ohio Speedweek concludes Sunday with a 50-lap, $10,000-to-win event at Eriez Speedway in Hammett, Pa.