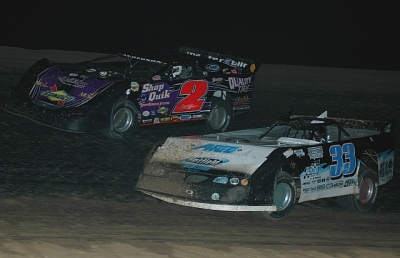 MAYETTA, Kan. (Oct. 5-6) — John Anderson of Omaha, Neb., is having the kind of season he hopes never ends. Continuing a year in which he's visited victory lane for several sanctioning bodies, Anderson completed his weekend sweep of the O'Reilly Topless Outlaw Racing Association with a victory at Thunderhill Speedway. | Friday slideshow | Saturday slideshow

The night following his victory in the Thunderhill weekend opener, Anderson started on the pole position. Al Purkey of Coffeyville, Okla., got the jump on Anderson at the outset, but Anderson regained the advantage with an outside move down the backstretch with just a handful of laps remaining.

The $3,000 victory boosted his weekend earnings to nearly $5,000 for the weekend as TORA wrapped up its season.