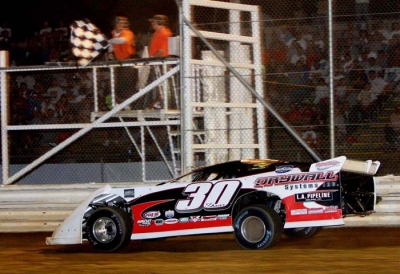 Shaver, 45, worked hard for his money, holding off a battling group of WoO standouts throughout the distance to record his coveted first career win on the national tour — and provide son Dylan a memorable eighth birthday present.

Josh Richards of Shinnston, W.Va., Darrell Lanigan of Union, Ky., and Steve Francis of Ashland, Ky. — the top three drivers in WoO points — all got close to the lead, but Shaver never wavered during the frenetic race around the high-banked third-mile oval.

“I was looking down to my left and could see them on entry (to the turns),” Shaver said. “But I never saw ‘em off (the corners), so I figured I didn't have to change my line. I was running kind of a unique line of my own and I had plenty of momentum as long as I didn't catch lapped traffic at the wrong time.”

Shaver calmly disposed of two potentially dangerous slower machines rounding turns one and two on the final lap, giving him a cushion he carried to the finish line. He drove under the checkered flag 0.741 of a second ahead of Francis, who slipped by Lanigan heading down the backstretch on the last circuit to register his third consecutive runner-up finish on the series.

Lanigan settled for third, followed by Richards, who won last year's inaugural WoO event at Attica, and Brady Smith of Solon Springs, Wis., who started 17th and was charging around the outside of the track during the race's closing stages. Smith momentarily moved ahead of Richards for fourth but fell back to fifth on the final lap when his Bloomquist Race Car got boxed in behind a lapped car.

Shaver, who started second, outgunned polesitter Gregg Satterlee of Rochester Mills, Pa., for the lead at the initial green flag and never looked back. He credited his savvy tire choice for keeping him at the front of the pack.

“We had harder tires on than most of those guys,” said Shaver, who became the 14th different winner in 26 WoO events. “I was leaning toward a hard tire before the race because I knew I wanted to run my right-rear in the black (groove), but it was my crew chief, Casey Marshall (the winner of the Integra Shocks Wrench of the Race Award), who thought we should run a 1400 (Hoosier compound). The tire worked perfect for us. I had plenty of traction the whole race.”

An entrant in select WoO events since 2004, Shaver finished second to Francis in the tour's stop on May 31 at Tyler County Speedway in Middlebourne, W.Va. He was thrilled to finally break through to join the list of winners on the series.

“It means a lot just to be able to contend with (the Outlaws), let alone beat them,” said Shaver, whose earnings included the $500 WoO Bonus Bucks cash for being the highest-finishing driver who had never won a tour event and wasn't ranked among the top 12 in the series points standings. “It's a great feeling to win one of these races.”

Shaver's triumph overshadowed the titanic tussle for second place between the tour's top title contenders. Lanigan (fifth starting spot), Francis (ninth) and Richards (10th) found themselves running 2-4 by lap 24, and, with the event going caution-free from lap 20 to the finish, they engaged in a thrilling display of non-stop competition for second place.

At times racing three-wide a few car lengths behind Shaver, the trio of Rocket chassis campaigners kept the big Attica crowd buzzing. Lanigan managed to secure second from Richards on lap 33, but he couldn't find the speed to pull even with Shaver and ultimately lost the position to Francis on the final lap.

Francis, 41, was able to close the gap on Shaver rolling through turns three and four for the last time, leaving him wishing for a slightly longer race.

“My car was exceptional,” Francis said of his Beitler Motorsports mount. “But Josh and Darrell were racing side-by-side in front of me and it just took me too long to find a way by them. I zigged and zagged, but I just couldn't get by them until it was too late.”

Rick Eckert of York, Pa., who started 13th, finished sixth after Brady Smith knocked him from the top five on lap 44. Tim Fuller of Watertown, N.Y., who used a provisional to start 24th after breaking a starter bolt and driveshaft while leading on the final lap of the first consolation race, charged forward to salvage a seventh-place finish. Satterlee, Eddie Carrier Jr. of Salt Rock, W.Va., and top-rookie finisher Jordan Bland of Campbellsville, Ky., completed the top 10.

Notes: Shaver's Rocket Chassis is sponsored by Drywall Systems Inc. and L.A. Pipeline. ... Fifty-four cars were entered in the evening's action, the fourth-largest field of 2009. ... Jeep Van Wormer (scheduled to start fourth) and Doug Drown (eighth) were penalized to starting spots at the rear of the field for reporting late to the prerace lineup. ... Fast qualifier Tim Dohm of Cross Lanes, W.Va., was the first retiree, pulling to the infield with mechanical trouble on lap four. ... Among drivers failing to make the feature: Steve Casebolt, Brian Ruhlman, Wayne Maffett Jr., Curtis Deisenroth, Ryan Markham, Boom Briggs and Tyler Reddick. ... Ohio Speedweek continues on Saturday at Sharon Speedway in Hartford, Ohio, and Sunday at Eriez Speedway in Hammett, Pa.