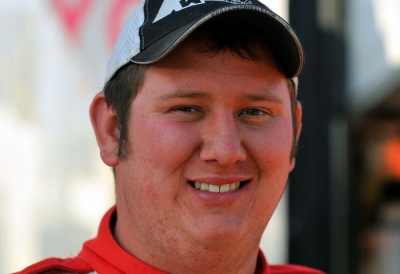 Russ King will be like a college student home for the weekend from his far-off place of higher learning when he visits Sharon Speedway on Saturday. Only in this case, King will bring his classmates and mentors along with him. And he won't be hanging out and having fun, but rather continuing his "education."

King, 20, of Bristolville, Ohio, is set to return to his home track as the Rookie of the Year points leader with the World of Outlaws Late Model Series invades the 3/8-mile Sharon oval for the sixth consecutive year July 25. The third stop of the four-race Ohio Speedweek will be headlined by the 50-lap WFMJ-TV Buckeye Bash paying $10,000 to win.

A regular on the grueling series this season driving family-owned equipment, King is anxious to run a rare event at a track he knows well. Sharon Speedway is less than a 20-minute drive from his shop and also happens to be the site of his first-ever feature win, in 2005 when he was a teenage big-block modified racer.

“I'm excited about Sharon because I grew up going to races there and I like racing there,” said King, whose father, Rex King Sr., is a former big-block modified champion at the track. “Most of all, it's close to home and so many people I know are going to be there – my grandpa and grandma, relatives, friends, people who work at the mill (his family's King Bros. Ready-Mix Concrete).

“Everybody around home has only heard second-hand about what we've been doing all year because we've been running so far away, so it's gonna be fun to race in front of them.”

King's supporters will get a chance to hear his stories from the WoO road during Saturday's program at Sharon, a track the burly youngster ran regularly in the big-block modified division from 2005-2007.

d as a rookie Outlaw, King certainly has plenty of stories to tell — though much to the competitive racer's dismay, he doesn't have a long list of memorable finishes to describe to his visitors at Sharon. As he said last week, “We'll have one good race, then we'll struggle for like five — just enough good runs to keep our morale up and keep us coming back.”

Through WoO 25 events in 17 states and two Canadian provinces, King has started 20 features and recorded a rookie-best four top-10 finishes, with a top finish of ninth, on July 10 at River Cities Speedway in Grand Forks, N.D. He sits 10th in the series points standings and leads the rookie points battle, which will be determined using drivers' best 30 finishes, by 57 points over Jordan Bland of Campbellsville, Ky., and 153 points over Brent Robinson of Smithfield, Va.

King would love to be putting up more impressive stats, but he understands that he's “running against the best drivers in the country” and thus this is his season of hard knocks. Rookies rarely jump onto the WoO and set the world on fire — especially a true dirt Late Model upstart like King, who made less than 20 starts in the division last year — so the first year on the trail is all about soaking up as much experience and knowledge as possible.

In that vein, King can consider his '09 campaign a success. He has developed a close relationship with WoO LMS veteran Chub Frank of Bear Lake, Pa., who got the King family started in Dirt Late Model racing last year by selling them two cars and a hauler, and he's found the rest of the traveling stars to be accommodating, too.

“One of the things that has maybe surprised me a little bit is that all the Outlaw guys are a lot nicer than you might think,” said King, who has two Rocket cars and three Custom engines at his disposal. “Anybody here in the pits will give you the shirt off their back if you need it. Being our first year, I didn't really expect people to treat us like that, but I'm pretty sure I could ask anybody for anything and they would give it to me.”

Being right in the mix with the nation's premier drivers has proven to be the biggest benefit of King's series assault.

“When you're out here racing with these guys, (technical) stuff's changing constantly,” said King. “Stuff that the locals might be doing now is stuff the traveling guys were doing in Florida in February. You can pick up (the new information) fast out here on the road because guys like (Mark) Richards (of Rocket Chassis) and them guys are coming up with it and you're out here with them.

“I think we're getting better,” he continued. “We were watching the (race) tapes on the way (to the recent Wild West Tour events), and seeing what I was doing early in the year to what I'm doing now, I think I'm more aggressive. I think we race around these guys a little harder because I'm more confident in myself that I'm not gonna roll into the corner and not run into them.”

It's definitely been a season that King will never forget. While taking the first step in what he hopes will be a full-time career as a Dirt Late Model driver, he's also seen places and things all across the country. King's mother, Sis, has been on the road with him — and doing the majority of the hauler driving — for most of the season, and she's made sure that Russell and his crew guys have experienced more than just the racetrack culture. In between races they've visited such sites as the U.S.S. Alabama battleship in Mobile, Ala.; the aquarium in Atlanta; NASCAR race shops in Charlotte; and, most recently, the Mount Rushmore and Crazy Horse memorials in South Dakota.

“We're more tourists than we are racers,” joked King, whose father has only seen a handful of his WoO starts in person because he's stayed home to work and race his big-block modified. “We've gone everywhere. I could care less about all that stuff, but mom and Bob (Bachman, his crew chief) like doing it — and as long as they're happy, I'm happy.”

King, whose father will miss Saturday's show at Sharon because of a conflicting BRP Modified Tour event at Tyler County Speedway in Middlebourne, W.Va., will be even happier if he can soon bag his first top-five of the season. A run like that would go a long way in propelling him toward his goal of winning the 2009 rookie crown.

“We're going to some of my favorite tracks — like Sharon and Tri-City (Speedway in Franklin, Pa., on Sept. 5-6) — so hopefully we have at least one top-five in us,” said King, who has attended a couple Saturday-night shows this season at Sharon to assist the big-block efforts of his father and younger brother Rex Jr. “I know my cars are good enough. It's just a matter of whether I can drive it up there.”