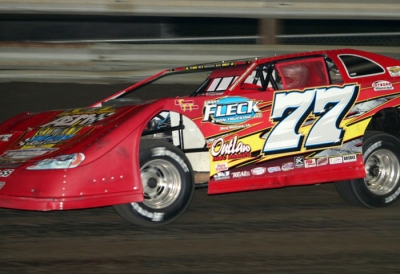 OSKALOOSA, Iowa (July 22) – The trophy presentation that followed Jeff Aikey’s 49th career Deery Brothers Summer Series victory was accompanied by plenty of smiles and not a few tears. Aikey started on the pole and led all 35 laps of the IMCA Late Model tour event Wednesday night at Southern Iowa Speedway, taking the $2,000 checkers a straightaway in front of runner-up Tommy Elston of Keokuk, Iowa. | Slideshow

The Oskaloosa win came a week after Aikey’s mother Anne was hospitalized following a stroke.

“This was an emotional night for us. My mom hardly misses a race,” said the five-time series champion and current point leader from Waterloo, Iowa. “It was a pretty special win and I’ve told my crew that we’re not done. We’re going to get more.”

The only cautions of the contest came out early, on the first and fourth laps. Ray Guss Jr. of Milan, Ill., driving the Hershel Roberts No. 58, got into the wall on lap four and was able to continue, but struggled home in 18th to fall further off the grueling points pace set by Aikey and Frankel.

Aikey caught up with the back of the field by lap 12. Elston lost ground in traffic while Frankel made a steady advance, into fifth on lap 25 and into fourth on lap 31. Series rookie contender Justin Kay also moved up seven spots, to ninth.

The win was Aikey’s Deery career fourth at Oskaloosa and his first since June 19, 2007 at Marshalltown.

Three Iowa races in as many nights are on tap next week for the series, on July 28 at I-35 Speedway in Mason City, on July 29 at Highway 3 Raceway in Allison and on July 30 at Jackson County Speedway in Maquoketa.