Korte tops Moyer, Erb for special victory at I-55 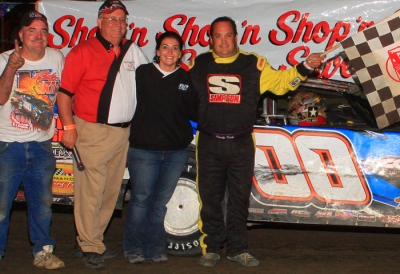 PEVELY, Mo. (July 18) — Randy Korte of Highland, Ill., held off Dennis Erb Jr. and later Billy Moyer for a $5,000 victory at I-55 Raceway on the Race Night for Special Champions. While Korte was the big winner on the track Saturday night, the fundraiser also sent $5 from each ticket sold to Special Olympics.

Korte started on the pole and led all 30 laps in the UMP DIRTcar-sanctioned event, but he had his fans full with fellow front-row starter Erb of Carpentersville, Ill., through much of the race. Erb kept the heat on Korte as they maneuvered through lapped traffic at the high-banked quarter-mile oval.

The fifth-starting Moyer, of Batesville, Ark., grabbed the second spot from Erb amid traffic and contact between Moyer and Erb entering turn one nearly sent Erb spinning. Moyer took up the chase in second, but he fell short in trying to catch Korte while Erb finished third. Sixth-starting Brian Shirley of Chatham, Ill., was fourth and fourth-starting Mark Voigt of Marine, Ill., rounded out the top five.

Notes: Korte's Rocket Chassis is sponsored by Kehrer Bros. Roofing, TE Motorsports and Gulf Eagle Supply. ... The night's racing is sponsored by Shop 'n Save grocers. ... Helping promote the event was afternoon deejay Bo Matthews of WIL 92.3. ... Track co-owner Ken Schrader won the modified feature. ... Finishing eighth in the Late Model feature was modified ace Alan Mondus of Lakeville, Minn., making just his second start in a Dirt Late Model. He was two spots behind mentor Terry Casey. ... The next Late Model special at I-55 is a $5,000-to-win event for the Aug. 29 visit by the O'Reilly MARS DIRTcar Series.