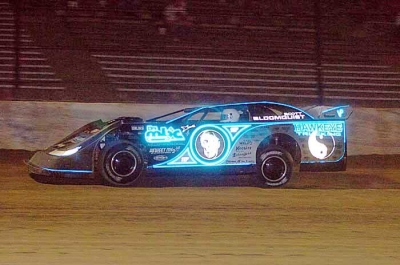 ROSSBURG, Ohio (Oct. 6) — Former Dream and World 100 winner Scott Bloomquist scored another first at Eldora Speedway: His first victory in the United Midwestern Promoters Fall Nationals. Bloomquist, 42, made a strong run to the front in the 40-lap main event, advancing from the ninth starting spot to grab the lead on lap 21 from Josh Richards of Shinnston, W.Va. A former winner of the half-mile oval’s more prestigious events, Bloomquist pulled away in the caution-free event to pocket the $10,000 top prize by a straightaway over Richards. | Video | Slideshow

With the two-day program closing out the 2007 UMP points season, Dennis Erb Jr. of Carpentersville, Ill., was crowned the Late Model weekly champion. He'll receive a $20,000 check at the UMP banquet scheduled for Jan. 12 in Springfield, Ill.

In the feature, Bloomquist gained a dose of redemption for disappointing performances in the World 100 and the previous weekend's Lucas Oil Knoxville Late Model Nationals. His unspectacular run in Knoxville, Iowa, actually prompted him to enter Eldora's season finale.

“We weren’t happy with how we ran last week,” Bloomquist said of piloting his Team Zero machine to victory. “We went home and stripped down the car and came here to see if we could get back on track.”

Bloomquist accomplished that goal, running a flawless race in his familiar No. 0. The 19-year-old Richards, who started sixth, beat Bloomquist to the front of the field, but he couldn’t hold off the veteran.

“We should’ve been set up like this for (the World 100),” said Bloomquist. “Then we might’ve had something for ‘em.”

Richards, who passed polesitter Dan Schlieper of Sullivan, Wis., for the lead on lap 13, was a runner-up in the UMP DIRTcar Racing Fall Nationals for the second consecutive year.

“We were off just a little bit,” said Richards, who drove his father Mark’s Rocket Chassis house car. “When we got to lapped traffic, he was just more maneuverable. I had to move my car up the racetrack more to get through the corners.”

Erb started and finished third after racing right on Richards’ rear bumper for the final quarter of the race. Jeep Van Wormer of Pinconning, Mich., advanced from the 20th starting spot to finish a fast-closing fourth without the benefit of a caution flag, and Schlieper settled for fifth after leading laps 1-12.

The low-key Erb joined modified champion Denny Schwartz on the frontstretch after the Late Model finale to receive recognition for his national championship. He made UMP history as the first driver to win both the Summernationals and national crowns in the same season.

“When we came out of the Summernationals and saw we had a shot at the national deal, we decided to take a shot at it,” said Erb. “Some people said that we couldn’t do it, but when they say that it just gives you a little bit of extra incentive. We just did the best we could do, kept plugging away, and we got it done.”

Bloomquist's Vic Hill-powered machine is sponsored by Miller Bros. Coal, Hawkeye Trucking and Allstar Performance. ... Saturday’s heat races were won by Richards, Wayne Chinn of Tipp City, Ohio, Steve Sheppard Jr. of New Berlin, Ill., Schlieper, Erb and Rick Delong of Whitehouse, Ohio. ... The consolation races were claimed by Jason Montgomery of Jackson, Ohio, Van Wormer and Randy Korte of Highland, Ill. ... Jared Hawkins of Fairmont, W.Va., crossed the finish line first in the sixth heat, but he was disqualified for weighing in 3 pounds light with his car after the event.