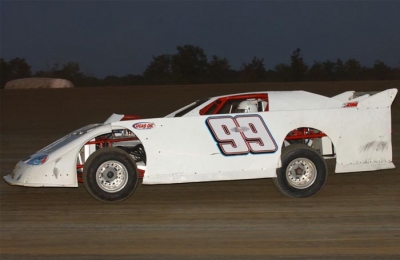 Three generations of Moran men will greet the World of Outlaws Late Model Series when the tour kicks off Ohio Speedweek on Thursday night at Muskingum County Speedway.

First there is Ronnie Moran, the 72-year-old family patriarch who has owned the 3/8-mile oval since 1980 and promoted it since 1992. He'll be the one worrying about whether all goes well for the big influx of racers and fans that is expected to witness the evening's 40-lap, $7,000-to-win event. | Donnie Moran VideoCast

Then there is Donnie Moran, a 46-year-old dirt Late Model legend who happens to be Ronnie's son. An increasingly larger figure in the facility's operation, Donnie will put his day-to-day duties at Muskingum aside to welcome the World of Outlaws and try to beat the tour's stars at his home track.

And finally there is Devin Moran, Donnie's 14-year-old son. Devin will look to continue his impressive rookie season behind the wheel of a full-blown dirt Late Model with his first career WoO start.

It will be up to Donnie and Devin to keep some of purse from leaving the family — and both father-and-son are ready to take on the Outlaws challenge.

Donnie Moran, who ranks as one of the Dirt Late Model division's all-time greats, enters July 23's action with a decidedly different racing outlook than in past years. He's no longer traipsing all across the country with his Donnie Moran Racing operation, preferring instead to race a more localized schedule that allows him to spend more time working at the racetrack and with the budding young talent who lives under his roof.

“I've tried to stay closer to home this year to help my father with the speedway and teach my son to race,” said Donnie, who need only walk over a hill to reach the track from his house in Dresden, Ohio. “I've been doing more than I ever have at the speedway — everything from cutting grass to the maintenance of equipment to prepping the track (surface) early in the week — and I've been at almost all of my son's races.

“I'm so glad I've done this,” he added, calling the time he's spent with his son “priceless.”

Donnie feels good about the rapid progression of his son, who has run a MasterSbilt Race Car owned by his grandfather only at Muskingum County. So far this season Devin — the second of Donnie's five children (four boys and a girl) — has earned a fast-time honor, finished as high as second in a feature and started a Lucas Oil Late Model Dirt Series (finishing 18th) at his home track.

“Everything I've learned in my 30 years of racing, I've tried to teach him in the last six months,” Donnie said of Devin. “He wants to learn, and he knows that if he wants to race he's going to have to give up a lot. When our other kids go to the swimming pool (this summer), he'll be in the garage working on his car by himself.”

Devin has led the last two features contested at Muskingum County, but he's fallen short of victory lane on both occasions. Last Saturday night he ceded the top spot when he momentarily slid off the track, and on July 11 he settled for runner-up money after being passed for the win — by dear old Dad.

“He had a lot of fans behind him (on July 11) because they wanted him to beat his old man, but I'm not gonna cut him any slack,” Donnie said. “He's gonna have to earn his first win. It'll only make him stronger.”

Donnie has four wins in six starts this season at Muskingum, giving him plenty of momentum for the WoO invasion. But he has no illusions about his chances; he's still trying to work the bugs out of his new car — the last machine constructed by late chassis builder Ray Callahan before his passing earlier this year — and realizes the level of competition he'll be facing.

“I think I have a good shot, but I'm not gonna say I'll come out and blow the doors off the Outlaws,” said Donnie, who has the equipment (jigs, benders, etc.) in his shop to begin producing cars for sale if his Callahan-designed mount takes off. “You just don't do that. Those guys are too good.

“In today's world of racing, everything is so competitive that nobody knows who's gonna hit it right on any given night. I'd like to win in front of the hometown crowd, but I'm just gonna go out there and set my goals as the night goes on.”

More on the Morans

Later this week, DirtonDirt.com plans a VideoCast that will include an interview with Donnie Moran. Look for it in the video section.