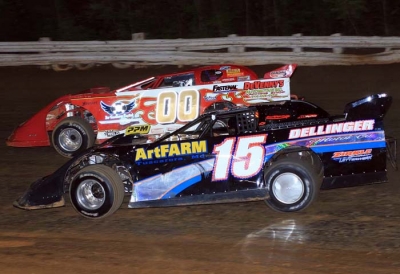 Booper Bare earned $4,000 for winning the 40-lap Red Nininger Memorial, which served as the night's opening feature after being postponed by rain June 20. In Saturday's nightcap, Armel collected $3,000 for his victory in the Paul Johnson Memorial.

In the opener, Anderson started on the pole and led the first eight laps, but Bare took advantage of an early restart and took command to lead the rest of the way. A few more cautions didn't cause Bare any problems the rest of the way and he raced to victory over Anderson while Gerald Davis of Delray, W.Va., finished third. D.J. Myers of Greencastle, Pa., and hometown driver Bo Feathers rounded out the top five.

In the finale, Feathers led the first lap from outside the front row, but the polesitter Armel took over on the second lap and led the rest of the way, building a huge lead before a lap-18 caution for contact between Anderson and Allen Brannon triggered a wreck that included Kris Eaton and Davis. Anderson charged toward the front and had a last chance at Armel on a restart following a lap-29 caution, but he settled for second with Ronnie DeHaven Jr. of Winchester in third. Keith Jackson of Odenton, Md., and Davis rounded out the top five.

Notes: Bare's Rocket Chassis is sponsored by Dave Poske's Performance Parts. ... Armel's No. 15 is sponsored by ArtFarm and Dellinger Motor Co. ... Bare failed to make the starting field for the second feature. ... Armel's victory was his fourth of the season at Winchester. ... Series points leader Jason Covert of York Haven, Pa., posted 11th- and ninth-place finishes. ... Next up for the first-year Three State Flyers is a pair of $3,000-to-win events July 24-25 at Potomac Speedway in Budds Creek, Md. There's a $1,000 bonus to any drew who can sweep both features.