Chamberlain leads all the way at Twin Cities 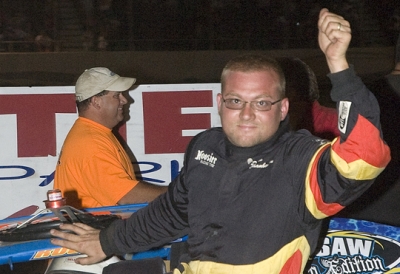 NORTH VERNON, Ind. (July 17) — Starting outside the front row, Duane Chamberlain of Richmond, Ind., led all 50 laps of the Ted Collins Memorial at Twin Cities Raceway Park, turning back a late challenge from Chub Frank of Bear Lake, Pa. Chamberlain earned $5,000 for the victory on the first-year O'Reilly All Star Series circuit.

Chamberlain was in control all the way, but Frank got up to second on the 38th lap and turned up the heat. Chamberlain was able to fend off the challenges, including over the final two laps after a late caution for Mike Jewell of Scottsburg, Ind.

Frank settled for second with Scott James of Lawrenceburg, Ind., third. Matt Miller of Waterville, Ohio, was fourth and polesitter John Gill of Mitchell, Ind., who ran second until getting into the marbles exiting turn two on a lap-22 restart, rounded out the top five.

Jason Jameson of Lawrenceburg was running in the top five when a flat tire on the 41st lap knocked him out of contention. He ended up 15th.

Notes: Chamberlain's Rocket Chassis has an SMS Racing Engine and sponsorship from Miracle Racing, C.W. Watson Excavating and MAC Enterprises. ... The victory marked Chamberlain's first-ever at Twin Cities. ... Rob Blair's spin brought out the first of three cautions; all the yellows were for single-car incidents. ... The next Late Model event at Twin Cities is for a Crate Late Model tour, the Indiana Late Model Series on Aug. 8.