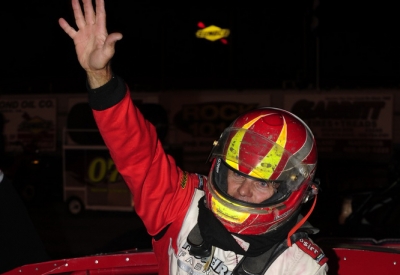 DONIPHAN, Neb. (July 17-18) — Kelly Boen of Henderson, Colo., swept both features of the 18th annual O'Reilly NCRA Late Model Nationals at Mid-Nebraska Speedway to earn more than $5,000 on the weekend. Former track champion Kyle Berck of Marquette, Neb., posted second- and third-place finishes on the weekend, but it was all Boen as the Colorado driver earned his sixth and seventh NCRA victories at the 3/8-mile oval. | Friday slideshow | Saturday slideshow

"I just took my time and let the field get strung out and decided at the halfway point to pick up the pace," Boen said after the finale as he notched his series-leading 37th career victory. "We just come into this place with a basic setup as we do all of the racetracks and it just seems to work here. The track was really good and fast tonight and it was really a fun race."

In Friday's 30-lap opener, Ronnie Wallace started outside the front row and built an early lead while the fifth-starting Boen was up to second after just three laps. Boen quickly erased Wallace's eight-length lead, took command and rolled to victory. Berck rallied from 10th to second after 10 laps but finished a straightaway behind the winner. Polesitter Delbert Smith was third followed by Wallace and Jason Friesen.

In Saturday's 40-lap weekend finale, Berck took the lead from outside the front row with the fourth-starting Boen quickly taking second from polesitter Jerry Warner. Boen quickly cut Berck's 10-length lead in half and the frontrunners pulled away from the field. Boen closed in on Berck at lap 15, then slipped under Berck exiting turn two on the 19th lap and took the lead down the backstretch. A caution for Jason O'Brien's lap-31 spin slowed Boen, but he raced to victory while local favorite Al Humphrey took second from Berck in late stages.