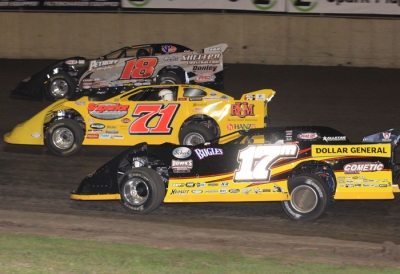 GRANITE CITY, Ill. (July 17) — With a season-long turnaround finally showing up where it counts, Don O'Neal of Martinsville, Ind., won at Tri-City Speedway for his second Lucas Oil Late Model Dirt Series in the last three series events. O'Neal, who battled polesitter Shannon Babb through the first half of the race, earned $10,000 for his 12th career series victory.

Dale McDowell of Rossville, Ga., finished second followed by Dennis Erb Jr. of Carpentersville, Ill., and 11th-starting Brian Birkhofer of Muscatine, Iowa. Jimmy Mars of Menomonie, Wis., rounded out the top five while Babb ended up 23rd after a lap-28 flat tire knocked him out of contention.

O'Neal thanked his crew for putting together a brand new MasterSbilt Race Cars house car that carried him to victory on a track surface rough in turn three and four after heavy rain all week.

"This was a brand new car, first time we've had it on the track and I couldn't be happier with the outcome," said the 45-year-old O'Neal, who won a week earlier at North Alabama Speedway. "Me and Babb had a good clean race out there until he had the flat and to hold on out there with the way the track was, I know they did the best they could with the track and with all the rain it was definitely choppy but we survived."

When a flat tire for Moyer brought out a lap-14 yellow, O'Neal took advantage on the restart to overtake Babb as they began a lead-swapping duel even as they encountered heavy traffic. The high-running Babb went back ahead on the 19th lap and edged away, but his ill-fated run ended on the 28th lap when he slowed crossing the start-finish line with a flat.

O'Neal led the final 22 laps, surviving a lap-34 caution for a slowing Brad Neat of Dunnville, Ky., and holding a comfortable lead in the race's late stages.

McDowell's runner-up finish pushed him back to second in the series points standings as he was able to cut into the solid points lead Scott Bloomquist of Mooresburg, Tenn., has had the last few months. Bloomquist finished ninth.

"It was a good finish for us and helps us in points," McDowell said. "That's our goal to win the championship and we just keep inching up there ever so slightly."

Erb, fresh off a UMP DIRTcar Summernationals crown, was pleased with a third-place finish in one of his rare series starts since a Florida Speedweeks series victory at East Bay Raceway Park.

"To run third with these guys (is) great," Erb said. "We had a really good race with Feger out there — we ran I don't know how many laps side-by-side — and there at the end we closed on McDowell, but we just ran out of laps."