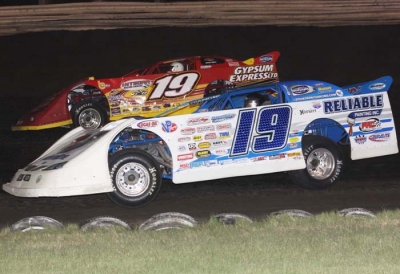 Steve Francis (inside) battles for the lead. (crpphotos.com)

HURON, S.D. (July 16) — Sometimes the leader is a sitting duck for drivers behind him who see how a race is developing. That's the position Steve Francis of Ashland, Ky., found himself in Thursday at Dakota State Fair Speedway for the World of Outlaws Late Model Series Great Plains 50. | Richards wins at Huron

Francis, the 2007 WoO champion, led laps 9-11 and 13-32 in finishing second to Josh Richards of Shinnston, W.Va., who made an outside move on Francis on the 33rd lap after Brady Smith of Solon Springs, Wis., rallied to third in showing everyone the middle groove was working.

“It sucks to lose when you have a car as good as we did,” said Francis, who started sixth in the Beitler Motorsports Rocket. “We just got to conserving and running too slow on the bottom. Once everybody behind us saw Brady move up and pass cars, they realized they had to be wider on entrance (to the corners) and we were a sitting duck.”

In racing to his series-leading seventh WoO victory at Huron, Josh Richards made sure to take care of the rubber on his car on a fast half-mile oval that produced significant tire wear.

“I knew the (Hoosier) tire we had on could take some abuse, but you still had to be careful," Richards said. "So when I was behind Francis (after he passed Tim Fuller for second on a lap-21 restart), I just started cruising around there, running half-throttle, giving it the gas on the straightaways and coasting through the corners.”

Richards picked up the pace when he felt pressure from Brady Smith, who was running slightly higher on the track in rallying from his 13th starting spot.

“It was definitely a nerve-racking last 20 laps,” Richards added. “I kept seeing guys getting flats, so I tried to keep conserving the best I could. I figured that if I saw anybody, I could always pick the pace back up.”

Polesitter Rick Eckert of York, Pa., had to be satisfied with a fourth-place finish at Huron after slipping backward at the drop of the green flag. He watched Brady Smith step to the outside to march forward but couldn't duplicate that maneuver with his own Bloomquist Race Car.

“Brady's car was just good,” Eckert said. “That rubber (on the track) that Brady was in was there for anybody, but your car had to be good to use it. I was too tight to go out there.”

Clint Smith of Senoia, Ga., finished fifth at Dakota State Fair Speedway despite racing virtually the entire distance without power steering in his GRT Race Car. The 50-lapper left him worn out.

“I couldn't race anybody,” said Smith, who enjoyed his second consecutive fifth-place finish. “I had to rest my left arm going down the straightaways so I could tug on the steering wheel with all the strength in my left arm every time I went into the corners.”

Reigning series champion Darrell Lanigan of Union, Ky., placed seventh at Huron after running in the top five before a flat left-rear tire forced him to pit on lap 30. ... Shane Clanton of Locust Grove, Ga., slipped from a third-place starting spot to eighth at the finish. ... The series returned to Dakota State Fair Speedway for the first time since 2005. ... WoO competitors take a short break before kicking off the four-race Ohio Speedweek on July 23 at Muskingum County Speedway in Zanesville, Ohio. The swing will also visit Attica (Ohio) Raceway Park on July 24; Sharon Speedway in Hartford, Ohio, on July 25; and Eriez Speedway in Hammett, Pa., on July 26.