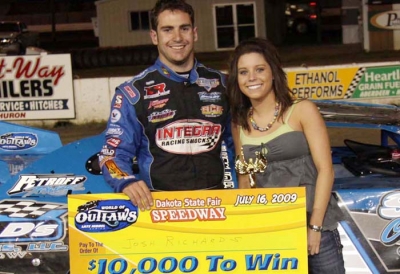 The 21-year-old sensation from Shinnston, W.Va., regained the points lead with his second win of the four-race western swing and series-leading seventh triumph of the season — a $10,600 checkered flag he earned using equal parts speed and smarts. | Notebook | Slideshow

Running on a fast half-mile oval that produced significant tire wear, Richards calmly overtook Steve Francis of Ashland, Ky., for the lead on lap 33 and maintained command for the remainder of the distance. He survived the race's sixth and final caution flag, on lap 39, to defeat Francis by 1.404 seconds.

“You had to think about this race,” said Richards, who bettered his personal single-season high of six WoO victories from last season. “It was just like running on pavement. You could run around there wide-open if you wanted to pretty much all the way from the bottom to the middle because you're stuck so hard (to the track surface), but you had to conserve a little bit if you wanted to make it to the finish."

Richards, who started fourth in his Seubert Calf Ranches Rocket car, got the jolt he needed to step on the gas when he saw Brady Smith of Solon Springs, Wis., appear to his outside just before a caution flag flew on lap 32. Smith had made a stirring charge from the 13th starting spot to the verge of second place by running slightly higher on the track — an advance that ultimately ended after Smith pitted during a lap-39 caution period to change a left-rear tire that had been flattened from turn-four contact with Fuller one circuit earlier.

“When I saw Brady run his nose up on me before that caution, I knew the outside was good,” said Richards. “So on the restart, Francis was going so slow (in the lead), I just rolled around him (on the outside of turn three) and figured I could try to maintain a steady pace the rest of way."

Richards survived to register his 19th career WoO victory, moving him past Eckert into sole possession of second on the tour's win list since 2004. He left the track shortly after the race to drive more than 300 miles to the airport in Omaha, Neb., where he was scheduled to fly out early in the morning in order to make his ARCA superspeedway debut this weekend at Kentucky Speedway in Sparta, Ky.