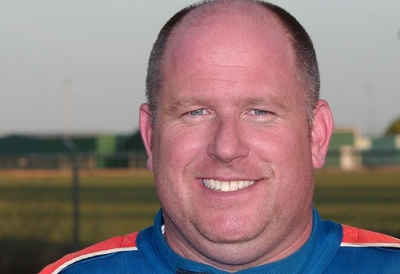 Mike Johnson knows the fast way around Santa Maria Speedway and he's riding a hot streak. That could prove to be a dangerous combination for Johnson's rivals Saturday when the Western Allstars DIRTcar Late Model Series makes its second visit of the 2009 season to the third-mile oval in Southern California.

Johnson, 39, of Lompoc, Calif., enters July 18's action at his long-time home track with two consecutive Western Allstars victories under his belt. He won on June 20 at Antioch (Calif.) Speedway and July 11 at Chowchilla (Calif.) Speedway.

“I'm looking forward to Saturday night,” said Johnson, who captured back-to-back Dirt Late Model track titles at the speedway in 2005 and 2006. “I always enjoy going to Santa Maria. It's only 40 minutes from my house and I started my career there. We're on a pretty good roll right now and hopefully we can keep it going.”

Johnson will also seek to erase memories of his first Western Allstars start of the season at Santa Maria, a quiet 12th-place finish on May 9. He started 10th and was never a factor.

“We tried something different and obviously it didn't work,” said Johnson, who makes his living as an automotive driving instructor at Lompoc High School. “We're gonna go back to a pretty basic setup this time and see if we can do a little better.”

There haven't been many bad nights this year for Johnson, who sits second in the Western Allstars points through seven events. He trails Bobby Hogge IV of Salinas, Calif., by 43 points (1,079-1,036) in pursuit of his second career tour title.

“I want to win the championship bad,” said Johnson, who captured the points crown in 2007 but didn't compete for the title last season. “I'd like to be the first driver to win two championships, but beating Bobby Hogge is going to be a tough thing. He's just so strong and consistent.”

Johnson did get one up on Hogge in the last Western Allstars event, scoring a dramatic victory over the 32-year-old points leader at Chowchilla. Johnson was in the process of overtaking Hogge's ailing car for second when leader Chris Shannon of Merced, Calif., broke the fifth-member bracket on his machine and slapped the outside wall with three laps remaining, sending the defending Western Allstars champion to the infield and Johnson to his 10th career win on the West Coast's premier Dirt Late Model tour.

“I had just gotten by Nick (Bartels) for third when another yellow came out,” said Johnson, who ranks second on the all-time Western Allstars victories list behind Hogge (12 victories). “I would've been happy finishing third with my car in one piece, but after we went green I saw Bobby's car was getting tight because it had something broke.

Johnson is making his championship bid driving for Zack Forster Racing, a three-driver operation based in Bakersfield, Calif. His teammates include team owner Zack Forster, who enters selected events, and Johnny Malcolm of Corona, Calif., who also handles preparation of the Forster Racing equipment as the team's full-time mechanic.

“I have to thank Zack Forster for giving me a chance to race this year,” said Johnson, a 22-year racing veteran who campaigns a Victory Circle chassis with a Jay Dickens-built engine under the hood. “I didn't have anything going until I talked with Zach at the end of last year. He's given me some great equipment to go racing."