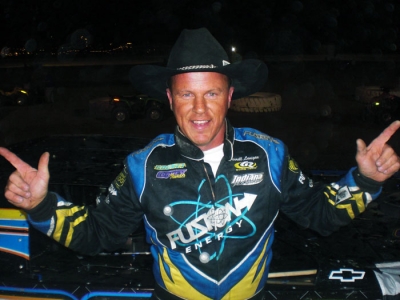 The low-key defending series champion from Union, Ky., happily donned a cowboy hat for the victory lane ceremonies after pocketing $10,700 in prize money. He grabbed the lead from Steve Francis of Ashland, Ky., on lap 34 while negotiating lapped traffic and never looked back.

Lanigan, 39, regained the WoO points lead by four points over Josh Richards of Shinnston, W.Va., who finished 11th after a flat right-rear tire on lap 34 forced him to the rear of the field. Francis, who settled for second after racing off the pole position to lead laps 1-33, sits third in the standings just 10 points behind Lanigan.

“We have a real good car and now we're getting some of the breaks we didn't get earlier this year,” said Lanigan, who had five runner-up finishes before breaking through for his first win of the season in the Wild West Tour opener July 8 at Deer Creek Speedway in Spring Valley, Minn. “Everything's come together on this trip. I think that if we didn't have a few problems the other night (July 10 at River Cities Speedway in Grand Forks, N.D.), we could've won all three of these races.”

Lanigan, who finished seventh at River Cities after leading early in the 50-lapper, drove his Fusion Energy Rocket car across Gillette's finish line with a 1.319-second advantage over Francis's Beitler Motorsports Rocket.

Shane Clanton of Locust Grove, Ga., advanced from the ninth starting spot to place third in the RSD Enterprises Rocket. He moved into the position on lap 46 after sliding underneath the Gypsum Express Rocket driven by eighth-starting Tim Fuller of Watertown, N.Y., who finished fourth one year after winning at the third-mile oval in northeastern Wyoming.

Clint Smith of Senoia, Ga., was the evening's hard charger, steering his GRT Race Car to a fifth-place finish after starting 21st. He had to qualify through a consolation race after a broken jackshaft sidelined him during heat-race action.

Lanigan, who started third, gained control of second from outside-polesitter Rick Eckert of York, Pa., early in the distance. He then chased Francis between six caution periods during the race's first 24 laps before seizing an opportunity amid slower traffic to assume command rounding turns three and four on the 34th tour.

“He got trapped there in lapped traffic,” said Lanigan said of Francis. “I knew we were better on the outside and he was committed to the bottom, so I just kept rolling that top and finally it paid off when a lapped car slowed (Francis) down.”

After a seventh and final caution flag, on lap 34 for Richards, Lanigan ran virtually unchallenged for the remainder of the event. He calmly handled lapped traffic on the smooth, multigrooved surface to keep Francis at bay.

“The racetrack was excellent,” said Lanigan, who recorded his 12th career victory on the WoO. “You could run all over it, and it's a place where you don't tear stuff up. I like tracks like this.”

Francis, 41, admitted that he was surprised by Lanigan's winning move, but he wasn't disappointed with the outcome.

“I didn't even know he was there,” Francis said of the deciding 34th lap. “So looking back, maybe I should've just turned (the lapped car) and went on my way instead of trying to be careful. But with the tires we put on, I was locked down to (running) the bottom.

“I would've liked to win, but with the way our luck's been out here, we'll take a second and go on to the next race.”

There were no major incidents in the Cowboy 50, which saw WoO regulars sweep the top seven finishing positions.

Track regular Eddie Kirchoff of Gillette, Wyo., who entered the night with six wins in eight starts this season at his hometown speedway, started fifth but was never a factor. He fell back almost immediately after the green flag flew with a car he deemed “too tight” and was eliminated when a tangle on lap 22 left his machine with a bent left-front spindle.

Finishing in positions 6-10 was Brady Smith of Solon Springs, Wis., who ran as high as fourth; Eckert; seventh-starter Jimmy Mars of Menomonie, Wis., who climbed up to third but faded during the race's second half due to an improper tire choice; Chub Frank of Bear Lake, Pa.; and Al Purkey of Coffeyville, Kan., who earned the $500 WoO Bonus Bucks cash (highest-finishing driver who hasn't won a tour event and isn't ranked among the top 12 in the points standings) for the third time in as many Wild West Tour events.

A field of 37 cars signed in for the event, which was contested on a cool, breezy evening. Steady winds of 30 mph — with gusts reaching nearly 40 mph — blew clouds of dust through the pit area throughout the afternoon, but the winds gradually diminished to more comfortable levels as the night went on.

Pat Doar of New Richmond, Wis., was quickest in Ohlins Shocks Time Trials, ripping off a lap of 13.971 seconds to register his first career fast-time honor in WoO competition. The 14-year-old Tyler Reddick's victory in the first consolation race marked his first checkered flag of any kind on the WoO. He went on to finish one lap down in 15th.