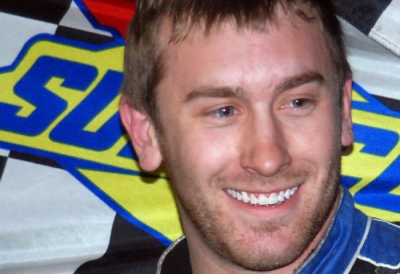 Eddie Kirchoff has been spectacular this season at Gillette (Wyo.) Thunder Speedway, winning six of the track's eight dirt Late Model features en route to a commanding points lead. But if the hometown boy is going to make his record 7-for-9 on July 14, he'll have to run the race of his life.

The 26-year-old Gillette driver knows it's going to take a flawless effort to turn back the invading World of Outlaws Late Model Series stars in Tuesday's Cowboy 50, a $10,000-to-win event that highlights the third-mile oval's schedule for the second consecutive year.

“These (WoO) guys race for a living, so you have to bring your best A-game if you're going to have any chance of beating them,” said Kirchoff, whose success at the Wyoming facility stamps him as the local crowd's greatest hope for upsetting the Outlaws. “It's definitely going to be a challenge. We're familiar with the track, but we'll be running against the best guys in the country and it doesn't take them long to figure a place out.”

Kirchoff performed admirably in last year's inaugural WoO event at Gillette, finishing 15th (last driver on the lead lap) in a race that saw tour regular Tim Fuller of Watertown, N.Y., won after a dramatic late-race battle for the lead with Jimmy Mars of Menomonie, Wis. Kirchoff qualified 11th of 36 cars in time trials, transferred through a heat race and was the highest-finishing Gillette regular, but he wasn't satisfied with his final result.

“We guessed wrong on tires (compound choice) for the feature,” said Kirchoff, who started sixth in the 50-lapper but gradually faded from contention. “Playing that tire game is the toughest thing for us when the Outlaws come in (to Gillette). All we ever run is (Hoosier) 55s, but the Outlaws have an open tire rule so picking tires takes a little time for us to get used to.”

While selecting the correct tire compound for Tuesday's action might prove challenging for Kirchoff, he certainly has the equipment to battle the Outlaws. He'll make his third start of the season with his open-competition motor package: a new MasterSbilt by Mars car powered by a Jay Dickens-built engine.

Buoying Kirchoff's hopes, he'll receive some setup assistance on Tuesday from Mars, the standout Midwestern racer from whom Kirchoff purchased his new car. Mars enters Gillette as one of the country's hottest dirt Late Model drivers.

“It will be great to have Jimmy there to talk about setups and stuff,” Kirchoff said of Mars, who pocketed over $30,000 for winning last month's WoO-sanctioned Firecracker 100 at Lernerville Speedway in Sarver, Pa. “He came over to my car last year and really helped me out with some ideas.”

Kirchoff, who also has a victory this season at Black Hills Speedway in Rapid City, S.D., sees the WoO as the elite level of dirt Late Model racing that he would someday like to reach. But while Kirchoff got a taste of life on the road when he followed the grueling, month-long UMP DIRTcar Summernationals tour in 2007, he said it will be several years before he seriously considers taking his family-owned team far from home to battle the sport's top stars.

At the moment, Kirchoff is content racing on weekends while concentrating on his job as an engineer at Jacob Ranch Mine, a coal mine in Wright, Wyo., about 45 minutes south of Gillette. He took the position after graduating last December with an industrial engineering degree from the South Dakota School of Mines & Technology in Rapid City.

“I'd love to race on a national series like the World of Outlaws someday,” said Kirchoff, whose father, Ed, leads the Gillette Racing Club that operates Gillette Thunder Speedway. “But I thought it would be better for me to get through school and get some experience at my job before thinking about racing more. We'll see where my career goes in the future.”

Yes, Kirchoff's job comes first right now. He's shown the talent for accomplishing bigger things behind the wheel, but work is never far from his mind. In fact, if Kirchoff happens to pull off a huge win on Tuesday night in front of his home crowd, you won't see him celebrating until the wee hours.