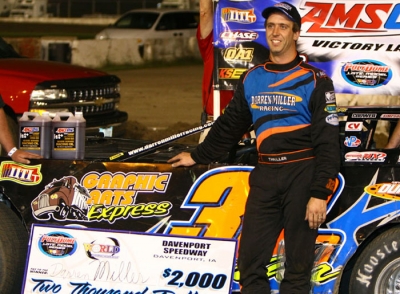 Darren Miller of Chadwick, Ill., lived up to his "Thriller" nickname as he grabbed the World Dirt Racing League Polydome Late Model Series win at Davenport Speedway. Miller had to fend off heavy pressure from Chris Simpson for the $2,000 victory. | Slideshow

As the green flag came out to start the 25-lap feature, Dave Eckrich took a wild ride in turn two. Eckrich’s car ended up cart wheeling, and it came to a stop on top of the turn-two wall. Eckrich was able to walk away, but he was taken to a nearby hospital for observation. Eckrich did return to the track by the end of the night after getting checked out by doctors.

When racing resumed, Eric Pember hustled his car to the point. Pember was on a mission to try and grab some much-needed points and close in on the point leader Justin Fegers, who started eighteenth. Pember led with Chris Simpson in tow. As the lead duo battle in to turn three, Miller moved to the high side and passed both to assume the lead. Pember and Simpson were left to battle for second.

Simpson would eventually clear Pember, and he began to chip away on the lead that Miller had opened up. Simpson narrowed the gap in the closing stages of the race, and he was making a move on the final lap, but the car lost power and came to a stop in turn four as the checkered flag came out. “If we win this thing tonight, we’ll be lucky,” Darren Miller told the fans during the break to clean up after the Dave Eckrich’s crash.

“I guess we were lucky tonight,” Miller said in victory lane. “We were able to pull away as Pember and Simpson battled for second. I didn’t hear Simpson closing in on me. I had my hands full because I lost my power steering at the beginning of the race. If this had been any longer than 25 laps, I don’t think we would have won tonight.”

Brian Birkhofer battle in the top five all night, and he was able to work around Pember in the closing laps to finish second. Pember finished third. Ray Guss Jr. drove injured Brian Harris’ car to a fourth-place finish. Harris, who was released from the hospital earlier this week, was present at the track, and was greeted by well-wishers glad to see him following a scary crash Sept. 22 in West Liberty, Iowa.

WDRL wraps up the season with a $7,500-to-win event on Saturday night at Davenport.