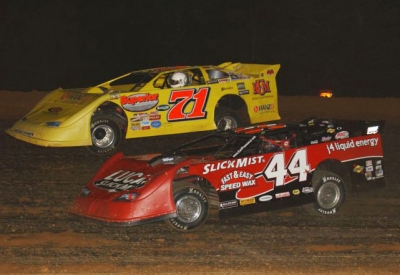 TUSCUMBIA, Ala. (July 10) — He had 45 candles on his birthday cake, but it didn't take 45 laps to celebrate. Birthday boy Don O'Neal of Martinsville, Ind., led all the way in the Heart of Dixie 40 at North Alabama Speedway for his first victory of the season on the Lucas Oil Late Model Dirt Series. O'Neal earned $7,000 for his 11th career series victory but first since the 2008 season opener. | Slideshow

His boys were glad to see Dad break through to become the 19th winner in 24 series races in 2009.

"They were on me pretty good today about not winning in a while, but to win on my birthday is pretty cool," O'Neal said in victory lane. "It feels good to finally win a Lucas Oil race. It seems like forever since we did, but we're really putting together a good team here and hopefully we'll win some more of these before the season's over."

O'Neal started outside the front row and got the jump on the polesitting Pearson with Owens, Moyer and McDowell giving chase. O'Neal went to the high groove with Pearson diving low in trying to catch the leader.

Pearson pulled alongside O'Neal exiting turn four on the ninth lap, but O'Neal maintained his edge as Owens closed in on the frontrunners. Moyer joined the action for a four-car tussle up front as they entered traffic at the halfway point. Pearson made another bid for the point with O'Neal ahead by a nose on lap 22.

With the top four clustered up front, a lap-28 caution appeared for Freddy Smith of Seymour, Tenn., last year's race winner. On the restart, O'Neal stretched to his biggest lead of the race — just four lengths or so — but just as Pearson was preparing for a final bid for the point, the second and final caution appeared on lap 37 for Brad Neat. O'Neal held off any pressure the final three laps for the victory.

Notes: O'Neal's MasterSbilt Race Car has a Jay Dickens Racing Engine and sponsorship from Superior Cleaning, Sunoco Race Fuels, Hoosier Racing Tires, Jeff and Buddy Massengill and Hanzo Logistics. ... O'Neal moved up to fifth in series points with the victory. ... The series completes the weekend with a Saturday event at Magnolia Motor Speedway near Columbus, Miss.