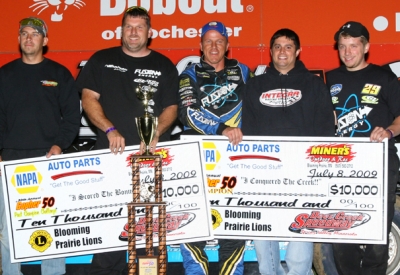 A runner-up five times already this season and riding a frustrating 46-race series winless streak, Lanigan simply refused to lose. The 39-year-old from Union, Ky., roared back in fine fashion, grabbing the top spot from Muscatine, Iowa's Birkhofer on lap 37 and holding on for a hard-earned victory in the opener of the four-race Wild West Tour.

Lanigan pocketed $20,700 for his first WoO triumph of 2009, including an additional $10,000 bonus for past winners posted to celebrate the 30th running of the event. He was also the 2005 winner of the Gopher 50, which benefits the Blooming Prairie (Minn.) Lions Club.

“We've needed this for a while,” said Lanigan, wearing a broad smile while receiving congratulatory handshakes in the pit area. “We've been fast this year, but we haven't had any luck. We finally had some things go our way tonight. Pulling this off with the $10,000 bonus on the line just makes it an even sweeter payoff.”

Lanigan steered his Fusion Energy Rocket car across the finish line 0.850 of a second ahead of Birkhofer, who settled for second place after leading laps 32-36 in his M-B Customs Chassis. A two-time Gopher 50 winner, Birkhofer was also eligible for the 10-grand bonus.

Jimmy Mars of Menomonie, Wis., advanced from the eighth starting spot to finish third in another M-B Customs entry, which he and his brother Chris designed in a collaborative effort with Birkhofer. He reached third shortly after Birkhofer passed Lanigan for the lead, but he never drew close enough to seriously challenge the race's top stars.

Outside front-row starter Tim Fuller of Watertown, N.Y., led laps 1-16 but slipped to fourth at the finish in his Gypsum Express Rocket, and Steve Francis of Ashland, Ky., completed the top five in the Beitler Motorsports Rocket after outdueling Shane Clanton of Locust Grove, Ga., in a tight battle over the race's final 10 laps.

Josh Richards of Shinnston, W.Va., who entered the event leading the WoO points standings, finished eighth after a blown right-rear tire on lap 21 forced him to rally from the rear of the field. He ended the night tied for the points lead with Francis, who installed a backup engine after his heat win, and just four points ahead of third-place Lanigan.

Points, of course, weren't a concern for Lanigan following the Gopher 50. He was just relieved to win on the WoO for the first time since June 25, 2008, at Big Diamond Raceway in Forestville, Pa.

But Lanigan certainly experienced some anxious moments on his way to Victory Lane. Though he quickly marched forward from the sixth starting spot to overtake race-long pacesetter Fuller for the lead on lap 17, he saw his hopes flash in front of his eyes when Birkhofer snuck by him in lapped traffic on lap 32.

“I knew we still had a car that was good enough to come back,” said Lanigan, who registered his 11th career WoO win (and third at Deer Creek). “I just had to get up on the wheel and get it done.

“We were just a little bit better up on the (outside) cushion than (Birkhofer) was. I saw he was pushing up there when I got back to him, and then he pushed real bad one time (in turn four on lap 37) and I went by him.”

Birkhofer, 37, made several bids to regain command while tearing through heavy lapped traffic, but the night belonged to Lanigan.

“I feel like I was a little soft on the left-rear (tire choice) and that hurt me a little bit, but Darrell was good. He made the right moves in traffic and won the race.”

Four caution flags slowed the event, all during the race's first 21 laps. There were no serious incidents.

Finishing in positions 6-10 was Clanton, who struggled late in the distance with a blistered right-rear tire; Al Purkey of Coffeyville, Kan., who earned the $500 WoO ‘Bonus Bucks' cash for being the highest-finishing driver who hasn't won a tour A-Main and wasn't ranked among the top 12 in the points standings; Richards; Clint Smith of Senoia, Ga., who climbed as high as seventh from the 13th starting spot; and Will Vaught of Crane, Mo.

Former Gopher 50 winners in the field who chased the $10,000 bonus were Lanigan, Birkhofer, Rick Eckert (11th) and Chub Frank of Bear Lake, Pa. (ended up spun in turn two on lap 18 and finished 17th). Five other drivers — Mars, Francis, Clanton, Richards and Brady Smith of Solon Springs, Wis., who started from the pole position but faded to a 14th-place finish after losing his car's brakes on lap five — were also eligible for the bonus after being selected by former Gopher 50 winners who were on hand for the 30th annual event but are no longer active entrants in full-blown dirt Late Model events.

The group of former Gopher 50 winners who attended the event as spectators included Leon Plank (inaugural winner), Steve Kosiski, Joe Kosiski, Tom Steuding and Rick Egersdorf. Each of them stood to pocket a $1,000 check if the driver they picked had won the feature.