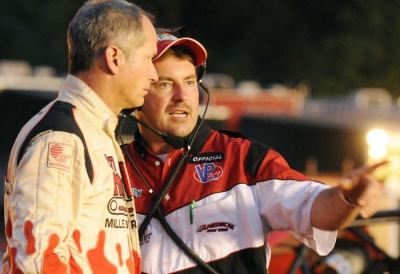 The UMP DIRTcar Summernationals wrap up Saturday, but Southern drivers get their version of the day-after-day racing starting on Monday with the fifth annual O’Reilly Southern Nationals Series, promoted by North Carolina driver Ray Cook. The series is scheduled for 10 dirt tracks in five states over 13 nights, starting with a $3,500-to-win event on July 13 at Wythe Raceway in Rural Retreat, Va. A new series champion, set to earn $5,353, is expected with two-time and reigning champion Chris Madden of Gray Court, S.C., planning to skip the tour in 2009. Check the series schedule for upcoming events. — From series and staff reports

WoO ADDS BREWERTON TO SCHEDULE: The World of Outlaws Late Model Series will make its first-ever visit to Brewerton (N.Y.) Speedway on Sept. 2, track and series officials have announced. A 50-lapper paying $10,000 to win will top the late-summer evening program, which gives central New York big-block modified fans one more chance to see the full-fender stars of the national tour in 2009. John Wight, a trucking company magnate who owns Brewerton Speedway and nearby Fulton (N.Y.) Speedway and also fields modified and Late Model teams under the Gypsum Racing banner, is in the process of increasing the seating capacity of the third-mile Brewerton oval. “As soon as I bought the tracks (in March) I was thinking about having a World of Outlaws Late Model Series race at Brewerton,” Wight said. “Harvey (Fink, who manages Brewerton and Fulton for Wight) said Brewerton didn't have enough seating to run an Outlaw show, so we went out and got more bleachers to make it happen. We're very excited about the race." Following the stop at Brewerton, WoO drivers will head to Tri-City Speedway in Franklin, Pa., for the two-day Oil Region Labor Day Classic on Sept. 5-6. — Kevin Kovac

ANOTHER TENNESSEE VISIT FOR LUCAS OIL: While the July 5 Lucas Oil Late Model Dirt Series event at Tazewell (Tenn.) Speedway was rained out, series drivers will head back to Tazewell for the makeup next month along with another trip to Volunteer Speedway in Bulls Gap, Tenn. The Toyota of Knoxville 60 at Tazewell, a $10,000-to-win event, has been rescheduled for Aug. 21. That will follow two weeknight events at Volunteer Speedway in Bulls Gap, Tenn., as the Lucas Oil Series sanctions The Scorcher for the first time. The Scorcher is scheduled for a pair of $10,000-to-win events on Wednesday, Aug. 19, and Thursday, Aug. 20, preceding a weekend when east Tennessee is abuzz with NASCAR activities at Bristol (Tenn.) Motor Speedway. — James Essex

MALCUIT TAKES OVER WAYNE COUNTY SPEEDWAY: Brad Malcuit, long involved with Dirt Late Model racing as a driver, car owner and engine builder, has leased Wayne County Speedway in Orrville, Ohio. Malcuit plans to operate the 3/8-mile oval through the balance of the 2009 season "I have always loved racing at WCS and have felt that it was my home track," Malcuit said. "I look at this as a great opportunity to continue to entertain a very loyal fan base that has been very strong for the past 44 years and look forward to the new challenge of providing the best on track racing available for all our drivers and fans." Super Late Models will be among five divisions at the Saturday-night track. — Chuck Griffith

OREGON TEAM HOPES TO REBOUND FROM FIRE: The team of Casey Vitale of Albany, Ore., hopes to rebuild from the ground up after a devastating July 3 fire while returning home from a Northwest I-5 DIRTCar Late Model Tour event in Medford, Ore. The team's trailer burned near Roseburg, Ore., on I-5, destroying two race cars, engines, parts, tools and other racing equipment for a loss estimated at $300,000. No one was seriously injured although fire officials reported one person was treated at the scene for smoke inhalation. The cause of the fire is undetermined. The Vitale team's racing is on hold, but they plan to return and are accepting contributions. You can contact the team at (541) 990-8364 or at 3677 South Main Road, Lebanon OR 97355. — Ben Deatherage

OHIO TRACKS PLAN SPRINT-LATE MODEL MATCH RACES: Promoters at northern Ohio tracks Fremont Speedway and Attica Raceway Park have scheduled two special match races between sprint cars. Attica promoter John Bores, a weekly competitor in his track's Late Mode division, along with his son, Mike, also a Late Model driver, will battle Fremont promoters Rich Farmer and Andy James, both former sprint car drivers, in the special events. The Bores team will run Late Models with Farmer and James in 305 sprint cars. "We got to joking around about it and John said 'Let's do it.' We felt the fans might have a lot of fun with this," Farmer said. "We looked at the track records of both divisions at each track and they are pretty close. While the Late Models have more horsepower, they are a lot heavier than the 305 sprint car. ... I think it will be pretty even." The first race is scheduled for July 18 at Fremont with the followup event July 31 at Attica. — Brian Liskai

ODDS AND ENDS: Former WISSOTA weekly champion and WDRL runner-up John Kaanta of Elk Mound, Wis., is out of action after breaking several ribs in a fall while working on his trailer. The 55-year-old Kaanta hopes to return to racing by August. ... The O'Reilly MARS DIRTcar Series has removed several races from the original schedule, including the Aug. 1 date at Nevada (Mo.) Speedway, the Aug. 23 event at State Fair Motor Speedway in Sedalia, Mo., and Oct. 16-17 events at Thunderhill Speedway in Mayetta, Kan. The Thunderhill dates may be replaced. The Aug. 1 cancellation makes way for reigning series champion Terry Phillips of Springfield, Mo., to travel to the unsanctioned USA Nationals at Cedar Lake Speedway in New Richmond, Wis. ... The Northern Tier United Late Model Series has rescheduled the July 3 rainout at Little Valley (N.Y.) Speedway for Sept. 27, increasing the purse to $4,000-to-win.