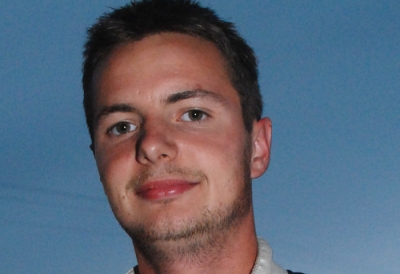 After traipsing all across the country to enter the first 21 events of the 2009 WoO season, Hapka can't wait to drive his rig through the pit gate of his hometrack.

“I've been telling myself all year that I'm gonna approach it like it's just another race,” said Hapka, who estimates that he's already traveled over 25,000 miles as a WoO regular this season. “But the truth is, there's been an asterisk next to the (July 10) date on our calendar all year.

“I want this race on Friday night to be our best finish of the season — hopefully even our first World of Outlaws top-10 finish. It's been a tough year for us so far, but I think we know what to do with the car (at River Cities) so this will be our best shot at it.”

Hapka, 26, has gone through the WoO School of Hard Knocks in 2009. He made a formidable jump this season, deciding to hit the highways with the World of Outlaws stars after just three seasons of WISSOTA Late Model racing, and with barely a dozen open-motor starts under his belt, all during the second half of the 2008 campaign.

Running family-owned Rocket cars sponsored by Sure Step/Enviro Shield Products, Hapka has experienced far more struggle than success while taking on the Dirt Late Model division's biggest talents. He's entered every WoO event in 2009 but started only nine A-Mains, with a 12th-place finish on June 18 at Ohsweken (Ont.) Speedway his best finish to date (his second-fastest lap in qualifying at the Canadian oval was also a season high). He enters the four-race WoO Wild West Tour, which kicks off on July 8 at Deer Creek Speedway in Spring Valley, Minn., before visiting River Cities, ranked 14th in the overall points standings and fourth in the battle for the Rookie of the Year crown (an honor determined by the best 30 finishes).

“Our performance has been a little below the expectations of what we wanted to accomplish this year,” admitted Hapka, who made his full-blown Dirt Late Model debut when he followed last year's Wild West Tour. “But we've learned a bunch this year, especially with tires. I'd say that I've learned more during the first half of this season than I have in my entire career combined.

“We haven't had a lot of success and that can get you down sometimes, but I feel like you've gotta get out there and learn sometime if you want to get better at this. That's what we're doing, and hopefully we'll see the benefits in the future.”

A crew member for such well-known River Cities Speedway racers as the late John Seitz and Brad Seng before entering the WISSOTA Late Model ranks in 2005 after two-year stints in lower divisions, Hapka comes into the swing through his home region with his race team buoyed by the addition of an experienced mechanic. Last week he hired a new chief wrench in 2007 WoO Crew Chief of the Year Brad Baum, whose three-year run as Chub Frank's right-hand man ended shortly after the Firecracker 100 on June 27 at Lernerville Speedway in Sarver, Pa. Baum joins Cale Jopp, who has assisted Hapka all season, on the road.

“We've been a little short-handed with just me and Cale at most of the races, so having Brad working for us now will really help,” said Hapka, who makes his living as a Master Distributor for Interlake Chemicals International's Sure Step product, a non-slip chemical treatment for hard mineral floors and bathtubs.

Hapka failed to qualify for the WoO event at River Cities in 2006 and 2007, but last year he finished 21st after turning the 19th-fastest lap in time trials and finishing second in a consolation race.