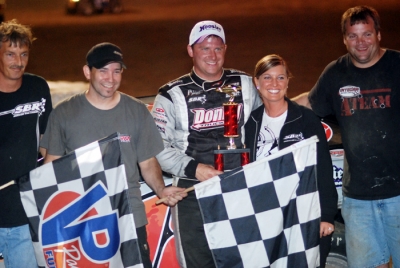 ALEXANDER, Ill. (July 7) — After Shannon Babb went winless through the first 16 races of the UMP DIRTcar Summernationals, the Moweaqua, Ill., driver has turned things around in a big way. The 35-year-old Babb continued his reversal at the new Shepp's Speedway with a flag-to-flag, 40-lap victory for his third series win in four starts. | Slideshow | Complete Summernationals coverage

Starting in the preferred groove outside the front row and sticking with a high line most of the way, Babb turned back a few challenges from polesitter Dennis Erb Jr. of Carpentersville, Ill., and raced to a $6,000 victory, the 58th Summernationals triumph of his career.

"My guys were telling me he was right there," Babb said. "You just try to roll around there and not make any mistakes. It's hard to do on these tight little racetracks, but it's fun."

Erb, who ran second all the way and took a final stab at Babb by pulling nearly alongside exiting turn four on the 34th lap, couldn't keep up in the final laps in finishing second. His runner-up finish tightened an already-tight chase for the $25,000 series crown as Erb unofficially cut Randy Korte's nine-point lead to four points with four races remaining. Korte, of Highland, Ill., rallied from 12th to finish third while Rodney Melvin of Benton, Ill., and Jason Feger of Bloomington, Ill., rounded out the top five.

With Babb taking command early, Erb kept up for a few laps but the leader soon got rolling in his No. 18 Rocket Chassis. By the 13th lap he had a straightaway margin on Erb with a two-lapped-car cushion as he threatened to turn the race into a runaway at the tight-cornered quarter-mile oval with Erb, Mark Voigt of Marine, Ill., Melvin and Brandon Sheppard of New Berlin, Ill., giving chase.

The field was bunch on lap 17 after the race's lone caution for Dustin Linville's flipping accident on the backstretch after a collision with Don O'Neal, who had broken a driveshaft and was heading toward the infield. The 18-year-old Linville of Bryantsville, Ky., had a knot on his right leg but was otherwise uninjured while his car appeared heavily damaged.

Erb stayed closer to Babb on the restart and through the second half of the race, varying his low-groove choice to try and pick up ground.

Behind the top two, Korte was desperately trying to catch Erb — finishing two spots behind would've cost Korte the points lead he's held since June 26 at Paducah, Ky. Up to sixth at the caution, Korte moved past Sheppard and Melvin, then disposed of Voigt with a turn-three slide job to get the third spot on lap 32. Voigt struggled the rest of the way, dropping to ninth.

Up front, Erb was taking his last crack at Babb, getting closer than ever with six laps remaining as the frontrunners exited turn four. But Babb eased away to complete the victory in his first visit to the track.

Thirteen of 21 starters were running at the finish, while three drivers were out quickly. Jeep Van Wormer of Pinconning, Mich., had driveline problems that forced him to take a lap and pull off, while Donny Walden of Towanda, Ill., discovered a broken pull-bar mount just before the race and took a single slow lap. Terry Casey started full speed but spun into the infield between turns three and four on the second lap.

At ninth in series points, Jeep Van Wormer will get the series provisional while Mike Hammerle gets the provisional based on '08 UMP weekly points. Van Wormer's crew is scrambling to swap rear ends before the main event. Roger Brickler gets the track provisional.

In a race with a wild finish where the last two laps took longer than the first 10, Adam Mefford led all the way for his first Summernationals start of '09. Derek Chandler held the second spot most of the way, staying just ahead of a few scrambles in the final laps triggered by a charging Tim Lance. The first time the field took the white flag, Lance made contact with third-running Roger Brickler, who spun in turn one to draw a caution and reset the field. On the restart for a two-lap shootout, Lance dove low in turn three in a bid to get under Brickler (who was restored to the third spot) and Chandler, but Lance spun and sparked a track-blocking wreck that involved seven other cars. Brandon Thirlby (towed off) and Ryan Little (pushed off) got the worst of it, and many of the drivers called it a night before another two-lap dash to the checkers.

In the redraw among heat winners, Dennis Erb Jr. will be on the pole for the 40-lap feature with Shannon Babb to his outside. Rodney Melvin and Mark Voigt will make up the second-row for the 21-car field. The B-Main is coming up, transferring two cars to the ninth row of the lineup.

Outside front-row starter Mark Voigt got the jump on polesitter Terry Casey and led all the way. Casey and Randy Korte were right on Voigt throughout the 10 laps, but Voigt held on the lead the top three to the checkered flag. Steve Sheppard Jr. was a distant fourth.

Polesitter Jason Feger pressured him much of the way, but outside front-row starter Shannon Babb jumped into the lead and led all 10 laps. Feger was second followed by Ryan Unzicker. Derek Chandler held the fourth spot at the white flag, but Donny Walden fought past him exiting turn four on the final lap to get the transfer spot, making contact on the way by. Chandler retaliated in turn two on the cool down lap, getting into Walden's quarter panel. Shane Tomlin spun twice between turns one and two to draw cautions.

Rodney Melvin won a two-car breakaway with polesitter Brandon Sheppard for his series-leading 11th heat race victory. Don O'Neal was a distant third with Frank Heckenast Jr. fourth in the caution-free event. Adam Mefford pressured Heckenast for the last spot on the last lap, but fell a few lengths short. Jason McBride pulled to the infield on the first lap.

Polesitter Dennis Erb Jr. led all the way on the tight-cornered track, cruising to a caution-free victory. Dustin Linville was second ahead of Mark Burgtorf while fifth-starting Kevin Weaver for the fourth and final transfer spot. Front-row starter Jeep Van Wormer struggled bady and missed transferring.

Two-time and reigning series champion Dennis Erb Jr. of Carpentersville, Ill., was the fastest overall among 33 cars Tuesday at Shepp's Speedway, setting fast time for the first time on the series. Erb's lap of 12.015 seconds puts him on the pole position for the first heat race on the 20th leg of the series. Other drivers topping qualifying groups to earn poles for heat races: Brandon Sheppard (12.052) of New Berlin, Ill.; Jason Feger (12.015) of Bloomington, Ill.; and Terry Casey (12.066) of New London, Wis. Four heat races will send four drivers apiece to the main event. The B-Main sends two drivers to the main event. Three provisional starters round out the 21-car field for the 40-lap feature paying $6,000 to the winner.

The series begin the home stretch at Shepp's with the last week of the tour. Five more races remain on the series with Randy Korte of Highland, Ill., and reigning champion Dennis Erb Jr. of Carpentersville, Ill., locked in a tight battle for the $25,000 championships. ... The first-year Shepp's oval appears to be smaller than a quarter-mile, the smallest on the circuit except for Macon (Ill.) Speedway and Belle-Clair Speedway in Belleville, Ill. ... The track is owned by the family of Summernationals regulars Steve Sheppard Jr. and his 16-year-old son Brandon Sheppard. ... Modified ace Jeff Leka of Buffalo, Ill., is subbing in the No. F15 driven previously on the series by Jeremy Conaway of Springfield, Ill. .... Former Summernationals champion Don O'Neal of Martinsville, Ind., is making his first series start of 2009 in the No. 16c driven earlier on the series by Justin Rattliff of Campbellsville, Ky. ... Shepp's normally runs Sundays, but a Friday night program is scheduled this week including UMP Late Models. ... Ed Bauman, a two-time winner of Macon's UMP Summernationals event, serves as the race director at Shepp's.