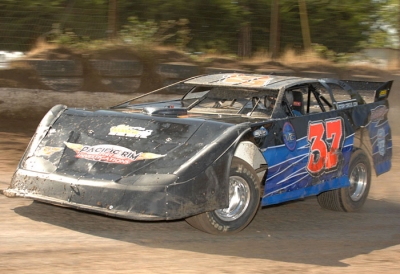 LEBANON, Ore. (July 4) — Reigning series champion Rob Mayea of Bend, Ore., won Saturday's middle leg of the Fourth of July weekend tripleheader on the Northwest I-5 DIRTcar Late Model Tour at Willamette Speedway. The seventh-starting Mayea made a high-side pass on Cody Sell of Brownsville, Ore., with about 15 laps remaining en route to the $1,500 victory, his series-leading 10th in tour history. | Slideshow

Sell, the fast qualifying on a hot night with temperatures in the upper 90s, settled for second while John Duty of Portland, Ore., finished third. John Campos of Keizer, Ore., and Mike Miller of Springfield, Ore., rounded out the top five in a race slowed by three cautions.

Jeremy Shank of Salem, Ore., was scheduled to start on the pole, but broke a right-front lower control arm while packing the track after a lengthy track-watering session. He joined the race several laps down and ended up 18th.

Notes: Casey Vitale’s hauler caught fire in Roseburg, Ore., on his way home Friday night and burned to the ground. No one was injured. The team was able to get the truck unhooked, but the semi-trailer with all his racing equipment was a complete loss, including two cars. A shorted-out battery is the suspected cause. ... John Duty's third-place finish keeps him in the series points lead over Jeremy Shank. ... The first caution appeared on the 15th lap when a verge board above the wall in turn three fell onto the track surface. ... Another caution appeared when Brady Sell, Rick Wyatt, Justin Dittman and Todd Shandy were involved in a wreck that resulted in Sell and Dittman retiring. ...ï¿½ Clay Daly of Watsonville, Calif., was the hard charger with his 19th-to-ninth run. ... Among drivers failing to make the feature: Randy Boyd, Rob Campos, Randy Neal and Brett McCutcheon, who was running in a transfer position in the B-Main when he broke a right-rear shock mount.