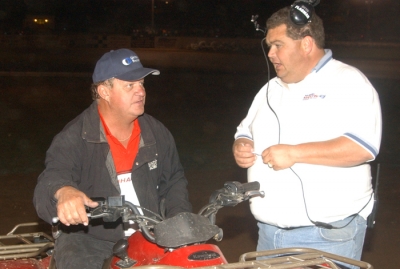 A new Missouri-based series, started by a self-described "die-hard Late Model guy," will launch in 2008 with most of its races at Monett Speedway and I-44 Speedway in Lebanon. Dirt LateModel Racing Association founder Randy Mooneyham, who promotes both tracks, said plans are for a 15-race series for open-competition Late Models with races paying at least $2,000 to the winner.

For the 55-year-old Mooneyham, who has nearly 30 years of experience in race promoting, the DLRA will be his second time around promoting a series. Along with partner Ken Essary, Mooneyham founded the Midwest LateModel Racing Association in 1989 before selling out in the mid-1990s.

Allstate Insurance will help provide a bulk of the points fund, Mooneyham said, but specific payouts for the point fund won't be disclosed until he's completed his sponsorship search.

Mooneyham hosted a meeting about DLRA on Oct. 3 in his hometown of Republic, Mo., just southwest of Springfield, that drew about 20 drivers and some potential sponsors. Mooneyham said attendees included Missouri drivers Brad Looney, Will Vaught and Shane Essary as well as Kansas driver Gary Gorby.

Using his two tracks as an anchor for the series, Mooneyham has long-term plans of developing a tour that could also run in northern Arkansas along with eastern Kansas and eastern Oklahoma. He declined to mention other tracks that could potentially host DLRA events but plans at least 15 events for 2008. Information for the series will be posted at www.dlra.net.

"I have an advantage because I have two tracks and automatically have 10 to 12 dates right off the bat," he said. "We're blessed right in my area. We run open Late Models weekly and we have a lot of cars. ... it seems like when we book the other series, the provisionals go to (touring cars), and our guys are out of luck."

The minimum DLRA purse pays $2,000 to the winner and at least $450 to every starter. Some races will pay more, Mooneyham said, including the $10,000-to-win Larry Phillips Memorial at I-44 Speedway on Labor Day weekend. That race and possibly others will be co-sanctioned by the existing Mid-America Racing Series (MARS), Mooneyham said.

"I think we'll be successful. ... We plan on co-sanctioning some (races) with the MARS series until we get started, but I definitely think the DLRA can carry its own weight. It should be a fun year, hopefully."

Justin Fegers of Mound, Minn., heads into the final World Dirt Racing League weekend with a 74-point lead on John Kaanta in the series points standings. Fegers, Kaanta and third-place Eric Pember will battle it out on Oct. 5-6 at Davenport (Iowa) Speedway.

Brian Harris of Davenport led WDRL points most of the season but missed the last two series events after being seriously injured in a Sept. 22 racing accident in West Liberty, Iowa. Harris was released from his rehabilitation stint at Genesis West Hospital on Oct. 2 and is recovering at home after suffering a severe concussion and a hairline crack on a vertebrae. — From series reports

The $50,000-to-win USA Nationals at Cedar Lake Speedway in New Richmond, Wis., will be held on July 31-Aug. 2 in 2008, a week earlier than the previously announced dates. The track made the change to stay in line with other major events scheduled for 2008, promoter Bob Kaufman said. — From track reports