McDowell outruns Owens for $10,000 at Volunteer 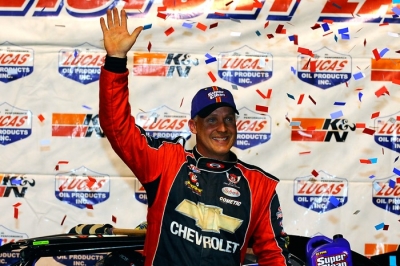 BULLS GAP, Tenn. (July 4) — It didn't take long for Dale McDowell to give new sponsor Cheerios a little bang for the buck. Leading all the way in the Reece Monument 60 at Volunteer Speedway, the Rossville, Ga., driver captured his second Lucas Oil Late Model Dirt Series victory of the season. | Slideshow

"Everyone is so equal here, with the way the racetrack is shaped and the traffic played such a role," said polesitting McDowell, who earned $10,000. "We've been on top of things all night long. As long as I could keep the lapped cars between us I knew it would be tough for him (Owens) to pass me."

Owens chased McDowell over the final 50 laps in finish second while 10th-starting Don O'Neal of Martinsville, Ind., was third. Series points leader Scott Bloomquist of Mooresburg, Tenn., was fourth and Earl Pearson Jr. of Jacksonville, Fla., charged from his 23rd starting spot as a provisional to round out the top five in a race with four caution flags.

At the outset, McDowell beat fellow front-row starter Chris Madden of Gray Court, S.C., into turn one with Owens chasing the top two along with Jeff Maupin and David Breazeale. The fourth-starting Bloomquist lost three spots when he banged the turn-two wall on the first lap.

The frontrunners were working lapped traffic after just eight laps, and a lap-10 yellow appeared when Madden tangled with Ricky Arms. Knocked from contention, Madden showed displeasure with Arms during the caution period, feeling Arms didn't give him enough room.

After another quick yellow for Mark Douglas, McDowell led Owens, Maupin, O'Neal and Breazeale through six laps before Kerry Jones spun in turn one to draw a lap-16 yellow.

Thereafter, McDowell clicked off consistent lap after consistent lap while Owens turned up the heat by the halfway point. As the leader worked through slower cars, Owens did his best to pull alongside, but never could quite overtake McDowell.

A lap-49 caution for Ray Cook bunched the field for an 11-lap dash to the finish, and Maupin gave up third place under the yellow flag with fuel-pressure problems.

With clear track, McDowell kept Owens at bay and raced to his third career series victory.