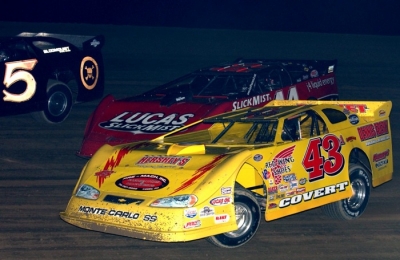 Jason Covert (43A) looks to grab the lead at Muskingum. (rickschwalliephotos.com)

"I can't believe I finally won a Lucas Oil race," Covert said in victory lane. "I've dreamt about this for a long time, the type of drivers who were here tonight, man I don't know what to say except I wish my dad was here to see this.

"I want to thank my car owner Barry Klinedinst, my crew, Robby Allen, American Racer Tires and Rocket Chassis. Everything was exceptional tonight and thanks to the fans for coming here to watch us race, I don't race for a living, we don't get to travel a lot, so that's why it's satisfying to win this race here tonight."

Eric Jacobsen of Seacliff Beach, Calif., led two laps before Covert stormed into the lead, quickly stretching his margin while Jacobsen battled four-time series champion Earl Pearson Jr. of Jacksonville, Fla., for the second spot. After a pair of cautions on laps 12 and 13, Covert built a commanding lead until Tim Dohm drew a lap-23 yellow, bunching the field. The red flag appeared when the lights went out in turn two, that that merely delayed Covert's dominating.

Restarting ahead of Jacobsen, fast qualifier Josh Richards of Shinnston, W.Va., Pearson and Steve Casebolt of Richmond, Ind., Covert again pulled away while Richards and Pearson dropped Jacobsen back to fourth.

Covert smoothly worked lapped traffic through the final stages, putting several cars between his No. 43A and Richards in the second half of the race. Clean racetrack the final three laps allowed Covert to dash to the finish and become the fifth winner in five Lucas Oil visits to the 4/10-mile oval.

Richards held off Pearson for second with Jacobsen fourth ahead of Donnie Moran of nearby Dresden, who rallied from 20th to earn the PBM-Erson Cams Hard Charger honors.

Notes: Covert's Barry Klinedinst-owned Rocket Chassis is sponsored by Red Wing Shoes, VP Racing Fuels, Bam's Auto Center, Pre-Mach Inc. Fabricators and Machining, Dennis Eberly Building and Remodeling and Kuppy's Diner. ... Series points leader Scott Bloomquist of Mooresburg, Tenn., finished 11th but still has a 325-point margin over second-place Dale McDowell of Rossville, Ga., who was ninth. ... The series heads to Tennessee for the rest of the weekend with a Saturday event at Volunteer Speedway in Bulls Gap and a Sunday event at Tazewell Speedway.