Gopher 50 winners can double their earnings 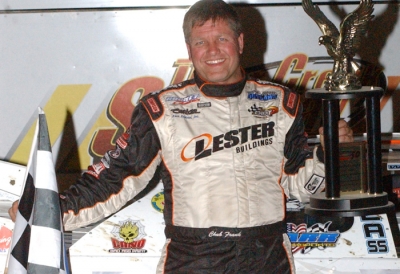 Deer Creek Speedway and the Blooming Prairie (Minn.) Lions Club wanted to make the milestone 30th annual NAPA Gopher 50 charity race a truly memorable show. With a unique promotion that headlines the 17 former Gopher 50 winners, gives fans a shot at a cash prize and could bring one driver a whopping $20,000 payday, the co-promoters of the historic event have fulfilled their desires.

To celebrate the 30th edition of the Gopher 50 on July 8, at the Queensland family's Deer Creek oval, all previous winners of the race are eligible to compete for lucrative bonus money as part of the Past Champions Challenge. A victory in the World of Outlaws Late Model Series event by a former Gopher winner will earn that driver an additional $10,000 on top of the posted 10-grand first-place prize — and making the night even more intriguing, several drivers who haven't won the race will be picked to run for the $10,000 bonus by inactive Gopher 50 winners, who stand to collect a $1,000 check if their stand-in selection bags the checkered flag.

All the evening's action will be taped by the Speed cameras for broadcast Aug. 15=on the cable network.

“We were coming home from a meeting with NAPA when we came up with this idea to market the 30th annual Gopher 50,” said Ryan Queensland, public relations and marketing director of Deer Creek Speedway. “It's something different that we hoped would bring the former winners back and it looks like it's really gone over great.

“Pre-race ticket sales have been strong and the buzz around here from fans and racers has been unbelievable. Now we just need a sunny, 80-degree day and we'll rock the house.”

Part of the WoO tour for the fifth consecutive year, the Gopher 50 was founded in 1980 as a fundraiser for the Blooming Prairie Jaycees. It was held that year at Chateau Speedway in Austin, Minn., and offered a $3,000 top prize from a $12,000 purse.

sThe event was moved to the Steele County Fairgrounds in Owatanna, Minn., in 1982 and ran there until settling at the gorgeous, 3/8-mile Deer Creek Speedway in 2005, the same year that the Blooming Prairie Lions Club assumed promotion of the event. In excess of $300,000 has been raised for Jaycee and Lions projects over the lifetime of the Gopher 50.

“I can't believe it's already been 30 years for the Gopher,” said Jerry Ingvalson, the Blooming Prairie Lions Club member who has overseen all aspects of the event since its inception in 1980. “When we started this race we didn't know if we'd make it through the first year. Nobody would have thought the race would get this large to where it's on national television.”

Ingvalson has sought to contact all of the former Gopher 50 winners to extend them invitations to Wednesday night's event. He expects more than half of them to on hand.

Ingvalson said several former winners who are no longer active behind the wheel of a Dirt Late Model have confirmed their plans to attend the 30th annual event, including inaugural Gopher 50 winner Leon Plank, a Wisconsin native who now lives in Marco Island, Fla.; three-time winner Steve Kosiski of Omaha, Neb.; Tom Steuding of Altoona, Wis., who topped the 1986 event; and three-time victor Willy Kraft, a Minnesota native who now makes his home in Mico, Texas.

Those inactive drivers will have a big decision to make when they're introduced to the crowd prior to the start of Wednesday's racing program. They'll be asked to select a driver who hasn't won the Gopher 50 to go for the $10,000 bonus in their stead.

Will they pick Josh Richards of Shinnston, W.Va., the 21-year-old sensation who leads the WoO LMS points standings? Or Steve Francis of Ashland, Ky., a former WoO LMS champ and five-time winner on this year's tour? Or Clint Smith of Senoia, Ga., who won a WoO show at Deer Creek in 2006? Or Shane Clanton of Locust Grove, Ga., who finished fourth in last year's Gopher 50? Or Tim Fuller of Watertown, N.Y., whose three career WoO LMS victories have all come at tracks in the Upper Midwest? Or Brady Smith of Solon Springs, Wis., an impressive new tour regular who has enjoyed success at Deer Creek in the past?

Or will they pick '06 series champion Tim McCreadie of Watertown, N.Y., who tentatively plans to enter the event? Or Jimmy Mars of Menomonie, Wis., who is coming off a $30,000-plus victory in the Firecracker 100 at Pennsylvania's Lernerville Speedway and has known Plank and Steuding for years?

You can bet the former winners making the picks will receive plenty of overtures from contenders hoping for a chance to chase that extra cash.

“We've invited all the former winners to our pre-race feed on Wednesday afternoon,” said Queensland, referring to the annual Windsor Chops lunch that is provided to the teams prior to the Gopher 50 at Deer Creek. “I have a feeling that the drivers who want to race for that $10,000 bonus will be doing so$20,me politicking while they're eating.”

Fans will also have a chance to share in the bonus money by registering for a special contest at participating NAPA Auto Parts Stores in the area or Miner's Outdoor Rec in Blooming Prairie, Minn. On race night, names will be drawn to pair fans with the drivers who will be seeking the $10,000 Past Champions Bonus — and if a lucky fan's driver wins the Gopher 50, they'll take home a $2,000 check.