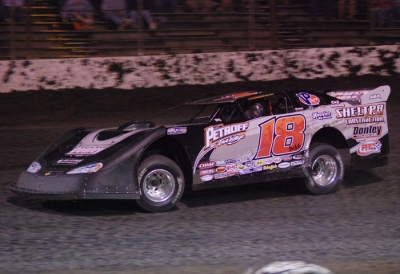 MACON, Ill. (July 2) — There's nothing like a little home-track love to get a driver back on track. Struggling through one of his longest winning stretches on the UMP DIRTcar Summernationals, Shannon Babb received the arm-raising cheers and raucous applause from Macon Speedway fans in victory lane after capturing the Herald & Review 100, the 17th leg of the tour. | Slideshow | Complete Summernationals coverage

Fans came alive when Babb zipped into the lead with a low-groove pass of Rodney Melvin in turn three on the 20th lap. They lifted fists in joy when he took the checkered flag at the tiny fifth-mile, black-dirt oval. And then they swarmed him in the pits seeking hugs, autographs and the chance to rub elbows the second-winningest driver in Summernationals history.

"It's cool. We've got a lot of good fans that come out to these Midwestern racetracks, especially Macon," said Babb, who grew up north of Macon in Decatur and lives just south of the track in Moweaqua. "It's pretty awesome here."

Once Babb was out front, there was no catching the No. 18 as the top five spots were swapped throughout most of the race. Jason Feger of Bloomington, Ill., got the closest just before the halfway point, but Babb stretched that margin to a full-straightaway by lap 60. By the time Brian Shirley of Chatham, Ill., was up to second on lap 80, Babb had nearly a half-track lead.

Polesitter Brandon Sheppard's lap-82 caution erased that, and Feger's chances were over when a flat forced him into a spin on the restart. But Shirley couldn't keep up over the final 18 laps as Babb raced to his $6,000 payday and a raucous victory lane with hugs aplenty from father Greg, crew member Dave Hoff, along with a winning kiss from wife Emalie.

Shirley was second for his best Summernationals finish of 2009 while outside front-row starter Rodney Melvin of Benton, Ill., survived a lap-26 scrape with Steve Sheppard Jr. for a third-place finish. The two frontrunners in series points, second-place Dennis Erb Jr. of Carpentersville, Ill., and leader Randy Korte of Highland, Ill., rallied from deep in the pack for top-five finishes. Erb came from 19th to fourth and edged closer in the points chase to Korte, who started 17th and finished fifth.

Babb, who split from North Carolina-based car owner Clint Bowyer of NASCAR fame to run his own team in 2009 with support from Sheltra Motorsports, dominated the Summernationals with 28 victories while racing to titles in 2005-06. He hasn't run the series full-time again in '09, but his 16-race winless streak was his longest was a series regular since 2003.

"It was definitely special," said the 35-year-old Babb, six times a fast-qualifier on the tour but never a winner until Macon. "I've been really down and out and going good, qualifying good, but just can't get anything done in the feature. Tonight, I really didn't feel like we were going to win the thing.

"I knew (in Summernationals past) when we were winning that we had all our ducks in a row. Putting this new deal together this year, we've just been a little far behind on having everything exactly perfect. I didn't get upset. I just knew that we were going to get it sooner or later. It was just going to take me a little bit longer than normal."

Babb didn't want to take too long in getting to the front at Macon, though, a small track where event contending cars can find themselves a lap down in a hurry.

Melvin led early over Shirley, Babb, Steve Sheppard and Jayme Zidar, but a lap-17 caution bunched the field when Jason Cleaver's car stopped on the frontstretch and collected sixth-running Mark Voigt. Babb went to work on the restart, pouncing with a low-side move on Melvin a few laps later in turn three.

"I knew I needed to get to the front because (the track surface) was polishing up and getting slicker in a hurry, and it was going to be tough," Babb said. "You just gotta take 'em as you get 'em, because they're not easy to get any more."

Babb's 56th career series victory left him sixth in series points, and it'll take more checkered flags to make up the 134 points on the series-leading Korte. His Herald & Review 100 victory was his second, matching his 2006 triumph.

While scores of fans and well-wishers came to see Babb in the pits, he thanked crew members Jay Hunt and Ed Cutler, along with Hoff, helping during the Summernationals. He also thanked Rocket Chassis for supporting him in his first series trek in that type of car. He joked that his crew members were the only ones who wanted to be seen with him during his winless drought.

Dennis Erb Jr. gets the series provisional while Wes Steidinger gets the provisional based on '08 UMP points. Chris Dick gets the track provisional. The modified feature was completed at 9:15 p.m. with the Late Model feature the only remaining event on the program.

Fourth-starting Randy Korte took the lead heading for the white flag and took the victory while Terry Babb, reinstated to his position despite spinning in turn four on the 10th lap, finished second ahead of Dennis Erb Jr. Babb battled with Scott Schmitt early and eventually took control of the race while Korte and Erb moved up to challenge midway through the 12-lapper. Just as Korte took the lead, Babb and Erb rubbed together exiting turn four with Babb spinning to a stop. He was restored to the second spot and took second after the white-flag restart. Erb is in line for a provisional in the main event. Two early pileups delayed the race several minutes. Wes Steidinger and Dennis Vandermeersch hooked up between turns three and four in a wreck that involved six other cars, then Kenny Carmichael and Mike Durbin Jr. tangled in turn one. Both wrecks took several minutes to pry the cars apart.

Polesitter Tim Lance grabbed the early lead and cruised to a victory in the caution-free prelim. Third-starting Rusty Schlenk got past outside front-row starter Kyle Logue early, then fought off challenges from Logue throughout the race. Russ Adams got the fourth and final transfer spot for his first feature transfer of the Summernationals.

Outside front-row starter Rodney Melvin got the jump on polesitter Shannon Babb and raced to a 10-lap victory. Melvin led comfortable through the first half of the race, but after lap-seven caution for Kenny Carmichael Jr.'s smoking car, Babb was all over Melvin until the checkered flag. Second-row starters Mark Voigt and Roger Brickler got the other two transfer spots while two-time Summernationals champion Dennis Erb Jr. finished sixth behind Scott Schmitt.

Brandon Sheppard outdueled his father and polesitter Steve Sheppard Jr. for the victory, while third-starting Ryan Unzicker was fast but twice ran into trouble. The 16-year-old Sheppard and father Steve got the top two spots with Jason Feger third and Jason Cleaver getting the fourth and final spot in his first Summernationals start of '09. Unzicker worked his way into second on the seventh lap, but he got together with the elder Sheppard in turn two and stopped against the wall. On the restart, Unzicker was trying to rally from the tail when he got the worst of a four-car pileup between turns one and two.

Track favorite Shannon Babb of Moweaqua, Ill., topped 34 qualifiers Thursday at Macon Speedway for the Herald & Review 100, the 17th stop on the UMP DIRTcar Summernationals. The 35-year-old Babb posted a lap of 10.406 seconds at the fifth-mile oval where he raced as a youngster. Babb, who set fast time for the fourth straight night and sixth time on the series, was just off Kyle Logue's track record of 10.311 seconds.

Randy Korte has 1,025 points to lead Dennis Erb Jr. (1,006) and Jason Feger (950) after 16 series events. ... Twelve drivers have perfect series attendance, but Duane Chamberlain of Richmond, Ind., who had missed a single event in East Moline, Ill., headed home after arriving at Macon this afternoon. The team broke a motor warming it up. They had also had problems with the tires on the team hauler, UMP officials said. ... Need a history of the Herald & Review 100? Check out the extensive Wikipedia page. ... Four-time race winner Kevin Weaver won last year's event. ... Roger Brickler of Springfield, Ill., won Saturday's regular-season feature at Macon. He's got his 2008 MasterSbilt Race Car dialed in after making some front-end changes with parts sent from the MasterSbilt shop in Crothersville, Ind. "I just want to make the show tonight," Brickler said. "There's a lot of big boys here. It ain't like it was last week."