Van Wormer leads all the way, wins at Highland 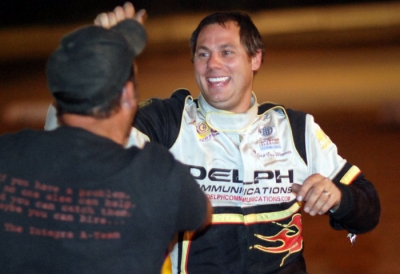 HIGHLAND, Ill. (July 1) — Jeep Van Wormer's hot-and-cold run in the UMP DIRTcar Summernationals is at its hottest following Wednesday's victory at Highland Speedway in the 16th leg of the month-long tour. The 34-year-old Pinconning, Mich., driver has spread three victories throughout the circuit — winning the June 11 opener in Brownstown, Ind., and on June 20 at Tri-State Speedway in Haubstadt, Ind. — but he hopes the Highland victory bodes well for the final stretch of the tour. | Highland postrace notebook | Complete Summernationals coverage | Slideshow of Sheppard-Erb fracas

"It's kind of one of those hero-to-zero things," the polesitting Van Wormer said after leading all 40 laps at Highland's quarter-mile oval. "I think this is the best we've finished in a two-night stint, second last night (in Peoria, Ill.) and winning tonight. So I'm hoping we can build the momentum and not go to zero tomorrow ... it seems to be our motto. We win one night and the next night (we struggle).

"I'm hoping we can build on this and move to the next one and get to those $10,000s at the end of the week, and maybe be in contention for one of those wins."

Van Wormer started on the pole and built leads of nearly a straightaway in racing to the $6,000 victory, the 11th of his career on the Summernationals. Runner-up Mark Faust, a hometown driver who posted his best-ever series finish, drew closer late in the race but never made a serious bid for the lead. Mark Voigt of nearby Marine, Ill., started outside the front row and slipped back early before regaining third from Rodney Melvin of Benton, Ill., in the closing laps.

Dennis Erb Jr. of Carpentersville, Ill., advanced from eighth to fifth to nibble into the points lead of sixth-finishing Randy Korte of Highland, who scrambled from the tail with a provisional starting spot after replacing his car's rear end.

Faust struggled as his softer compound tires began giving up late in the race, and he battled the pain from a bent wrist brace that was hurting after he clipped an infield tire. But the two-time UMP weekly points champion was glad to defend his home turf with a second-place finish.

"Anytime you can beat this field of cars — any of these cars — you've done good. They're all good. There's no slouches in the bunch," said Faust, who faced some pressure from Melvin in the second half of the race. "I saw Rodney was coming up on me. I just had to kind of regroup again. I was pushing too hard, trying to push harder, instead of thinking what I was supposed to be doing. .. After I sort of got back with myself, we started doing a little better then."

Voigt hoped his choice of the hardest tire compound on all four corners might carry him to victory, but they didn't fire as quickly as he'd have hoped.

"I figured we'd have at least one or two cautions in there and it went green-to-checkered and that kind of hurt us a little bit early," Voigt said. "We fell back, but at the end we were coming pretty hard. I'd like to have had a caution with about 10 to go, or to make it 50 laps would've been nice."

Erb's fifth-place performance didn't draw as much attention as his heat race run, when he was involved in a wild frontstretch fracas. After Erb and Steve Sheppard Jr.'s cars banged together on the frontstretch, ripping the left-rear wheel off Sheppard's car, an angry Sheppard climbed out and stomped down the frontstretch, eventually stair-stepping up the nosepiece and hood of Erb's car before falling on the car's roof, reaching in for Erb while track officials scrambled to stop him.

Officials subdued Sheppard as Erb pulled away, but Sheppard was disqualified for the night and put on probation for the remainder of the tour by series director Sam Driggers.

The feature cars are rolling onto the track about 9:25 p.m. The 40-lapper should begin soon.

Randy Korte got the series provisional, Michael Kloos got the provisional based on '08 weekly UMP points, and Paul Bailey got the track provisional. Steve Sheppard Jr. was in line for the UMP provisional but officials parked him for night following his frontstretch fracas with Dennis Erb Jr.

Duane Chamberlain led all 12 laps to win the B-Main and transfer to the feature along with Jason Feger, who ran side-by-side with a high-running Paul Bailey for the first half of the race before securing the second spot. Mike Hammerle finished third with Bailey, who later moved to the low groove like most everyone else, was fourth ahead of Kevin Cole. The hornet consolation race is on the track and an intermission is scheduled before the Late Model feature.

Jeep Van Wormer will start on the pole of the main event after a draw among heat race winners. Mark Voigt starts outside the front row with Mark Faust and Shannon Babb in the second row. Series points leader Randy Korte, who scratched from his heat race, took a lap in the C-Main to assure himself a provisional for the feature. Track officials previously reported engine problems with his No. 00, but Korte said he broke a rear end in his primary car and will run the rest of the night in a backup. Rick Salter won the C-Main.

Polesitter Jeep Van Wormer led all the way in a wild heat race punctuated by Steve Sheppard Jr. climbing from his car and jumping atop Dennis Erb Jr.'s No. 28. Sheppard's left-rear wheel came off in a fronstretch battle with Erb midway through the heat, and after his car came to a stop inside turn one, Sheppard stomped up the frontstretch and sprinted onto Erb's hood, falling onto the roof of the car and eventually twisting toward the cockpit and trying to grab Erb. Three track officials wrestled Sheppard to the ground. The race continued with Van Wormer winning over Erb and Chad Zobrist, while Steve Leach was the benefactor of an attrition-filled prelim to get the fourth and final transfer spot. Michael Kloos was running in a transfer spot but got into the frontstretch wall while battling with Erb in the final laps. Three starts were required to get the race rolling and two early cautions appeared, one for debris on the track and another to reset an infield tire barrier apparently moved during the previous heat.

Polesitter Shannon Babb roared away for an easy victory while the other three transfer spots were in doubt all the way. Ryan Unzicker finished in front of a four-car pack to finish second while a low-running Kevin Weaver got up to third at the finish. Outside front-row starter Frank Heckenast Jr. settled for the fourth and final transfer spot over Jason Feger, last night's winner at Peoria who will start in the second row of the B-Main.

Mark Faust, getting the pole position when series points leader Randy Korte didn't show up on the grid, overtook race-long leader Rusty Schlenk on the the last lap for a victory. Schlenk was second followed by two other transferring cars, Tim Manville and Rick Standridge, in the caution-free 10-lapper. A track official got word from the pits that Korte had engine problems. He was quickly unloading a backup car but couldn't get it ready in time to make the lineup.

Polesitter Mark Voigt led all the way in the caution-free 10-lapper, holding off fourth-starting Mark Voigt in a two-car breakaway. Outside front-row starter Donny Walden lost third to Brandon Sheppard midway through the heat, then spent the final laps fighting off Duane Chamberlain in a battle for the fourth and final transfer spot. Chamberlain got into Walden exiting turn four on the final lap, but Walden was able to straighten out and edge Chamberlain at the line.

Setting fast time for the series-leading fifth time, Shannon Babb of Moweaqua, Ill., topped 39 qualifiers at Highland Speedway for the 16th leg of the UMP DIRTcar Summernationals. Babb posted a time of 13.487 seconds at the quarter-mile oval to earn the pole position for the third heat race.

Check the series stats for updated points and statistics. Randy Korte leads with 965 points over Dennis Erb Jr. at 941. ... Late Models lost their chance to hot lap at Highland when the first group failed to heed the call to the track (to be fair, Matt Weidner did arrive; he wasn't allowed on the track); drivers in the succeeding groups complained they shouldn't have been penalized. ... Series director Sam Driggers has deemed Peoria's finish official after a check to make sure Dennis Erb Jr. wasn't a lap down. Erb pitted for repairs after the second of four starts before a lap was completed, missing the third start altogether. He returned to start on the tail of the fourth start and finished seventh. Some drivers complained Erb should've been penalized for returning to his pit area instead of the hot pits near the track, but Driggers said drivers are allowed to go to their pit area but lose their two-lap courtesy for changing flats.