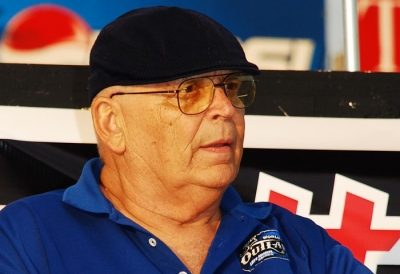 A special ceremony at Lernerville Speedway following June 27's Firecracker 100 draw for positions honored Walter Burson, the World of Outlaws Late Model Series technical director from 2004 until his diagnosis with cancer forced him off the road earlier this season.

A well-known figure in Dirt Late Model racing for decades, Burson became the second recipient of a WoO Lifetime Achievement Award, joining car owner Raye Vest (2007). Series director Tim Christman and race director Bret Emrick, who previously worked with Burson on the STARS Renegade DirtCar Series, made the presentation to Burson at the Sarver, Pa., track, and members of all the regular WoO teams joined Burson for a photo.

Making his first visit to a WoO event since beginning cancer treatments four months ago, Burson was in good spirits while making the rounds of the pit area. He was also his usual rough, tough self.

Said Christman, “He told me, ‘You better not have any surprises planned – because if you do, I'm either gonna start crying and hug you or kick your ass.' ”

Other series notes following the Firecracker 100 and recent happenings from the 10-day Great Northern Tour swing with the series:

What a week for Richards

No driver had a better Great Northern Tour than Josh Richards, the 21-year-old sensation who caught fire during the swing.

Richards won four of the seven events, scoring back-to-back victories twice (a Canadian double on June 18 at Ohsweken Speedway and June 21 at Cornwall Motor Speedway, and June 24 at Pennsylvania's Big Diamond Raceway and June 25 at Lernerville) and never finishing worse than 11th (on June 23 at New York's Canandaigua Speedway).

Ranked third in the WoO standings entering the Great Northern Tour, Richards ended it as the points leader by six points over previous leader Steve Francis. He knows what it will take to stay on top of the standings during the season's second half.

“Everybody's gotta do their part,” Richards said, “from the guy who's maintaining the car and looking over everything to the guy who's doing the tires on the car to me as far as doing the driving on the track. Everything just has to go together — and then you need some luck. If you don't have luck, you just can't win.”

While Steve Francis failed to capture a Great Northern Tour victory for the second consecutive year after riding a two-race win streak into the swing, he did fare much better than he had in '08 (he called that frustrating trip his “worst ever”) and had his spirits raised by a nugget of personal off-track news he happily shared.

Just before the recent $100,000 Dirt Late Model Dream event at Ohio's Eldora Speedway, Francis became engaged to Amanda Ferrell, whose parents promote Bluegrass Speedway in Bardstown, Ky. Francis said he and Ferrell are tentatively planning their wedding for a weekend just after next February's racing activities in Florida.

Driver Shane Clanton of Locust Grove, Ga., sported a black right eye throughout the Great Northern Tour after an apparent clod of clay hit the front of his helmet on the 10th lap of the swing's opening event on June 18 at Ohsweken.

Running fourth at the time, Clanton absorbed the hard blow and immediately spun off turn four. He was hit by Clint Smith and needed a few moments to collect himself after coming to rest.

“I wasn't knocked out,” said Clanton, “but I was knocked silly.”

The incident was the start of an unspectacular trip for Clanton, whose lone top-five finish was a fifth in the held-over feature on June 25 at Lernerville. After beginning the tour 46 points out of the WoO LMS lead (in fourth place), he headed home ranked fifth facing a hefty 112-point deficit.

It was hard to top the electricity that was in the air on June 22 for the first-ever WoO event at Can-Am Motorsports Park in LaFargeville, N.Y., which drew a standing-room-only crowd that locals called the track's largest since the late ‘80s.

Many fans, of course, came to see local hero Tim McCreadie, the 2006 WoO LMS champion from nearby Watertown, N.Y. The crowd went wild when McCreadie and his father, DIRTcar big-block Modified legend "Barefoot" Bob McCreadie, were the last drivers to walk off a bus that brought the entire starting field to the homestretch for pre-race introductions; Timmy started from the pole position, while Bob, who hasn't raced since suffering a broken leg and other injuries in a 2005 motorcycle accident, was the event's grand marshal and waved the green flag.

Alas, T-Mac couldn't provide his faithful a storybook victory. He finished second to Rick Eckert, who praised the sweeping half-mile oval operated by brothers Billy and Charlie Caprara (who also made it clear that they want a return engagement for the series in 2010).

“The racetrack's beautiful,” said Eckert. “It's a big, huge place. Man, there were so many lanes. I'd have bet big money at the start of the night that it would've rubbered, but that wasn't the case. That track crew worked hard on the surface all day, watering it and watering it because it was windy, and all that work paid off.”

A week with the Outlaws

Several regional drivers got a taste of life on the road with the WoO by following the Great Northern Tour, including:

Austin Hubbard: The 17-year-old from Seaford, Del., continued his breakout campaign, emerging as a serious contender virtually every night of the swing with noted mechanic Robby Allen overseeing his assault. A fifth-place finish at Cornwall was his top run, but he led the opener at Ohsweken until his car's motor expired and he ran as high as third on June 25 at Lernerville before another broken powerplant eliminated him, the type of performances that give legs to his desire to chase the WoO rookie crown in 2010.

Gregg Satterlee: Another up-and-comer who is contemplating the possibility of making a play for 2010 rookie honors, the 24-year-old from Rochester Mills, Pa., showed some grit and determination on the Great Northern Tour. His involvement in Clanton's crash at Ohsweken forced him to return home to make repairs, but he hooked back up with the tour at Cornwall (he would have missed the June 20 event at Quebec's Autodrome Drummond had it not been rained out) and ran the remainder of the swing. A ninth-place run at Canandaigua was his top finish.

Tony Knowles: Yet another driver with hopes of someday following the WoO LMS, the 21-year-old hauled north from Tyrone, Ga., to follow the Great Northern Tour for the second consecutive year. He entered every event except those at Lernerville, with a sixth-place run at Ohsweken the best of his three top-10 finishes.

Dan Stone: A memorable WoO LMS winner in 2007 at Tri-City Speedway in Franklin, Pa., the Thompson, Pa., racer trekked to Canada with the series for the third consecutive year and continued on to enter all the remaining Great Northern Tour shows. A fifth-place finish at Ohsweken was his best outing.

Matt Lux: Though some bad breaks prevented the 34-year-old from Franklin, N.Y., from registering a top-10 finish while entering every event on the swing, he missed just one A-Main (the opener at Ohsweken after a heat-race tangle) and didn't finish worse than 15th. He topped his week off by scoring a lead-lap finish of 13th in the Firecracker 100.

April Farmer: The 29-year-old from Livingston, Tenn., was a surprise participant in the entire swing, making the long trip in hopes of becoming the first-ever female to start a WoO feature. She failed to crack a feature lineup, but she came close, most notably at Can-Am, where she seemed to be in control of the final transfer spot in a consolation race until a late caution flag caused her tires to seal up and left her a non-qualifier.

Greg Oakes: Missing only the Big Diamond show, the upstart dirt Late Model driver from Franklinville, N.Y., said he used his vacation days from work expressly to follow the swing as a “learning experience.”

Mike Knight: The 22-year-old from Ripley, N.Y., was snake-bit by mechanical breakdowns throughout the swing, which he decided to follow just two weeks before the Great Northern Tour was set to begin.

No more bonuses for Mars

What did capturing the Firecracker 100 mean to Jimmy Mars? Well, the $30,950 in cash that he collected sure was nice, as was another crown-jewel victory for his resume. But there was something else.

“I don't get the Bonus Bucks anymore,” quipped Mars, feigning disappointment over his first career WoO victory making him ineligible for the $500 bonus that goes to the highest-finishing driver in every event who hasn't won a series event and isn't ranked among the top 12 in the points standings. “That was a long-running joke. I thought they were gonna have to make an amendment on that rule because I was collecting more $500 bonuses than anybody else.”

His close-but-no-cigar runs in WoO LMS competition ended with his Firecracker 100 triumph – which, by the way, earned Mars the Bonus Bucks cash for the final time.