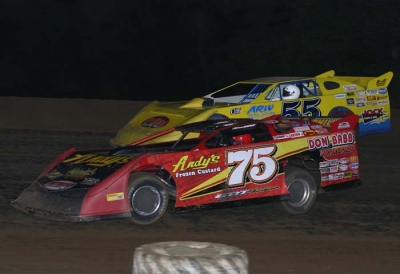 MONETT, Mo. (June 28) — Ken Essary may be in the National Dirt Late Model Hall of Fame, but at 63, he's not just sitting around in a rocking chair collecting honors for his impressive racing career. Still in the driver's seat, the Cape Fair, Mo., turned back 21 younger drivers Sunday at Monett Speedway for a victory in the co-sanctioned Showdown in the Heartland at the 3/8-mile oval in southwestern Missouri. | Slideshow

Essary earned $3,000 for the victory an the third event of the weekend co-sanctioned by two O'Reilly Auto Parts-sponsored tours, the MARS DIRTcar Series and National Championship Racing Association. The victory was Essary's first with MARS and first with NCRA since a previous series victory at Monett 23 years earlier.

Essary started on the pole of the 30-lapper with four-time MARS champion Terry Phillips of Springfield alongside. Essary led early, but two laps after a lap-four restart, Phillips moved underneath to take the lead. But during a lap-15 caution period after Jeremy Payne and Bill Koons got together exiting turn tour, Phillips pulled to the infield to change a flat right rear tire.

Essary was back out front with Turner and Kyle Berck of Marquette, Neb., in pursuit, but Berck cut down a tire and fell from contention. Essary kept Turner and Purkey in check the second half of the race and picked up the checkered flag.

Notes: Essary is sponsored by ARW Digital Balancing and Marty's Auto & Machine. ... Essary drove the No. 55 he normally uses in Race Brothers Show-Me Racin' Series events for Limited Late Models. Essary upgraded his spec engine with an open carburetor but his car had to weigh more (2,300 pounds vs. 2,200) and use a smaller rear spoiler (8 inches vs. 10) than in a Show-Me Racin' Series event. ... NCRA competitors join the July 2-4 Freedom Tour with races at I-80 Speedway in Greenwood, Neb., Park Jefferson (S.D.) Speedway and Adams County Speedway in Corning, Iowa. ... Next up for MARS is a July 10-11 weekend at Midway Speedway in Lebanon, Mo., and Springfield (Mo.) Raceway.