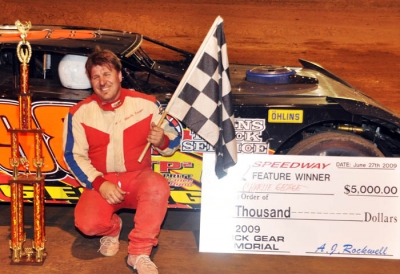 KERENS, W.Va. (June 27) — Charlie George of Elkins, W.Va., started outside the front row and led all 50 laps of the ninth annual Chuck Gear Memorial for the richest payday of his career. George earned $5,000 in the unsanctioned event as he outran Tim Dohm of Cross Lanes, W.Va., and former race winner Booper Bare of Rockbridge Baths, Va.

“My car was just super all night," said the 41-year-old George, in his third year of Super Late Model racing. "It was a little tight but over some of the bumps that seemed to help. All of those cautions helped me as I had on soft tires and it allowed them to cool off.”

The fifth-starting Dohm finished five lengths back in second with the third-starting Bare third at the 3/8-mile oval. Jared Hawkins of Fairmont, W.Va., was fourth and Tim Senic of Elkins rounded out the top five.

After a redraw among the first- and second-place drivers in the heats, Chuck Harper of Beverly, W.Va., and George started on the front row with George taking command early. Scott Peltz of Cadiz, Ohio, dropped out immediately when he lost a driveshaft.

With George out front early, Bare took second from Harper before a lap-six caution as Skip Hare and Billy Holbert got together in turn two, knocking Holbert's left-rear wheel off. Harper slowed on the restart to draw another yellow, and when the race resumed, George led Bare and Dohm back to the green.

Dohm took second from Bare on the 11th lap, just after fast qualifier Rick Williams headed pitside. Another caution appeared on the 16th lap when Bob Gordon coasted to a stop in turn three. Robbie Scott retired during the caution period.

George maintained his lead through the race's middle stages before Zack Dohm, the runner-up's son, spun in turn four to draw a lap-34 yellow.

Tim Dohm tried to make a move on George in the race's late stages, but George's smooth-handling car kept him with just enough cushion to stay comfortably ahead.

Notes: George's MasterSbilt Race Car has a Tom Rogers Racing Engine and sponsorship from Elkins Truck Service, King’s Run Engineering, Charlie’s Auto, Muffler Works and Tom Pritt Performance & Dyno.. .. George drove the only MasterSbilt in the field. ... He was also among the few drivers using American Racer tires. ... George's previous biggest victory came with a $2,000 victory at the Forest Festival at Elkins. ... Fourteen of 24 starters completed all 50 laps. ... Mike Benedum of Bristol, W.Va., was the hard charger with his 17th-to-eighth run. He gained four spots over the final 16 laps. ... Gary Dalton dropped out on the 39th lap with a flat right rear. ... Mechanical problems kept Steve Wilmoth out of action all night. ... The next special at Elkins is an Aug. 8 Fastrak touring event for Crate Late Models. The R.H. Armstrong Memorial is scheduled to pay $5,000 to the winner.