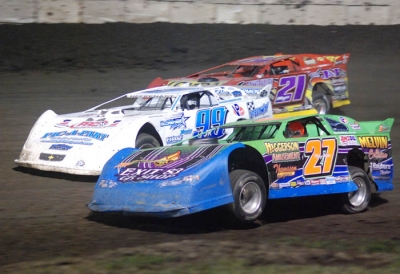 FAIRBURY, Ill. (June 27) — Billy Moyer beat the rain and beat his UMP DIRTcar Summernationals foes at Fairbury American Legion Speedway for his third straight series victory. Slipping under early leader Frank Heckenast Jr. on a lap-14 restart, Moyer cruised the rest of the 50-lapper for a $10,000 payday and his first three-race win streak on the series since 2001. | Slideshow | Complete Summernationals coverage

The six-time Summernationals champion from Batesville, Ark., earned his fifth series victory of 2009 and the series-leading 69th of his career as he followed Thursday's victory at Clayhill Motorsports Park in Atwood, Tenn., and Friday's victory at Paducah (Ky.) International Raceway.

The 21 starters were rushed to the racetrack by series and Fairbury officials with an impending storm signalled by darkening skies and lightning to the west, but in a race with just two cautions, Moyer had plenty of time to wrap up his sixth career Summernationals victory at a track where he's also won the season-ending Prairie Dirt Classic.

"It's always fun to come up here and run," the 51-year-old veteran said. "We had a pretty good car tonight and everything held together good. We had it just a little bit, a tick, tighter than my liking, but it worked for us

"I could run anywhere, but the fastest was right where I was running pretty much — the middle to the top," he added. "I could run that bottom, but it was faster up there where I was at."

Moyer dropped to the bottom to pass a few lapped cars, but the most critical time he dropped out of the high groove came on the lap-14 restart. With Heckenast, who started outside the front row, holding the high line, Moyer dropped under him entering turn three and pulled ahead entering turn four. The race was all but over after that.

"He just outdrove me, but what can I expect? It's Billy Moyer, you know? He's on a hot streak now," said the 20-year-old Heckenast of Orland Park, Ill., whose second-place finish paid him a career-high $5,000 and marked his best-ever Summernationals finish.

Heckenast fell back to third behind the low-running Kevin Weaver of Gibson City, Ill., just after losing the lead to Moyer, but he gathered his No. 99jr and soon regained the position from Weaver. A few times Heckenast got within a half-straightaway of Moyer, but the outcome was never in doubt.

"I saw I was starting to reel him in a little bit and I saw he was heavy in traffic, and I was hoping it would get a lot heavier so I could run down in there and try the bottom to see what happened. But I never got (close enough)," Heckenast said.

Moyer had a few tense moments when Jimmy Dehm's slower car briefly held him up between turns three and four near the midpoint of the race, and a few times when he got dangerously close to the wall, but he was firmly in control the final 36 laps.

"That ledge there is pretty wicked," Moyer said of traveling the high groove. "You can't drop your guard any at all, or that wall bites you. Everything worked out good for us."

Heckenast was second while Weaver, who led the series points before two straight 15th-place finishes at Clayhill and Paducah, was third. Two other top contenders for the $25,000 points title — Moyer has skipped four events and doesn't plan on running the entire tour — rounded out the top five with Dennis Erb Jr., of Carpentersville, Ill., fourth and series points leader Randy Korte of Highland, Ill., fifth after starting 10th. Polesitter Rodney Melvin of Benton, Ill., was running third early when he got hung up briefly against the turn-four wall and lost three spots. Melvin faded the rest of the way and finished a lap down in 16th.

The rain held off for Fairbury to complete the ensuing modified feature, but rain began falling during the sportsman main event. Two cautions slowed the Late Model feature, the first on lap five when Terry Casey got into the turn-one wall and the second on lap 14 when Scott James and Dehm mixed it up in turn two.

With track officials husting to try and beat oncoming rain, Jason Feger won the B-Main to transfer to the main event along with runner-up Joe Harlan, who made several near-passes in the low groove. The modified consolation race is on the track at 8:22 p.m. and the Late Model feature is next. Skies are darkening further and the wind is picking up, bringing cooler temperatures.

With the heat winners drawing for the top four spots in the main event, Rodney Melvin is on the pole with Frank Heckenast Jr. on the outside. Kevin Weaver and Billy Moyer, gunning for his third straight series victory, are on the second row. The track is in hurry-up mode with rain likely coming sooner rather than later. The B-Main rolled onto the track at 8:10 p.m.

Polesitter Billy Moyer cruised to an easy victory in the final heat, but Ryan Unzicker denied Arkansas a sweep of the top two spots by overtaking Bill Frye in the final laps. Frye settled for third while Shannon Babb was further back in the fourth and final transfer spot in the caution-free heat. Daren Friedman ran in the back most of the way and pulled in on the seventh lap; his car was towed to the pits.

Going to the high side to overtake polesitter Steve Sheppard Jr., fifth-starting Kevin Weaver took command on the eighth lap and grabbed a heat victory that was greeted warmly by the home-track crowd. Sheppard, who took command with outside front-row starter Scott James pulled into the infield on the fourth lap, was second followed by Donny Walden and Jimmy Dehm, who rebounded after losing several spots by getting into the turn-one wall on the second lap.

Polesitter Rodney Melvin went under race-long leader Brandon Sheppard on the eighth lap when the 16-year-old jumped the cushion and got into the wall exiting turn two. Sheppard got into the turn-one wall on the next lap and his hopes were over as Terry Casey, Randy Korte and Wes Steidinger all went by for feature transfer spots behind Melvin. Sheppard's car ended up in turn two and he was towed off the track. The only caution appeared on the sixth lap for debris in turn three.

Third-starting Frank Heckenast Jr. got under polesitter Jeep Van Wormer early to take command, then held off repeated low-groove charges from fifth-starting Dennis Erb Jr. for the victory. Van Wormer gathered his car up and stayed with the top two but settled for third while Brian Shirley ran a distant fourth in the caution-free prelim. Skies are darkening to the west with possible rain on the way.

Rebounding from a sub-par outing the previous night, Jeep Van Wormer of Pinconning, Mich., was the fastest of 34 qualifiers at Fairbury American Legion Speedway for the 12th leg of the UMP DIRTcar Summernationals. Van Wormer's lap of 12.85 seconds puts him on the pole of the first heat race.

The top four finishers from each of four heat races will advance to the 40-lap event, scheduled to pay $10,000 to the winner. Two drivers from the B-Main and three provisional starters will fill out the 21-car field.

Randy Korte of Highland, Ill., has yet to reach victory lane on the series, but his series-leading six top-five finishes have helped him grab the series points lead through 11 events. Dennis Erb Jr. of Carpentersville, Ill., and Kevin Weaver of Gibson City, Ill., have both taken turns atop the points but are now chasing Korte. ... Billy Moyer of Batesville, Ark., a five-time winner of Summernationals events at Fairbury, is looking for his third consecutive series victory after winning Thursday at Clayhill Motorsports Park in Atwood, Tenn., and Friday at Paducah (Ky.) International Raceway. ... The 34 cars is tied to the third lowest count of the series; last year's series event at Fairbury drew 48 cars. ... Steve Sheppard Jr. and son Brandon are back at Fairbury after leaving midway through Friday's event in Paducah, Ky. Father Steve had engine problems and Brandon hit the wall and damaged the rear of his car. ... Brutally hot weather in the middle '90s has abated somewhat at Fairbury, where its 91 degrees during hot laps and trees throughout the pits give teams some relief with cooling shade. ... A line of storms is entering northwestern Illinois, giving Fairbury a chance of rain later in the night, although it appears the worst of the storms would be north of the track. ... Will Vaught hit the turn-one wall hard in hot laps on his time-trial lap.