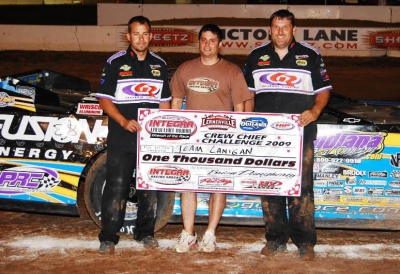 The six heat winners will redraw for the top-six starting positions in Saturday night's Firecracker 100, which tops off a full day of entertainment at Lernerville.

Former WoO LMS champion Tim McCreadie of Watertown, N.Y., meanwhile, barrel-rolled his car twice in a tangle off turn four during Friday's second heat. Making just his fifth start since returning last week from a back injury suffered in a Jan. 15 crash during the Chili Bowl Midget Nationals in Tulsa, Okla., McCreadie slid up the track when he hit a spot of water along the inside berm, made contact with Jared Miley of South Park, Pa., and then was hit by his Sweeteners Plus teammate Vic Coffey of Caledonia, N.Y.

The shove from Coffey sent McCreadie's car into a pair of flips. It came to rest on its wheels and McCreadie gingerly climbed out of the cockpit, sore but otherwise uninjured. He expects to drive his backup car on Saturday night in an attempt to qualify for the Firecracker 100.

Richards, 21, put his Seubert Calf Ranches Rocket machine back at the front of the pack 24 hours after winning the postponed Showdown in Sarvertown at the 4/10-mile oval. The tour points leader raced to a convincing victory in the fourth heat on a slick track surface that was completely different than the heavy one he mastered on Thursday night.

“I think that's as slick as (the surface) will get tomorrow (in the Firecracker 100), so I feel pretty good about our chances,” said Richards, a five-time WoO winner this season who is hoping to make Saturday's $30,000-to-win blockbuster his first-ever victory in a crown-jewel event. “Usually when it's slick and I'm creeping around, nothing feels good (on the car). But tonight I actually had a good feel in that condition and that gives me some confidence.”

Both Francis and Lanigan won heats after installing backup engines in their cars earlier in the day. Francis found a broken lifter in the powerplant of his Beitler Motorsports Rocket after finishing fourth in Thursday's race, while Lanigan's Fusion Energy Rocket was sidelined by terminal motor problems as he led the Showdown in Sarvertown.

Lanigan enjoyed a perfect qualifying night, preceding his win in the first heat with the fastest lap in Ohlins Shocks Time Trials. He toured the track in 17.754 seconds to record his series-leading fourth fast-time honor of the 2009 season.

Lanigan, who finished second in last year's Firecracker 100 after leading laps 1-69, will seek to end a frustrating 45-race winless streak on the WoO in Saturday night's headliner.

Rick Eckert of York, Pa., who sits fourth in the WoO LMS points standings, grabbed the final transfer position in the first heat when he slid around the outside of New Bethlehem, Pa.'s Mike Blose exiting turn four with the checkered flag waving.

“I just threw it in on the top,” Eckert said. “It was the last lap and I didn't want to run the B-Main.”

Fifteen teams participated in the tournament-style event, which was contested on the track's homestretch. The crews had to change the right-rear tires on their cars in each round.

The Firecracker 100 weekend continues on Saturday with a full day of activities, starting at 12 noon with a driver-fan horseshoe tournament, a weenie roast and a driver question-and-session session in front of the fans. A driver autograph session is scheduled for 4 p.m. to 5 p.m., followed by B-Mains, the $3,000-to-win Uncle Sam 30 for non-qualifiers and the main event, the $30,000-to-win Firecracker 100.