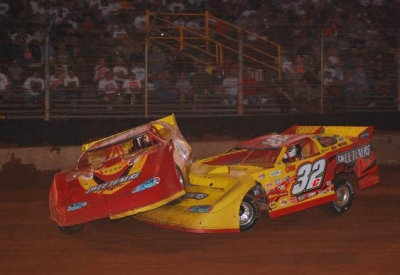 SARVER, Pa. (June 26) — Tim McCreadie of Watertown, N.Y., who returned last week from back injuries that sidelined him five months, barrel-rolled his car twice on the frontstretch at Lernerville Speedway during a Friday night heat race for the World of Outlaws Late Model Series Firecracker 100.

The 2006 WoO champion slid up in turn four and made contact with a competitor, getting his No. 39 sideways when he was struck by Vic Coffey's No. 32c. The contact with Coffey sent McCreadie's machine barrel-rolling down the homestretch on the 10th lap of the second heat race.

According to series reports, McCreadie climbed from his car with some assistance and walked to the ambulance to get checked by medical personnel, but he said he was OK.

The 35-year-old McCreadie was competing in just his fifth event since he fractured vertebra in a Jan. 15 crash at the Chili Bowl Midget Nationals in Tulsa, Okla. He won his fourth start in World of Outlaws competition on Tuesday at Canandaigua (N.Y.) Speedway, a half-mile oval he called home during much of his big-block modified career.