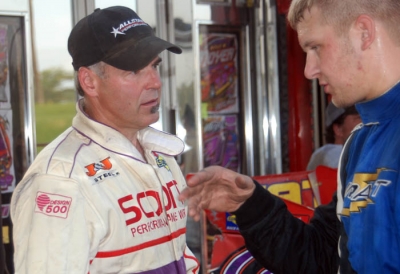 Winner Billy Moyer (left) talks with Will Vaught early in the evening. (DirtonDirt.com)

PADUCAH, Ky. (June 26) — On a track that's not his favorite where he says he never feels particularly comfortable, Billy Moyer was trying to feel things out at Paducah International Raceway during the 11th leg of the UMP DIRTcar Summernationals. | Slideshow | Complete Summernationals coverage

The outside front-row starter was cruising along in the lead when third-starting Jason Feger of Bloomington, Ill., cut down Moyer's near-straightaway lead and took command on the 19th lap of the 40-lap feature. That was the 51-year-old Moyer's call to get up on the wheel and show everything his No. 21 had.

"When he passed me, I had something left," the Batesville, Ark., driver said. "We usually try to have something left when we have to — that's what a good football player or basketball player does. He's always got some reserve in him when you've gotta do it."

Summoning his reserves, Moyer battled the next nine laps with Feger, going back ahead amid lapped traffic on lap 28 and racing to his 2009-leading fourth Summernationals victory and second in a row. It was also his second straight victory at Paducah, following a May 29 Northern Allstars Late Model Series victory at the 3/8-mile western Kentucky oval.

"I didn't really know how much room I ever had. I was just riding along there and the car felt pretty good, but I was being pretty cautious. When he went sneaking by there, I knew I had to get going then," said Moyer, the six-time series champion who leads the tour with 68 career victories. He has four wins in six 2009 starts. "We were pretty close, really. He did a good job. It was fun. We had a good race. .. We just ran each other clean and we didn't tear crap up and load it up and go tomorrow without having stuff bent up.

"When there's a high side like that, he runs good. You can't count him out when he's got a little berm and that wall to hold him in there. He stands on it."

Feger, gunning for his second victory in the last three nights, knew he'd have his hands full with Moyer after making the pass and facing a pair of lapped cars.

"Shannon (Babb) and Rodney (Melvin) were racing each other real hard, and I just never could get a good hole, and it seemed like a hole opened right up for him at the right time at the right place," the 31-year-old Feger said. "There's no doubt Billy's better than I am when he it comes to getting down on the racetrack and racing around with lapped traffic. It just kind of went his way.

"He's real good at changing his lines and going and finding something different ... I think when I passed him he probably went and started doing something a little different and got better again. He's just real patient and he's one of the best there is. It's hard to complain when you run second to a guy like that, let alone pass him and lead for a little bit."

Feger held on to finish second despite a deflating right-rear tire that went nearly flat by the time he got back to his pits. Randy Korte of Highland, Ill., rallied from his 11th starting spot to take third from eighth-starting Bill Frye of Greenbrier, Ark., on the race's lone restart at lap 33, and Korte's finish unofficially moved him past Dennis Erb Jr. of Carpentersville, Ill., in the Summernationals points chase.

Erb finished 12th. Polesitter Will Vaught of Crane, Mo., like Moyer driving a Victory Circle Chassis, ended up fifth. Brad Neat of Dunnville, Ky., ran in the top five most of the way but brought out the lap-33 yellow when his damaged left-front suspension slowed his No. 41.

Correction: Fixes Moyer's victory total in 2009; he has four wins

Kevin Weaver takes a provisional based on '08 UMP weekly points while Jeep Van Wormer gets the provisional for UMP series points. Kevin Cole gets the track provisional and plans to drive the No. 81jr of teammate Jason Riggs. Cole's No. 81c had engine problems and the No. 81jr also had carburetor problems, briefly catching fire at the conclusion of the B-Main. The team is scrambling to make repairs on the 81jr for the main event, which should start by 9:30 p.m.

Shannon Babb led all the way in the B-Main to transfer to the main event along with runner-up Ryan Unzicker. Dane Dacus was third ahead of Jason Riggs with Jeep Van Wormer, who challenged Unzicker late, finishing fifth after brushing the backstretch wall on the final lap. Tanner English won the night's C-Main. The street stock feature is scheduled for after the intermission, which began about 8:50 p.m., and the Late Model feature will follow.

With the heat winners drawing for the first four starting spots of the feature Will Vaught is on the pole position with another Victory Circle Chassis driver, Billy Moyer, alongside. Jason Feger starts inside row two with Duane Chamberlain starting fourth. The C-Main and B-Main are coming up to reset the remainder of the 21-car feature lineup.

Duane Chamberlain got the jump from outside the front row and led all the way for his second heat race victory during the series. Poleistter Bill Frye couldn't keep up and settled for second while fifth-starting Dennis Erb Jr. worked his way into third. Rodney Melvin was fourth and Dane Dacus missed transferring in the fifth spot. Randy Sellars scratched when a lift bar broke in hot laps and put a hole in the car's rear end. "That's one of them freak deals," Sellars said.

Becoming the first non-polesitter to win a heat, outside front-row starter Billy Moyer jumped out front and led all eight laps at a track where he won the Tri-Track Challenge four weeks earlier. Polesitter Terry English was second while Randy Korte was third, just ahead of Dylan Thompson. Ryan Unzicker was fifth and never in contention for a transfer spot. Jeep Van Wormer, back on the series after Sunday's victory at Tri-State Speedway in Haubstadt, Ind., ran a lackluster sixth.

Polesitter Jason Feger led all the way in the eight-lapper to easily outrun fellow front-row starter Brad Neat as the top finishers all ran the high groove. Terry Casey was third with Brian Shirley in the fourth and final transfer spot, just aehad of seventh-starting Shannon Babb. Jason McBride was a distant sixth.

Polesitter Will Vaught, running at the track where he flipped on the backstretch in last year's Summernationals event. led all the way for a victory over fellow front-row starter Chris Wall while third-finishing Scott James closed in on the top two in the final laps. Jeff Walston, winner of the last two regular-season features at Paducah, got the fourth and final transfer spot. Kevin Cole was running fifth when he dropped out on the sixth lap of the caution-free prelim. Kevin Weaver, third in series points, was a distant sixth.

Terry English of Benton, Ky., the winningest driver in track history, was fastest among 41 qualifiers for the 11th leg of the UMP DIRTcar Summernationals at Paducah International Raceway. English clicked off a lap of 15.698 seconds at the 3/8-mile western Kentucky oval to earn the pole position for the third heat.

The top four finishers from each of four heat races will transfer to the main event. Four drivers from the C-Main advance to the B-Main, which sends its top two finishers to the 21-car feature lineup. Three provisional starters round out the field.

Two-time and reigning series champion Dennis Erb Jr. of Carpentersville, Ill., leads the series points entering the event with Randy Korte and Kevin Weaver just behind him. ... Kevin Claycomb of Vincennes, Ind., who won last year's Summernationals event, isn't in competition, but Justin Rattliff of Campbellsville, Ky., is piloting a car for Claycomb's winning team, Evansville, Ind.-based Scott Clippinger Racing. ... Among newcomers to the series at Paducah are Brad Neat of Dunnville, Ky., and Chris Wall of Holden, La. ... Neat's lone Summernationals victory came in last year's opener at nearby Kentucky Lake Motor Speedway. ... Wall finished fourth in his last trip to Paducah for a May 14 Lucas Oil Late Model Dirt Series event. ... Scott Schmitt's team completed an engine swap after his father Gary Schmitt delivered a backup powerplant from the team's home base in Tonica, Ill. ... With the larger track, heat races are just eight laps instead of 10. ... Saturday's series event is scheduled for Fairbury (Ill.) American Legion Speedway.