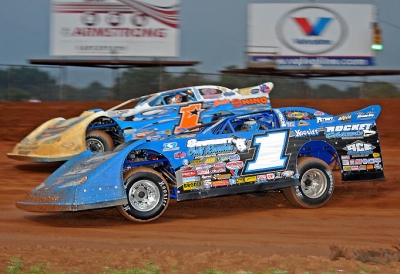 SARVER, Pa. (June 25) — The Great Northern Tour has been very good to Josh Richards. Continuing the hottest stretch of his World of Outlaws Late Model Series career, Richards rolled to his second straight and fifth overall victory of the season in Thursday's postponed 50-lap Showdown in Sarvertown at Lernerville Speedway. | Slideshow

Richards, 21, of Shinnston, W.Va., took advantage of the misfortune suffered by defending WoO champion Darrell Lanigan of Union, Ky., who started from the pole position and led laps 5-33 before engine problems ended his hopes during a caution period. The turn of events handed the top spot to Richards and he never looked back over the remaining distance.

The $10,600 triumph in a caution-plagued race held-over by rain from May 5 gave Richards four wins in six starts on the Great Northern Tour, which concludes on Friday and Saturday with the Firecracker 100 presented by GottaRace.com at Lernerville. It also gave him sole possession of the WoO points lead, pulling him out of a tie with Lanigan.

“Things have been going our way, but it can change at any time,” said Richards, whose 17th career WoO victory tied him with Scott Bloomquist of Mooresburg, Tenn., for third on the tour's win list since 2004. “I've seen it happen before, so we're going to enjoy this.

“We're just on a roll right now. We haven't been getting crazy with our adjustments like we have in the past and we've been doing better.”

Chub Frank of Bear Lake, Pa., chased Richards after Lanigan's departure but was unable to mount a serious challenge. He settled for second place, 2.277 seconds — nearly a full straightaway — behind Richards at the checkered flag.

Brady Smith of Solon Springs, Wis., survived a near-spin in turn four on the 20th lap to finish third in his Bloomquist Race Car, less than a car length ahead of Ashland, Ky's Steve Francis, who rallied from the rear of the field after contact on a lap-10 restart sent his Beitler Motorsports Rocket spinning into the infield on the backstretch. Shane Clanton of Locust Grove, Ga., who straightened Smith's car with a glancing hit on lap 20, placed fifth in his RSD Enterprises Rocket to register just his third top-five finish on the 2009 tour.

Richards, who started third, was looking forward to a late-race showdown with Lanigan but gladly drove through the open door to victory lane.

"When I moved up to Lanigan's lane (high on the track), I was running right up over top of him,” said Richards, who continued his successful week with the new Seubert Calf Ranches Rocket car that he debuted on June 18 at Ohsweken (Ontario) Speedway. “I was really hoping to race for the win with him, but he blew up right in front of me. That's unfortunate for him, but we'll take what we can get.”

A hot, humid night created vision problems for Richards (his helmet shield continually fogged up) and had him concerned about overheating his Cornett engine if there happened to be an extended green-flag run on the hammer-down racing surface (11 caution flags prevented that, however).

But his most anxious moment might have come on the final lap when he tangled with the track's ample cushion in turn four.

“Off four the cushion just kept getting taller and taller, and I just had to make sure I was bent before I got to it so I could just brush it off the corner,” said Richards. “But on the last lap I jumped over it and I didn't think I was gonna be able to make it to the checkered flag.”

Fortunately for Richards, he held a commanding edge on Frank, who started second but fell as far back as fourth after leading laps 1-4. The 47-year-old Frank had nothing for Richards but was satisfied after recording just his third top-five finish of the season and best finish since a runner-up on Sept. 13, 2008, at I-55 Raceway in Pevely, Mo.

“The only way I was gonna pass him was if he broke,” said Frank, who is riding a 52-race winless streak on the WoO. “But I'm happy — I'm happy to get a (substantial) paycheck. I haven't gotten one in a while.

“We made the right move when we changed (Rocket) cars after hot laps,” he added. “That (first) car was set up for the slick and I knew (the surface) was gonna be wide open.”

After tying Francis for the '09 WoO win lead with his fifth victory, Richards immediately turned his attention to this weekend's $30,000-to-win Firecracker 100. He would love to bag his coveted first crown-jewel event win at Lernerville, a track where he made his first-ever WoO start in 2004 and scored his first tour top-five finish in 2005.

“I know I'm capable of doing it, but we still have a lot to learn with our 100-lap program,” said Richards. “We've been fast in all these 50-lap shows, but a hundred laps is a whole different story. You gotta get yourself in position in time trials and heat races, and then the rest is driving conservative and being there at the end.”

Finishing sixth was 14th-starting Clint Smith of Senoia, Ga. followed by Rick Eckert of York, Pa., who came from the rear of the field after pitting to make a tire-compound change on lap 10.

Joining Lanigan as contenders who ran into engine trouble during the rough-and-tumble event were 17-year-old Austin Hubbard of Seaford, Del., who ran in the top five until retiring on lap 33, and Jason Covert of York Haven, Pa., who stopped on the track on lap 19.

The race was run under a threat of rain, forcing drivers to consider the possibility of a shortened event. But while lightning flashed in the sky repeatedly and light rain fell during the race's first 20 laps, the entire distance was completed. Thunderstorms did strike Lernerville Speedway after about 40 minutes of open practice for the Firecracker 100 were run.

Heat races and the first of two B-Mains for the ‘Showdown in Sarvertown' were completed on the original May 5 date. The second consolation race kicked off Thursday night's program with Lynn Geisler of Cranberry Township, Pa., emerging victorious.

The Firecracker 100 weekend rolls on Friday with time trials and heat races for the WoO, plus a postrace concert in the parking lot. Saturday's program will include last-chance races, the $3,000-to-win Uncle Sam 30 non-qualifiers' race and the Firecracker 100.