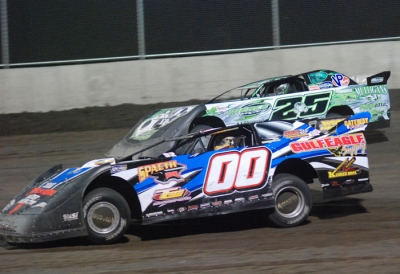 But what's a card without a birthday present? Feger provided a special gift, too, dramatically leading all 40 laps at the 3/8-mile oval and welcoming Tracy Feger to victory lane to celebrate his first-ever victory on the month-long tour.

Before anyone was blowing out any candles on a birthday cake, though, the 31-year-old Feger had plenty of work to do. Starting on the pole one night after blowing an engine at Charleston (Ill.) Speedway, Feger turned to his last functioning powerplant and mashed the gas to grab the lead while running the thin cushion ringing the track.

The driver known as the Highside Hustler fought off challenges from fellow front-row starter Scott James of Lawrenceburg, Ind., (who spun in turn four on the 13th lap) and last year's Tri-City Summernationals winner Billy Moyer of Batesville, Ark., through the first 25 laps of the race.

But Feger's stiffest challenges came Randy Korte of Highland, Ill., who ran an admittedly unorthodox line — "making the turns straightaways and making the straightaways turns," he said — by diving into turns one and three low on the wide racetrack while drifting up to gain ground, racing his way from his ninth starting spot up to second following a restart with 15 laps remaining.

A final caution for debris with less than 10 laps remaining set up a showdown with Feger, whose high side wasn't quite as reliable as before, and Korte, who aimed to cut across the corners and take the lead. Several times in the closing laps Korte nosed ahead in turns two and four, but he never had quite enough to get in front for good.

"The top was definitely going away there toward the end, and I knew it," Feger said. "I just knew, after running that many laps at that pace on the top side, I'd never be able to get it slowed down enough to get to the bottom, so I figured 'I'm going just have to stay up there and make it work until there's nothing left — or until I get passed.' Thankfully it was 40 laps, because I don't know if I'd been able to hold him off much longer."

"Randy's, he's a really good racer. ... We might rub a little here and there, but we're pretty good friends off the track, and you know you're going to get a hard race with him. He's not going to give you anything. He did a really good job. He could've tried to throw a dirty slide job or squeeze me into the wall, and he didn't do any of that. He ran a really good race."

Korte pushed Feger to the limit before settling for a second-place finish that unofficially moved him into a tie for the series points lead.

"All I could do was hope that Jason would screw up just once. He didn't screw up enough," Korte said. "When the top side is like that, Jason is probably the best in the business. I've never seen anybody get around the high side like he does.

"As long as we keep having finishes like this, I'm happy."

Moyer, the fast qualifier among 34 entrants, tried high and low to keep up with Feger but settled for third while two-time and reigning series champion lost ground early from his seventh starting spot but rallied back to finish fourth. Tenth-starting Brian Birkhofer of Muscatine, Iowa, who earned $10,000 at Tri-City's Lucas Oil Series-sanctioned FedEx 50 on Memorial Day weekend, started 10th and raced up to fourth before losing that spot to Erb in the final laps. Kevin Weaver of Gibson City, Ill., who entered the race leading the series points, started sixth but faded to finish 10th and unofficially dropped into a tight for the lead with Korte with Erb just three points back.

The feature was slowed by five cautions, none for serious incidents. Shannon Babb pulled in to change a shredded tire on the third lap (then later retired his smoking No. 18 to the infield) and Mark Voigt had a lap-nine flat. The lap-13 spin of James brought out the third caution, and the two cautions in the second half of the race were for a slowing Steve Casebolt and debris in turn one.

Feger, who earned $7,500 for an early-season victory at Kentucky Lake Motor Speedway and then $7,650 for a World of Outlaws Late Model Series victory at Charter Raceway Park in Beaver Dam, Wis., was glad to finally win on a tour he's run regularly in recent years.

"I tell you what, we started off the year really hot, and we've been in a big slump here lately. We just haven't been able to get things going our way. We've had some motor problems and just haven't been able to catch a break," Feger said, crediting Birkhofer with helping to point him in the right direction with some changes on his Pierce Race Car. "My crew man, they've been working their tails off this whole Summernationals. This is a really tough deal and we've been at each other a little bit here and there because we've been struggling and it's been hot. ... this will definitely help us out and help us get down the road."

A high-running Shannon Babb made an outside move to take the lead on the second lap and cruised the rest of the 12-lap consolation to make the feature lineup. Brent Kreke moved past polesitter BIlly Moyer Jr. a few laps later and then pulled away himself to lock up the second and final transfer spot. Moyer finished a distant third in the caution-free prelim. Steve Sheppard Jr. finished back in the pack and Terry Casey pulled out early, but both are in line for provisional starting spots (Casey based on series points, Sheppard based on '08 UMP points). The track will add at least one more starter to the feature lineup.

Jason Feger and Scott James got front-row spots for the 40-lap feature as the heat winners redrew for the top four spots. Rodney Melvin will start inside the second row alongside fast qualifier Billy Moyer. Feger is back in his own car after engine problems forced him into Brandon Thirlby's machine. Feger down to his last functioning powerplant with three others in various states of repair. In other news before the B-Main, Terry Casey has unloaded a backup car and the team is thrashing to make preparations for the final prelim.

Officials initially planned on running a C-Main and B-Main, but with a few drivers scratching, there will be only a B-Main. Billy Moyer Jr. and Mike Hammerle are unofficially scheduled to start on the front row of that consolation race. Two drivers from the B-Main will transfer to the main event along with three provisional starters (one of those is almost certainly Steve Sheppard Jr. according to series points).

With virtually everyone running up high, outside front-row starter Jason Feger outran polesitter Will Vaught early and raced to a straightaway victory. Vaught was second with Mark Voigt, last Friday's winner at Tri-City, in third. Terry Casey held the fourth spot most of the way, but Billy Laycock — the only low-running driver — slipped underneath Casey exiting turn four heading for the white flag. Casey's car showed smoke through much of the race but he held on to finish fifth over seventh-starting Shannon Babb in the caution-free prelim.

In a groove-swapping, lead-swapping, front-row battle among drivers with six UMP weekly crowns between them, Dennis Erb Jr. slipped under Rodney Melvin on the seventh lap, only to see Melvin go back underneath at the white flag and hold on for a victory. Erb ran the high side through the first half of the race with Melvin down low, but when Melvin took command, Erb moved down low and went ahead in turn three in perhaps the best heat since opening night in Brownstown, Ind. The top two finished far ahead of third-finishing Steve Casebolt, who secured that spot when Michael Kloos spun in turn four on the final lap. That boosted seventh-starting Brandon Sheppard into the fourth and final transfer spot as Kloos fell back to seventh. In the race's lone caution, Donny Walden spun in turn four on the third lap.

Outside front-row starter Scott James rode the cushion to a victory, shaking off an early challenge from third-starting Kevin Weaver and pulling away midway through the race. Weaver rallied back to within a few lengths at the finish for second place whlie polesitter Brian Birkhofer, who slipped immediately third, held that spot well behind the frontrunners the rest of the way. Duane Chamberlain was further back in the fourth and final transfer spot. Mike Hammerle edged Scott Schmitt for fifth.

Polesitter Billy Moyer led all the way for an easy victory while Brian Shirley won a tight battle for second over fellow second-row starter Randy Korte. Ryan Unzicker, who started on the tail after missing his time trail lap, rallied to get the fourth and final transfer spot and avoid a disastrous night. Billy Moyer Jr. nipped front-row starter Jason McBride as McBride got too high between turns three and four late in the race. Chad Zobrist spun twice in turn three, the first time righting his car without causing a cuation, but drawing a yellow the next time.

Track record-holder Billy Moyer of Batesville, Ark., was fastest overall among 34 qualifiers at Tri-City Speedway for the ninth leg of the UMP DIRTcar Summernationals. Moyer's lap of 15.177 seconds put him on the pole position for the first heat.

Other drivers who topped qualifying in their groups to earn pole positions in heat races were Brian Birkhofer (15.499) of Muscatine, Iowa; last night's winner Rodney Melvin (15.557), Benton, Ill.; and Will Vaught (15.598) of Crane, Mo.

A hot and steamy day has been cooled somewhat by cloud cover in the area and temperatures in the 90s earlier in the day have dropped into the high 80s at the 3/8-mile oval near St. Louis, Mo. ... Only three of 34 entrants haven't entered a previous series event in 2009: Billy Laycock of Marine, Ill.; teenager Austin Rettig of Sikeston, Mo.; and Dewayne Kiefer of St. Genevieve, Mo., a regular on the series last season. ... Jason McBride of Carbondale, Ill., is back on the tour after skipping Tuesday's race in Charleston, Ill. ... During hot laps, Jason Feger of Bloomington, Ill., covered up his No. 25 with a piece of white posterboard wishing his mother Tracy a happy 50th birthday. ... The track record at Tri-City for the 3/8-mile configuration (shortened from a half-mile) belongs to Billy Moyer at 14.144 seconds, set at last year's Summernationals event. ... UMP modifieds and UMP sportsman drivers are also in action. ... Ryan Unzicker scratched from qualifying, but was given a warm-up later following time trials to make sure his car was ready to go. ... Tim Manville didn't trip the timing clock on his first time trial lap, and he jumped the cushion on the second lap.