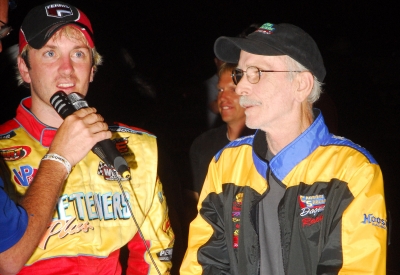 CANANDAIGUA, N.Y. (June 23) — Tim McCreadie is back. The sensational driver from Watertown, N.Y., quickly validated his return from a back injury that had sidelined him since January, winning Tuesday night's 40-lap World of Outlaws Late Model Series Great Northern Tour feature at Canandaigua Speedway.

It was an emotional triumph for McCreadie, who thrilled the partisan crowd that packed the stands of the half-mile oval he called home during much of his big-block modified career. The 2006 WoO champion was swamped in Victory Lane by a horde of happy well-wishers, including his father, legendary big-block modified driver "Barefoot" Bob McCreadie.

McCreadie's victory came in just his fourth start since returning from the fractured vertebra he suffered on Jan. 15 in a wild crash during qualifying for the Chili Bowl Midget Nationals in Tulsa, Okla.

“This is just amazing,” said McCreadie, who pocketed $7,200 for his 12th career WoO victory. “To win here, in front of these people at one of my home tracks, and with my dad here — it's such a cool feeling.

“It's just so great to be back racing. Like I've told a lot of people – it's been six months (on the sidelines), but it feels like it's been 10 years.”

“I wanted (to win) last night (at Can-Am) real bad, but we finished second because (Rick) Eckert out-drove us and had a better car,” McCreadie said. “That was disappointing, but tonight I think we did the same.”

Indeed, McCreadie, 35, was the class of the field at Canandaigua. After inheriting the lead when another former big-block regular, polesitter Tim Fuller of Watertown, N.Y., retired with a broken driveshaft during a lap-four caution period, McCreadie was untouchable over the final 36 circuits of non-stop racing.

Former WoO champion Steve Francis of Ashland, Ky., briefly nosed his Beitler Motorsports Rocket inside McCreadie's Sweeteners Plus Rocket on lap 14, but McCreadie proceeded to build a commanding edge. McCreadie crossed the finish line 6.182 seconds — more than a full straightaway — ahead of Francis.

Brady Smith of Solon Springs, Wis., finished third in his Bloomquist Race Car right on the rear bumper of Francis. York, Pa.'s Eckert settled for fourth place with a tight-handling Bloomquist car after starting from the outside pole, and former Canandaigua big-block modified regular Vic Coffey of Caledonia, N.Y., held on to finish fifth despite battling brake issues with his Sweeteners Plus Rocket.

Defending WoO titlist Darrell Lanigan of Union, Ky., and 14th-starting Chub Frank of Bear Lake, Pa., finished sixth and seventh, the last drivers on the lead lap at the finish.

McCreadie kept his machine snug to the inside of the track throughout the distance, running a line perfected by several big-block Modified stars who have dominated at the track known as the Land of Legends.

“I think I spent seven years watching guys like Bob McCreadie and Alan Johnson get in that hub, get in that hub,” said McCreadie, who won 14 DIRTcar big-block Mod features at Canandaigua from 1999-2002, “and damn if I didn't do it one time right.”

McCreadie said those words in victory lane and then walked over to hug his father, who hasn't raced since suffering a broken leg and other injuries in a 2005 motorcycle accident. Moments later the elder McCreadie brought down the house when WoO announcer Rick Eshelman mentioned the fact that the leader McCreadie's career win total at Canandaigua stands at 99.

“Well, it's 100 now,” said Bob McCreadie, beaming after watching his son win a WoO feature in person for the first time.

The feel-good nature of the race was not lost on the drivers who futilely chased McCreadie.

“If I have to run second, I couldn't find a better place to do it than here tonight,” said Francis, who asserted that he “had nothing” for McCreadie. “Coming back and winning this race is a special deal for Timmy. He's a close personal friend of mine and I'm happy to see him back racing.”

The 32-year-old Smith, meanwhile, was in awe of the post-race scene.

“I think it's so cool to see him win here in front of all his fans,” said Smith, a first-year WoO regular who made his first-ever start at Canandaigua. “Timmy's a great guy, and I'm glad to see him back in a race car and doing what he loves.”

Finishing one lap down in positions 8-10 was 13th-starter Tony Knowles of Tyrone, Ga., who scored a top-10 finish at Canandaigua for the second consecutive year; Gregg Satterlee of Rochester Mills, N.Y., who registered his second straight top-10 run on the Great Northern Tour; and 16th-starter Clint Smith of Senoia, Ga.

Josh Richards of Shinnston, W.Va., who entered the night leading the WoO points standings, experienced a tough outing, bringing out two of the race's three caution flags. He slowed on lap three with what he thought was a flat tire, then slowed again on lap four when his car's left-rear tire did go flat. The 21-year-old rallied to salvage an 11th-place finish.

The evening ended with Francis and Lanigan tied for the WoO points lead. Richards slipped to third (-6 points) and Eckert sits fourth (-10 points) in the hotly-contested battle through 18 events.

The Great Northern Tour continues on Wednesday at Big Diamond Raceway in Minersville, Pa., before heading to Lernerville Speedway in Sarver, Pa., for a spectacular three-day finale. The postponed Showdown in Sarvertown (a B-Main and 50-lap A-Main held-over from May 5) will be completed on Thursday and the $30,000-to-win Firecracker 100 presented by GottaRace.com will take center stage on June 26-27.